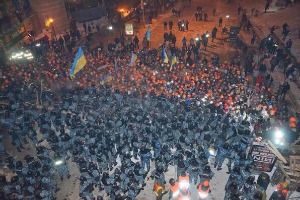 Ukrainian anti-riot forces took the central square of Kyiv by storm last night, clashing with protestors just hours after EU foreign policy chief Catherine Ashton had met Ukrainian President Viktor Yanukovich to repeat that the door remained open for him to sign an Association Agreement with the European Union.

The latest developments in Ukraine appear as an affront to the EU, as Ashton had come to Kyiv to agree a roadmap with Yanukovich and opposition leaders leading to the signature of the EU-Ukraine Association Agreement some time next spring.

US assistant secretary of state Victoria Nuland had also come to Kyiv in an effort to prevent Ukraine from joining Russia’s Customs Union.

Ashton visited Kyiv's central square, the Maidan, yesterday (10 December), which has been occupied by protestors for the last ten days, since Yanukovich made a geopolitical U-turn towards Russia. She was received “as a rock star” according to citizens on Twitter. She also met with Yanukovich for a three-and-a-half hour long discussion.

But as soon as Ashton had her back turned, riot police entered Maidan, tearing down barricades erected by the protesters. Clashes broke out as police tried to detain some of the protesters. On one of the main streets leading into the square, a large group of protesters in hard hats, appointed to protect the demonstrators, held back a separate unit of riot police.

The Ukrainian news agency Unian wrote that the Ministry of Interior had dubbed the operation “amenities of territory”, as it was reportedly aimed at “lifting obstacles for citizens who live or work in the capital”.

According to a statement by the ministry, special forces “made no use of tear gas or other special means with respect to protestors”.

At 5 a.m. CET Ashton tweeted through her spokesperson’s account that “the authorities did not need to act under the coverage of night to engage with society by using force”.

According to Reuters, clashes broke out between the protesters' security guards and the police as they tried to make arrests. The Interfax news agency said some people had been hurt but it could not give an exact tally.

Linas Linkevi?ius, the foreign minister of Lithuania, the country holding the rotating EU presidency, made a statement indicating that EU’s patience with Yanukovich was running short.

“Tonight’s events in the Independence Square in Kiev have shown the conscious choice that the Ukrainian authorities appear to have taken against the European path, the choice which is opposite to what the President of Ukraine has been saying publicly,” Linkevi?ius said.

The Lithuanian minister repeated EU calls to the Ukrainian authorities to stop any violent actions and provocations immediately, investigate all cases of violence and to punish those responsible.

Reportedly, students who have been badly beaten have mysteriously disappeared, and some protestors have been detained. Also, some media and the political party Batkivschchyna (Fatherland) of former Prime Minister Yulia Tymoshenko have been raided. “The Ukrainian authorities have over a short period of time, especially over this night, lost a lot of credibility. Only by taking the immediate steps to abide by the European values can they start a long way towards reestablishing trust,” Linkevi?ius said.

Speaking on television yesterday, Yanukovich showed no indication of giving in to protesters' demands for the dismissal of his government. He defended his policy shift back to Russia, saying that Ukraine had no choice but to restore close trade relations with Moscow.

"We cannot talk about the future without talking about restoring trade relations with Russia," Yanukovich said in televised comments. He added he was also committed to European integration – wording he has often used since his government turned its back on a trade pact with the EU on 21 November.

US State Secretary John Kerry published a statement on the events in Ukraine yesterday night. “The United States expresses its disgust with the decision of Ukrainian authorities to meet the peaceful protest in Kyiv’s Maidan Square with riot police, bulldozers, and batons, rather than with respect for democratic rights and human dignity. This response is neither acceptable nor does it befit a democracy,” Kerry stated.

The US State Secretary calls for “utmost restraint” and warns that the Ukrainian authorities “bear full responsibility for the security of the Ukrainian people”.

“As church bells ring tonight amidst the smoke in the streets of Kyiv, the United States stands with the people of Ukraine. They deserve better,” Kerry said.

Ukrainian citizens wrote on Twitter that the bells of Kyiv's churches were ringing, “like during attacks on the city in the Middle Ages”.

Ukrainian commentators blamed the opposition for not being courageous enough to inspire a real revolution. Many consider that the Ukrainian revolution had died before it was born.

The International Federation of Journalists (IFJ) and the European Federation of Journalists (EFJ) have called on authorities in Ukraine to carry out an immediate and thorough investigation into the raids yesterday, Monday 9 December, on three Kiev-based opposition news agencies by unidentified armed individuals reportedly dressed like members of Ukraine's Special Forces. According to media reports, raids took place at 6pm on the offices of the newspaper Vechirni Visti, the online TV station INTV and the news website Cenzor.net, at the same time that riot police started to disperse those people involved in anti-government demonstrations. Reports say that the men who carried out the raids wore helmets and uniforms similar to those used by the ‘Berkut' Special Forces. Some also wore masks and scarves to cover their faces.

"Following the latest raids on media agencies in Kiev, it is clear that the disregard for the basic rights and freedoms of journalists in the country is continuing," said IFJ President Jim Boumelha. "We call for an immediate and thorough investigation into all of these cases and demand an end to impunity for violence against media workers in Ukraine." The IFJ/EFJ's Ukrainian affiliates, the Independent Media Trade-Union of Ukraine (IMTUU) and the National Union of Journalists of Ukraine (NUJU), have reported that nearly half of the 50+ journalists who were attacked whilst covering the demonstrations from 29 November - 1 December have filed reports with police. The IFJ/EFJ have welcomed the courage of the journalists and commended the support and guidance its Ukrainian affiliates have given to media workers in recent weeks.   "We fully support those journalists who have shown the courage and conviction to file formal complaints following the brutal attacks they were subjected during the protests and we join our Ukrainian affiliates to call for the journalist community in Ukraine to stand in solidarity during this traumatic period," said EFJ President Mogens Blicher Bjerregård.

The Alliance of Liberals and Democrats for Europe President Sir Graham Watson has told the European Parliament yesterday (10 December) it is time to speak openly about the international role of the Russian Federation – the “elephant in the room” in Ukraine.

Speaking during a plenary session in Strasbourg, Watson called on the EU to send a fully-fledged mission to Kiev to map out a path for Ukraine in Europe.

Referring to the Orange Revolution of 2004-5, Watson said: “What we see today is reminiscent of what we saw ten years ago. We have to make it clear to the Ukrainian government that we deplore the violence. The EU head of diplomacy, Catherine Ashton, must engage with the authorities and with the opposition.”