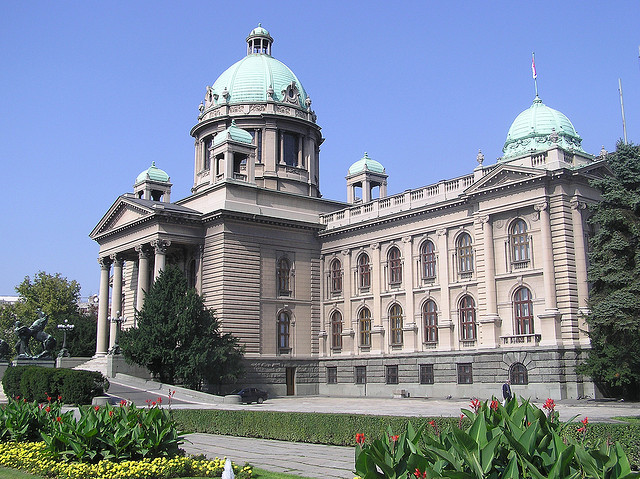 A four-day visit by the Russian Deputy Prime Minister Dmitry Rogozin to Belgrade has focussed on highly-sensitive issues such as arms, migration and NATO – and has been overshadowed by some undiplomatic language.

Because of Serbia’s delicate diplomatic positioning between EU aspirations and its existent strong political ties with Russia, any visit from Moscow is always demanding – but this time the tensions have been more pronounced.

Rogozin met with Prime Minister Aleksandar Vu?i?, Foreign Affairs Minister Ivica Da?i? and President Tomislav Nikoli?. The most contentious issue was further arms procurement from Russia, in the light of the announcement that Croatia – now a NATO member – had procured ballistic missiles.

Da?i? said that the step by Croatia disturbed the balance in the region because the missiles system to be acquired by Croatia “can reach Belgrade”. Vu?i? said he was “concerned” because some other countries in the region were in NATO whilst Serbia was militarily neutral.

There were no indications on the concrete demands of Serbia and on the price Serbia would have to pay. Vu?i? said Serbia presented its needs, and that it is now on the Russian side to review the possibility for offer.

On January 11, Rogozin gave Vu?i? a model of the surface-to-air missile system S-300 and said Russia would support Serbia as its ally in the region, pointing back to the NATO bombing campaign against Serbia in 1999 and saying that such events could not happen again with the S-300 system in place.

>>Read: Montenegro: we can play a disproportionately large role in NATO

Rogozin also met an opposition figure from the extreme right, Vojislav Šešelj, who is on trial at the Hague’s International Criminal Tribunal for the Former Yugoslavia.

Another problematic issue during the visit were Rogozin’s comments on harmonisation with the EU and migration crisis. According to Belgrade media, Rogozin warned Serbia on January 12 to be cautious when harmonising its foreign policy with that of the EU, in order not to be in a situation in which “women are afraid to go out in the street” because of migrants – alluding to the incidents in Cologne on New Year’s Eve.

“As for whether Serbia might experience a scenario that Rogozin has predicted – I think that he should worry about his own country and let us worry about ours,” Serbia’s Deputy Prime Minister Zorana Mihajlovi? told reporters in Belgrade.

But the anti-EU Democratic Party called on her to retract this statement.

“Did it bother her that [Rogozin] said Serbia should be cautious about adjusting Serbia’s foreign policy to the EU’s and that Serbia was under threat from the uncontrolled migrant inflow? Did it bother her that Russia had clearly stated that for Serbia, there were no limits whatever regarding weapons deliveries?” asked the Democratic Party’s President Raškovi? Ivi?.

0 responses to “Rogozin criticizes Croatia and Montenegro during Serbia trip”