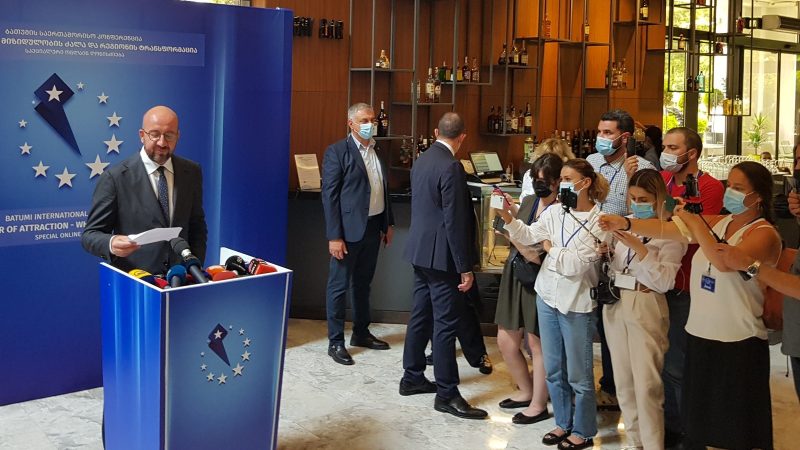 Charles Michel reads a stern message in Batumi on 19 July, regretting the lack of progress in his mediation. [Georgi Gotev]

The US embassy slammed the move while Michel repeated that there was “no alternative” to the agreement.

The head of the Georgian Dream, Irakli Kobakhidze, stated on Wednesday that the agreement initiated by Michel ‘had completed its mission’ and accused opposition parties, in particular, the United National Movement (UNM), of failing to fulfil the agreement.

“The United States is deeply disturbed and exasperated by the unilateral decision of the Georgian Dream party to withdraw from the 19 April Agreement, a document established through six months of difficult but collaborative negotiations, and one that gives an urgently-needed way forward for the Georgian people and their democracy,” the US embassy in Tbilisi said in a statement on Thursday.

In April, after a long mediation effort, unusual for a Council President, Michel declared that the long-lasting political crisis in Georgia was resolved.

With hindsight, his statement was over-optimistic. When Michel visited Georgia on 19 July, on the occasion of a trilateral summit with the presidents of Ukraine and Belarus, he dedicated half of his time to further mediation between the Georgian political forces.

Georgian Dream used to blame for the stalemate UNM, their arch-foe, led by former president Mikheil Saakashvili, who lives in exile in Ukraine. Western embassies largely bought this narrative, but the new move makes it no longer viable.

The first to react were Georgian civil society organisations who said the Georgian Dream’s decision to back out of the 19 April agreement constituted “a straightforward rejection of Georgia’s Euro-Atlantic course and the peaceful development of the country through democratic reforms’.

Transparency International Georgia, which is one of the 21 signatories of the statement, tweeted:

Withdrawal from the @eucopresident brokered #April19agreement only serves a desire to retain power, for which @GeorgianDream41 is ready to sacrifice 🇬🇪's prosperity, western orientation, democratic development and relations with strategic partners.https://t.co/4HdGDhtrgy

After the US reaction on Thursday, Michel issued a statement “taking note” of the development and stressing that he sees no alternative to this agreement, which in his words is the best way to advance a reform agenda that would strengthen the democratic institutions of Georgia.

Met yesterday with @Zourabichvili_S to discuss the political situation in 🇬🇪 and 🇪🇺 relations.

Consultations in #Georgia are starting. 19 April agreement is the best way to advance a reform agenda.

I call on all parties to put citizens' interests first.https://t.co/nYLxNAueKR pic.twitter.com/3AzKEe27Ce

Commentators generally agree that no matter what the roots of the internal divisions in Georgia are, they benefit Vladimir Putin’s Russia, which used turmoil in Georgia in 2008 to take control of 20% of the country’s territory.