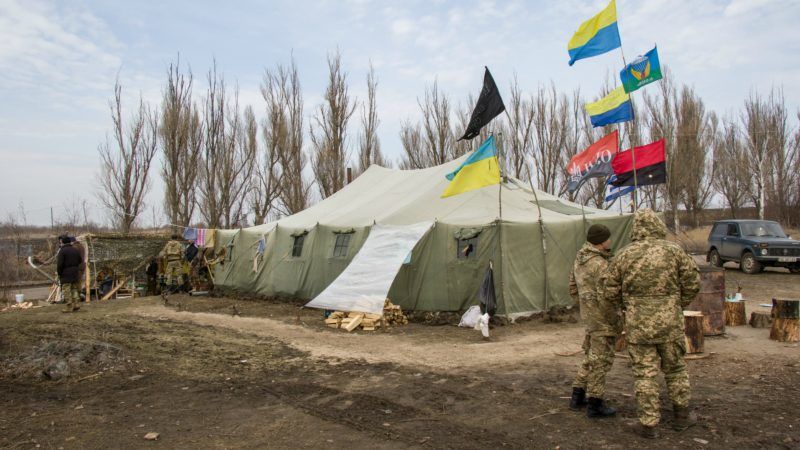 Ukrainian activists sit at their checkpoint as they block a road that runs between Mariupol and Donetsk. Bugas, 2 March. [Sergey Vaganov/EPA]

A draft resolution obtained by AFP called for setting up the new mission for a period of six months with a mandate to ensure the safety of the observers from the Organisation for Security and Cooperation in Europe.

Russian President Vladimir Putin earlier told a news conference in the Chinese city of Xiamen that the new mission would be “completely appropriate”, but Ukraine’s foreign ministry quickly set down conditions for the deployment.

Ukraine said no Russian troops should be part of the protection force and stressed it must give its approval for the deployment.

The Russian-drafted proposal would deploy a mission “equipped with small arms and light weapons mandated exclusively to ensure security” of the observers.

The draft resolution requests that UN Secretary-General Antonio Guterres provide recommendations to the Security Council on the size and national composition of the force.

The mission would be deployed after a “complete disengagement of the forces and equipment from the factual line of contact” between Ukrainian troops and Russian-backed rebels.

Its mandate and personnel makeup would be agreed with the government of Ukraine and with representatives from the Donetsk and Lugansk regions, which are seeking to break away from Ukraine.

Russian Ambassador Vassily Nebenzia said there were no immediate plans to call for a vote on the proposed resolution.

“We are not talking about voting yet. We are circulating it for consideration,” he told reporters.

Some 600 international OSCE observers are on the ground in eastern Ukraine, but their presence has failed to stop fighting in a conflict that has killed 10,000 people since 2014.

Ukraine – which in 2015 called for UN peacekeepers to be sent in – accuses Russia of being behind the insurgency that has gripped swathes of its former industrial heartland.

Ukraine’s Ambassador Volodymyr Yelchenko said the mission should also be deployed on the border between Russia and Ukraine to help monitors report on flows of weapons and fighters that Kyiv maintains are coming from Russia.