Russia ban from SWIFT on the table as Germany drops opposition 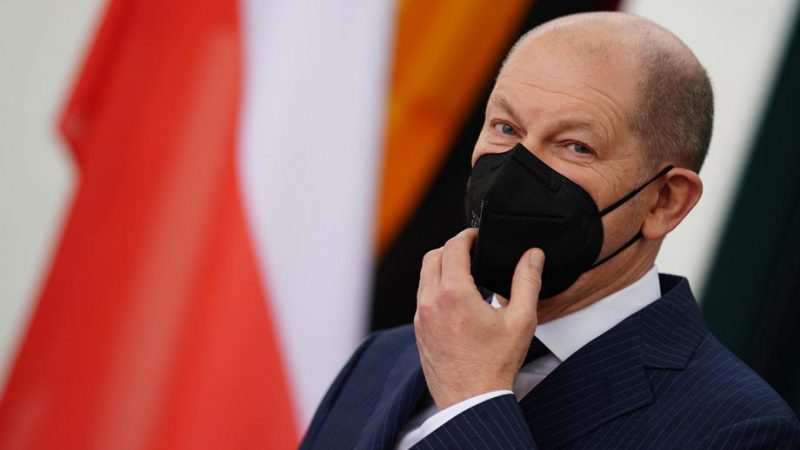 German Chancellor Olaf Scholz exits the Chancellery prior to the arrival of Polish Prime Minister at the Chancellery in Berlin, Germany, 26 February 2022. [EPA-EFE/CLEMENS BILAN]

The EU is set to enforce a ban on Russia’s access to the SWIFT international payments system after the last holdout among the EU27, Germany, dropped its opposition in principle, allowing the bloc to step up sanctions against Moscow following its invasion of Ukraine.

“We are working flat out on how the collateral damage of a decoupling from SWIFT can be limited in such a way that it hits the right people,” Germany’s Foreign Minister Anna Baerbock and Economy Minister Robert Habeck said.

“What we need is a targeted and functional limitation of SWIFT,” they added in a joint statement.

EURACTIV understand this effectively means Berlin has dropped its veto. However, it is not yet clear how the German government exactly aims to make the SWIFT restrictions more “targeted”.

“I came to Berlin to shake the conscience of Germany so that they would finally decide on truly harsh sanctions that will influence the Kremlin’s decisions,” Morawiecki told reporters outside Scholz’s office.

Both leaders said they will urge the EU to go further in their support for Ukraine.

German Chancellor Olaf Scholz had said he would be against including the SWIFT international payments system in new EU sanctions against Russia when speaking in Brussels at an EU summit on Thursday (24 February), insisting this option should be kept for later.

SWIFT has been one of the bones of contention when EU leaders met to discuss the second sanctions package on Russia, for which the option had not been on the table.

Eastern Europeans, Baltics and some Nordics, all indicated they favour a ban. EU members such as Germany, Italy and Austria, highly dependent on gas, had been reluctant to take such a step since European countries use SWIFT to pay for Russian gas.

Just as the previous two sanction packages, the decision requires unanimity among all 27 member states.
Earlier this week, Ukrainian Foreign Minister Dmytro Kuleba expressed his anger and displeasure at EU reluctance, warning that the “European and US politicians would have blood on their hands if they failed to impose the heaviest toll on Moscow by cutting Russia from the so-called SWIFT payments system.”
On Saturday, Kuleba said: “I urged to immediately introduce the third package of EU sanctions to stop Russian invasion.”

With Russian and Ukrainian forces clashing on the outskirts of Kyiv, and Western military officials saying they are less optimistic about whether the Ukrainian capital can withstand, the moment to discuss SWIFT might have arrived, several EU diplomats told EURACTIV.

“It is not unlikely that, provided all member states agree to consider the option, we could bring this on the way in the next few days if the situation in Ukraine further deteriorates, which it effectively already has, with Russian troops closing in on Kyiv,” one EU diplomat told EURACTIV.

The EU’s chief diplomat, Josep Borrell, said on Friday a decision on SWIFT could happen in the “coming days.”

According to EU diplomats, an extraordinary foreign ministers meeting is scheduled for Sunday evening (27 February) for 18:00 CET to discuss further sanctions, which could include a discussion among member states to consider throwing Russia out of SWIFT.

In a communiqué issued earlier on Friday, EU finance ministers said they had asked the European Commission and the European Central Bank “to assess the consequences of cutting off Russian institutions’ access to the financial system even further. All options are on the table.”

France, who currently holds the EU Council presidency, said Paris would not be opposed in principle to cutting Russia from SWIFT.

“SWIFT is the financial nuclear weapon,” French Finance Minister Bruno Le Maire said after a meeting of EU finance ministers. “The fact remains that when you have a nuclear weapon in your hands, you think before you use it. Some member countries have expressed reservations, we take them into account.”

“France is not one of these countries, I want to say this very clearly,” he added.

“We are not reluctant to use all the necessary weapons, without exception, against the Russia of Vladimir Putin, but there must be a European consensus,” Le Maire said, noting that “it’s understandable that some countries” would consider the economic impact before adopting more extensive sanctions options.

Italy, which had been reluctant to take that step, will support any EU line on sanctions against Russia, including measures on the SWIFT global payment system, Prime Minister Mario Draghi’s office said on Saturday.

Draghi held a phone conversation with Ukrainian President Volodymyr Zelenskiy on Saturday, confirming his support for the step.

Cyprus, which has extensive business links with both Russia and Ukraine, was speculated to be among countries with reservations about quickly ejecting Moscow from SWIFT.

However, Cypriot Finance Minister Constantinos Petrides said on Saturday that “in the name of EU unity and solidarity to Ukrainian people, Cyprus has NOT objected to ANY EU sanctions including cutting Russia off SWIFT”.

“Everything is on the table.”

Western nations threatened to exclude Russia from SWIFT in 2014 following its annexation of Crimea, but stopped short of such an option.

Such a step from the Western side would mark a further escalation from the two concerted sanctions imposed by Western powers against Russia earlier this week, including rare sanctions aimed personally at Russian President Vladimir Putin and Foreign Minister Sergey Lavrov.

The United States, Canada and Britain reiterated on Friday (25 February) they could act to exclude Russia from SWIFT in a further round of sanctions aimed at halting Russia’s invasion of Ukraine.

Earlier this week, US President Joe Biden initially ruled out removing Russia from SWIFT despite calls to do so from a number of US lawmakers, world leaders and Ukrainian officials.

“Right now that’s not the position that the rest of Europe wishes to take,” Biden quipped when announcing a batch of US sanctions on Thursday.

What would that mean in practice?

SWIFT, founded in 1973, is a member-owned cooperative based in Belgium that provides secure global financial messaging services and allows banks to execute payments and transfers of other financial instruments across national borders.

It links more than 11,000 institutions across more than 200 countries.

Exclusion from SWIFT would mean that there would be no possibility to execute transactions between Russia and most of the rest of the world with immediate effect. With the German government aiming for a “targeted” restriction, it is not yet clear how many transactions will be affected.

An exclusion from SWIFT would not directly affect bank transfers within Russia and between Russia and China. For both cases, parallel systems have been developed.

There are ways for banks to do international transactions without SWIFT, but they are expensive, complex, and require a high degree of interbank trust.

Meanwhile, more than half of Russian government revenues are generated through fossil fuel exports. Through an exclusion from SWIFT, most of these exports would not be paid anymore, which would lead to a deterioration of Russian government finances and could likely limit its ability to finance war efforts.

As Russia would not be able to be paid for its gas exports anymore, Moscow would most probably be forced to stop gas exports to Europe, which could cause a spike of already high gas prices, hitting the EU economy as a whole, but especially those countries that are highly dependent on Russian gas.

This would include several mainly Eastern European countries, Germany, and Italy.

Moreover, the cut-off from most international payments could throw the Russian economy into recession.

In the past, SWIFT has resisted calls to impose bans on certain countries, describing itself as neutral. But in 2012, the EU barred SWIFT from serving Iranian firms and individuals sanctioned in relation to Tehran’s nuclear programme.

According to expert, this has set a precedent for action against Russia.

***Oliver Noyan contributed to this article.