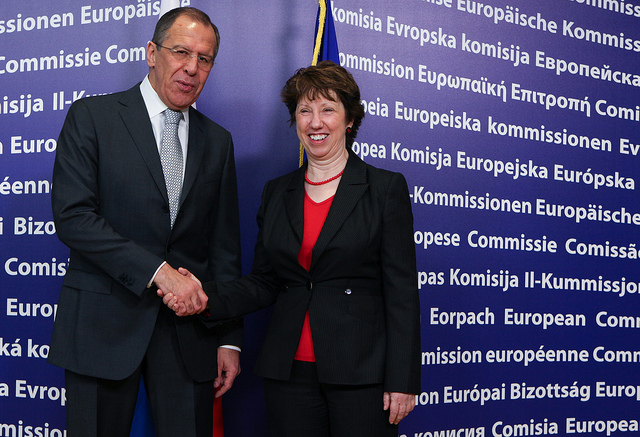 As fighting intensified in Ukraine on Monday (28 July), a diplomatic battle also raged, with Berlin warning that new European sanctions would send a “strong signal” to Moscow, and Russia saying the measures could only boost its economic independence.

Foreign Minister Sergei Lavrov said Moscow had no intention of imposing tit-for-tat sanctions, the day before the 28-nation European Union was set to finalise a package of measures that may close the bloc’s capital markets to Russian state banks.

“I assure you, we will overcome any difficulties that may arise in certain areas of the economy, and maybe we will become more independent and more confident in our own strength,” Lavrov said.

“We can’t ignore it. But to fall into hysterics and respond to a blow with a blow is not worthy of a major country,” he told a news conference, adding that the sanctions against Russia would be unlikely to achieve their goal.

The sanctions, and any retaliatory measures, could affect BP , whose 19.75% holding in Russian oil producer Rosneft leaves it exposed to the Russian economy.

Lavrov said he hoped for an objective investigation into the crash of the Malaysia Airlines flight that was downed over territory held by Russian-backed separatists in eastern Ukraine, killing all 298 people on board.

The West says flight MH17 was almost certainly shot down by pro-Russian separatists using a Russian-supplied surface-to-air missile. Russia has denied supplying such a missile.

Germany, Europe’s biggest exporter to Russia, had been reluctant to agree to heavier sanctions, but spokeswoman Christiane Wirtz said MH17 case had changed that.

“After the crash of the passenger plane MH17, a completely new situation came about which makes further measures necessary,” Wirtz said at a government news conference.

“Only such a substantial package would enable the German government and the EU to send a clear, strong signal to Russia.”

EU states are expected to reach a final decision on Tuesday on measures that also may include, in addition to capital markets restrictions, an embargo on arms sales and limits on dual-use and energy technologies.

The EU added new names on Friday to its list of individuals and companies facing travel bans and asset freezes.

Russia warned sanctions could hamper cooperation over security issues. Russian state development bank Vnesheconombank (VEB) has said it is counting on state support after US sanctions closed long-term funding on it and other companies.

The West accuses Russia of allowing fighters and arms to travel freely over its border into rebel-held territory in Ukraine’s predominantly Russian-speaking east.

Lavrov said Moscow had tried to contribute to efforts to end the fighting but the West has not sufficiently used its leverage over Ukrainian President Petro Poroshenko.

He repeated calls for an objective investigation into the shooting down of the Boeing 777, which Moscow has suggested was caused by Ukrainian government forces.

“Only the honest, open participation of all those who have access to information about the crash can be regarded as normal. Anything else we will consider as deceitful attempts to influence the investigation, putting presumption of innocence in doubt,” he said.

He suggested that Kiev had hampered access to the crash site on Sunday when international monitors abandoned plans to visit due to reports of heavy fighting.

International monitors said the fighting itself could affect the crash site, underlining the growing complexity of trying to establish who shot down the plane.

Lavrov also said Moscow was hopeful that monitors from the Organization for Security and Cooperation in Europe could be deployed along Russia’s border with Ukraine.

“We hope that this will dispel suspicions that are regularly being voiced against us, that those [border] checkpoints controlled by the militias from the Ukrainian side are used for massive troops and weaponry deployment from Russia to Ukraine,” he said.