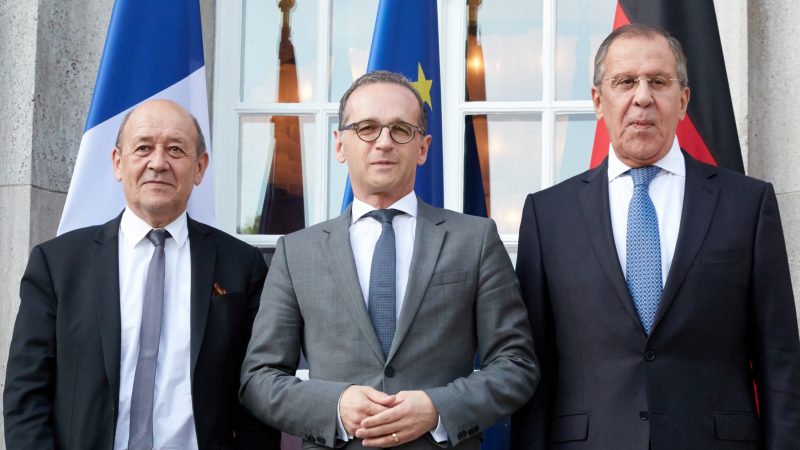 File photo. Ministers of Foreign Affairs of the Normandy format Pawlo Klimkin (Ukraine, not seen), Jean-Yves Le Drian (France), Heiko Maas (Germany) and Sergei Lavrov (Russia) pose for photographs during a meeting at Villa Borsig, Guesthouse of the Federal Minister, in Berlin, Germany, 11 June 2018. The Normandy format which is a diplomatic group of senior representatives of the four countries (Germany, Russia, Ukraine and France) to resolve the situation in the East of Ukraine is resumed after 16 months break. [EPA-EFE/HAYOUNG JEON]

The Russian foreign ministry published on Wednesday (17 November) a number of diplomatic letters it exchanged with Germany and France to try to show that its diplomatic stance on talks over east Ukraine has been misrepresented.

Ukraine and Russia have been foes since 2014, when Moscow seized Ukraine’s Crimea peninsula and backed a rebellion in the east. Major combat ended with a ceasefire agreed in the Belarus capital Minsk in 2015, but sporadic clashes still regularly kill civilians, Ukrainian soldiers and separatists.

Tensions between Russia and the West over Ukraine grew worse recently amid reports of Russia’s military build-up near the Ukrainian border. Russia dismissed such allegations, saying it poses no threat and can move its troops over its territory as it deems necessary.

On 9 November France’s foreign ministry said Russia had refused to accept a ministerial meeting with France, Ukraine and Germany to discuss the conflict in eastern Ukraine and denied that it had failed to respond to proposals made by Moscow.

In a rare response, Russia published 28 pages of diplomatic documents, showing it had said in advance that foreign minister Sergei Lavrov could not take part in the proposed 11 November meeting.

In the first letter, dated 29 October, Lavrov told his German and French counterparts that the continuation of meetings under the so-called Normandy format was possible.

Russia attached a draft statement on the “internal Ukrainian conflict” that Russia proposed to publish after the possible Normandy format meeting.

On 4 November French Foreign Minister Jean-Yves Le Drian and German Foreign Minister Heiko Maas said in a joint letter to Lavrov that Moscow’s draft had assessments that Germany and France did not share, such as the portrayal of an “internal Ukrainian conflict” among others.

The European diplomats said they were “looking forward to meeting in person on 11 November.”

Lavrov replied two days later, saying he was disappointed by their response to Russia’s proposal. Lavrov said he had informed Le Drian when they met in Rome on 30 October that he already had other working plans for 11 November.