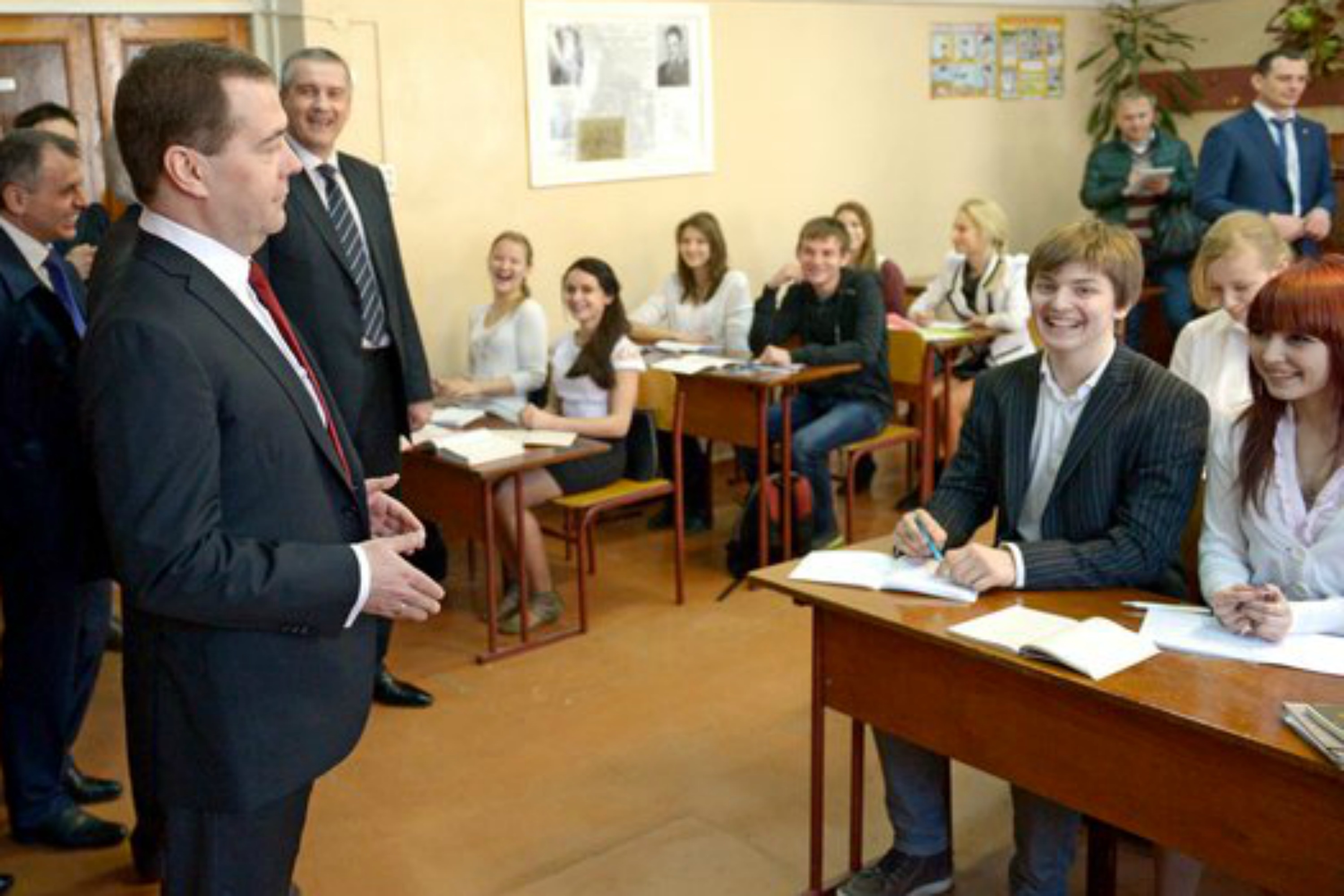 Prime Minister Dmitry Medvedev flaunted Russia’s grip on Crimea by flying to the region and holding a government meeting there yesterday (31 March), angering Ukraine and defying Western demands to hand the peninsula back to Kyiv.

But in a gesture that could ease tension in the worst East-West standoff since the Cold War, Russia pulled some troops back from near Ukraine’s eastern frontier – a move the United States said would be a positive sign if it is confirmed as a withdrawal.

But Medvedev’s visit taunted Western leaders by underlining their inability to force Putin to relinquish Crimea, seized after the overthrow of Russian-backed Ukrainian President Viktor Yanukovich and formally annexed on 21 March.

Accompanying Medvedev, outspoken Deputy Prime Minister Dmitry Rogozin, who has been targeted by Western sanctions, left no doubt about the symbolism of the trip, saying on Twitter: “Crimea is ours. Basta!”

The Ukrainian government denounced the visit as a “crude violation” of the rules of diplomacy, a few hours after the latest round of crisis talks between Russia and the United States ended inconclusively.

Western countries have expressed concern about a Russian troop buildup on the Ukraine border.

But the Russian Defence Ministry said a battalion from the central military district’s 15th motorised infantry brigade was pulling back to its home base of Samara, on the Volga River, after what it called ‘month-long exercises’.

In Washington, the White House reacted cautiously to the troop movements. “We’ve seen the reports, and if they are true and if – more importantly – they represent further withdrawals, that would be a positive sign,” said spokesman Jay Carney. “It is certainly something that we have explicitly called for.”

Putin and Merkel also discussed by phone ways of stabilising Ukraine and another former Soviet republic, Moldova. A Kremlin statement quoted Putin as calling for a comprehensive solution that would end what he called a “blockade” of Moldova’s breakaway region of Transnistria.

Diplomats said the ministers from the 28-member alliance would look at options ranging from stepped-up military exercises and sending more forces to Eastern member states, to the permanent basing of alliance forces there – a step Moscow would view as provocative.

Soon after Medvedev landed with Cabinet members in Crimea’s main city of Simferopol, he held a government meeting on moves to revive the region’s struggling economy, including creating a special economic zone to ease tax and customs duties.

“Our aim is to make the peninsula as attractive as possible to investors, so that it can generate sufficient income for its own development,” he said, in a meeting that included Crimean leaders and was broadcast live on Russian state television.

In comments that made clear Russia had no plans to relinquish the region, he set out moves to increase wages for 140,000 state workers in Crimea, boost pensions, turn the region into a tourism hub, protect energy links, end reliance on Ukraine for water and improve its roads, railways and airports.

Chants of “Russia!” and “Thank you!” from a Russian-flag-waving crowd greeted Medvedev on his visit to Sevastopol, home of Russia’s Black Sea Fleet. Some welcomed him with a hug and kiss.

“We will take care of Sevastopol. Everything will be fine,” he told the crowd on a visit to cement and celebrate Moscow’s acquisition of Crimea, which has an ethnic Russian majority and had been transferred from Russia to Ukraine by Soviet leader Nikita Khrushchev in 1954.

Underscoring Crimea’s reintegration into Russia, the Foreign Ministry issued a statement on Monday warning that foreigners would now require a Russian visa to travel to Crimea.

No agreement at talks

Ukraine sent a protest note to Moscow over Medvedev’s trip, declaring that an official visit to its territory without its consent “is a crude violation of the rules of the international community.”

Kerry said resolving the crisis over Ukraine depended on a pullback of what the United States has estimated to be 40,000 Russian troops, near Ukraine’s eastern border.

The United States and Russia’s top diplomats also continued talks by phone on Monday, officials said. A senior State Department official said Lavrov’s call was to inform Kerry of the pullback of one battalion from the border.

Russia has described the troop buildup as part of war games. Ukrainian Major-General Oleksandr Rozmaznin told journalists in Kyiv that the number of troops near the border had been reduced but that might just reflect a scheduled rotation of conscripts.

The United States and European Union have imposed sanctions on Russian officials since a 16 March referendum in which Crimea voted for union with Russia. The West says the vote was a sham as Russian forces had already taken control of the region.

Russia has shrugged off the sanctions, although the absorption of Crimea and its 2 million residents creates an additional financial burden, as Russia struggles with slow growth, rising inflation, a weak currency, and unusually high capital flight this year.

“We have underdeveloped infrastructure and poor people. Now all this has just come to an end and we will finally start dynamic development,” Rustam Temirgaliyev, Crimea’s first deputy prime minister, told Reuters.

Crimea has a large budget deficit, and relies on Ukraine for 85% of its electricity, 90% of its drinking water and much of its food.

Boosting the local economy and tourism faces big obstacles, not least a decision by the EU this month to impose heavy tariffs on goods from the annexed region.

Of the 6 million to 8 million tourists a year who visited Crimea before Moscow intervened, more than 60% were from Ukraine, and only a quarter from Russia.

Crimea’s Moscow-backed leaders declared a 96% vote in favour of quitting Ukraine and annexation by Russia, in a referendum held on 16 March Western powers said was illegal, and will bring immediate sanctions.

At their 20-21 March summit, EU leaders agreed to broaden the list of Ukrainians and Russians whose assets will be frozen and freedom of movement in the EU restricted, as a response to Russia’s annexation of the Crimean peninsula, bringing the number to 33. A so-called “third stage” of sanctions is now also in the pipeline.

Meanwhile, US President Obama announced that the Americans had added 20 new officials to its sanctions list, including Putin’s chief of staff, Sergei Ivanov.