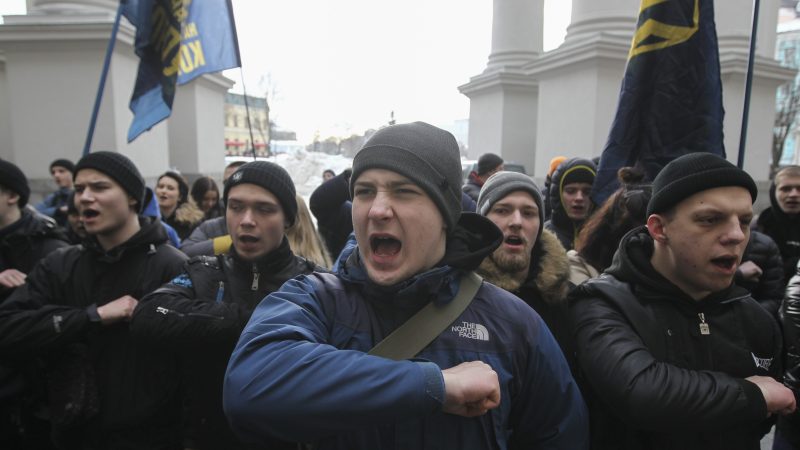 Supporters of different Ukrainian nationalist's parties shout slogans during their rally with slogan 'Kurils to Japan - Crimea to Ukraine' in front of the Ukrainian Foreign Ministry building in Kiev, Ukraine, 07 February 2019. [EPA-EFE/STEPAN FRANKO]

Ahead of the fifth anniversary of Moscow’s annexation of Crimea from Ukraine, condemned by the West but celebrated by most Russians, the United States, Canada and the EU slapped new sanctions on more than a dozen Russian officials and businesses.

Russia on Saturday (16 March) slammed the “hypocrisy” of new Western sanctions against its officials over their role in a naval confrontation with Ukraine last year, and vowed to respond to the “unfriendly” move.

“The pretext for including our countrymen in the illegitimate sanctions list of the EU astounds with hypocrisy and cynicism,” the Russian foreign ministry said.

"The pretext for including our compatriots in the illegitimate #EU #sanctions list is striking in hypocrisy and cynicism" – @mfa_russia comments on new restrictive measures against #Russia. Full text: https://t.co/EGTLVCkKTQ pic.twitter.com/QYQpLHmEHH

In a previous statement late on Friday, it said Russia “will not leave the unfriendly act of the EU without a response” and accused Brussels of siding with Kiev on the eve of its presidential election due on 31 March.

“It cannot be ignored that the decision came not long before the presidential election in Ukraine,” it said.

It also accused Washington and Ottawa of “Russophobia” and said the sanctions will “not lead to the results the US and Canada want”.

A US Treasury statement Friday said six Russian officials, six defence firms and two energy and construction firms had been targeted, either over the seizure of Ukrainian vessels in the Kerch Straight last November, or for their activities in Russian-annexed Crimea or separatist eastern Ukraine.

The US sanctions freeze all property and interests in property belonging to the designated individuals and entities, and prohibit US persons from transacting with them.

Four of the individuals are border guard or coast guard officials, singled out for their role in a November 25, 2018 naval confrontation, in which Russian ships fired on and seized three Ukrainian vessels in the narrow Kerch Strait the two countries share.

The four were targeted jointly with the EU and Canada according to the State Department.

Twenty-four Ukrainian crew members were detained in the naval incident.

In the statement on Saturday, Russia said its border guards were “bravely fulfilling their duty to defend the state borders of our country” and that the confrontation was the result of a “provocation” by the Ukrainian side.

It said Moscow was acting “within the norms of international law” in arresting the Ukrainians.

Russia has said the sailors will go on trial for violating its maritime borders. They face up to six years in prison for illegally crossing Russian borders, lawyers have said.

President Vladimir Putin will take part in celebrations in the Black Sea peninsula, where he is also due to launch a new power station, the Kremlin said.

Putin will visit Crimea today on the fifth anniversary of Russia's annexation of the Ukrainian Black Sea peninsula. https://t.co/pmyZE8BGaj

Moscow’s 2014 takeover of Crimea was denounced by Kiev and the West as an annexation and led to sanctions against Russia, but it resulted in a major boost of Putin’s popularity at the time.

In Russia, 18 March has been officially proclaimed as the “Day of Crimea’s Reunification with Russia”.

In Moscow, city authorities have thrown a street festival called “Crimean Spring” that hosts jazz concerts, cooking workshops and a photography exhibition a stone’s throw from the Kremlin.

Up to 10,000 people are expected to take part in a flash mob in the Moscow region Monday, dancing to the Soviet-era song “Waltz of Sevastopol” – the Crimean city home to Russia’s Black Sea fleet.

“For us, the question of Crimea is decided forever,” Russian foreign ministry spokeswoman Maria Zakharova said several days before the anniversary.

“This is because its reunification with Russia was the result of the free will of the peninsula’s people in a referendum,” she added.

The March 2014 referendum, held by Crimean authorities, was not recognised internationally.

“All these five years there has been an atmosphere of both open and hidden terror against the people of Crimea and international law,” Ukrainian Foreign Minister Pavlo Klimkin told AFP.

The Crimean Tatars, a Muslim-majority community that is largely opposed to the annexation, have faced pressure from Russian authorities.

Russia has banned the Mejlis, the Crimean Tatars’ elected assembly which resisted Russian rule, denouncing it as extremist.

Ukraine “feels pain for this every day” and that “the international community will never recognise” the annexation, he said.

But surveys show Russians are less enthusiastic about Crimea being under Moscow’s rule than they were five years ago.

According to a survey published by the Center for Public Opinion (FOM) in early March, only 39% of Russians believe the annexation brought Russia more good than harm, compared to 67% in 2014.