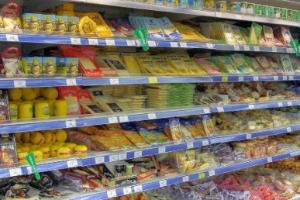 Russia suspended imports of dairy products from neighbouring Lithuania today (7 October), turning up trade pressure on the small Baltic country ahead next months's summit in Vilnius, where the bloc is expected to sign a key trade pact with Ukraine.

Russia's consumer protection agency Rospotrebnadzo cited quality concerns as the reason for the suspension, just weeks before Lithuania hosts a key summit in Vilnius to promote closer trade ties with Ukraine and other ex-Soviet states who are not members of the EU.

Russia's move further turns up the heat on Lithuania ahead of the summit, which Moscow sees as a threat to its influence in the region. Russia customs authorities recently blocked transport trucks at the border with Lithuania for up to 20 days at a time in recent weeks, causing heavy losses for its freight industry.

In recent weeks, Rospotrebnadzor has been acting more and more as a political arm of the Kremlin. But the European Commission has so far dealt with the tensions as routine trade or consumer protection disputes.

Frederic Vincent, spokesperson to EU Health Commissioner Tonio Borg, said that the EU executive had not been formally informed by the Russian federation about the nature of their safety concerns, but that Brussels had full confidence in Lithuania’s dairy products.

“The EU has the most stringent system in the world when it comes to food safety,” Vincent stressed.

Vincent declined to comment on suggestions that the dispute was in fact political rather than merely related to health or trade. Pressed by EURACTIV to comment, he replied that the Commission first had to take a close look at the situation.

He added that the Commission was "pushing" the two sides to negotiate.

Lithuania, which currently holds the EU's rotating presidency, is preparing to host a key summit on on 28-29 October with six countries of the so-called "Eastern partnership", the EU's rapprochement initiative with Ukraine, Moldova, Belarus, Georgia, Armenia and Azerbaijan.

Depending on its progress on a number of outstanding issues, Ukraine is expected to sign an EU association agreement at the summit, containing a Deep and Comprehensive Free Trade Agreement (DCFTA). Meanwhile, Moldova and Georgia are expected to initial similar documents at the meeting.

As the summit approaches, Russia has banned the imports of wine from Moldova and chocolate from Ukraine over safety concerns, in what appears to be a strategy to escalate pressure on countries wishing to build closer ties with the European Union (see background).

Russia also told Moldova that it had to choose between cheap gas and EU integration.

The European Parliament has recently adopted a resolution calling on the European Commission to consider Russia’s pressure on neighbours beyond just trade, saying it was “merely a cover for blatant political pressure”.

Asked about the series of decisions by Russia to tighten its trade regime towards Eastern partnership countries in advance of the Vilnius summit, Pia Ahrenkile Hansen, another Commission spokesperson, said no new declaration was to be made at this point in time.

The European Union must summon the Russian ambassador to the EU following the implementation of unilateral trade restrictions by Russia against Lithuania, EPP Group spokesman in the European Parliament’s International Trade Committee, Daniel Caspary MEP (CDU/Germany) and Laima Andrikiene MEP (Lithuania) demanded on 8 October. In addition, the European Commission must bring a complaint before the World Trade Organisation against Russia to end the unfair discrimination against Lithuanian lorries and the import stop for Lithuanian milk products, the two MEPs said.

Tabling an oral question to the European Commission during the European Parliament's plenary session, Caspary and Andrikiene stated:

"Russia has to end what are clearly politically-motivated measures to disrupt the Lithuanian economy. The European Commission must now call on the WTO to stop Russian discriminatory acts against Lithuania.

“If Russia does not end its discriminatory and politically-motived disruptions of Lithuanian exports, appropriate counter-measures by the European Union as a whole must be an option," they added.

"The European Union must not remain toothless in the face of aggressive Russian trade restrictions," Caspary and Andrikiene said.

Anton Podlutskyi, Vice-president of the Association of Journalistic Research in Ukraine, sent to EURACTIV the following comment:

“The beginning of Russia's trade pressure already directly on the EU countries, in particular Lithuania, due to the Eastern Partnership Summit shows lack of Kremlin's strategy in terms of relations not only with Ukraine, but also with the European Union on the whole.

“This won't lead to nothing but legal actions to the WTO, aggravation of relations with the European Parliament and other EU bodies, and also deterioration of Russian diplomatic positions in Europe on the whole. It becomes more and more difficult for the supporters of intensive development of relations with Russia inside the EU to give reasons for the need of maintaining close trade, economic and political connections with Moscow.

“Impairing Lithuania economically through the suspension of import of the Lithuanian dairy at the level of €2 million per day is a target blowdirected at the EU economy on the whole. Thus, this same blow doesn't bring Russia any additional advantages, apart from aggravation of relations.

“Russia shouldn't forget that such pressure also provokes the pronouncement of the corresponding decision of the EU inspection bodies against monopoly-like actions of "Gazprom" in Europe. The result of the check ending up in penalties to "Gazprom" in the form of 10% of its profit for the last year (over €10 billion) can become a record penalty for Russian companies in Europe. It's interesting how Russia will claim restoration of its energy positions in the EU after that?”

Russia appears to be getting nervous as 28-29 November Eastern partnership summit in Vilnius approaches, ratcheting up pressure on countries seeking closer ties with the European Union. The summit is expected to see the signature of a landmark association agreement between the EU and Ukraine, and the initialling of similar agreements with Moldova and Georgia.

These countries, along with Belarus, Azerbaijan and Armenia, are members of the EU’s Eastern partnership initiative.

Reportedly, Armenia has already agreed under Russian pressure to join the Customs Union.