Study: EU can cut gas imports and carbon emissions by half 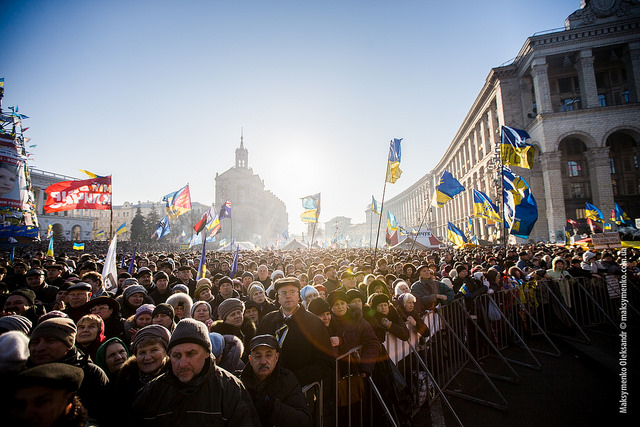 The European Union can slash natural gas imports from countries such as Russia by half and cut carbon dioxide emissions by 49% if it ramps up energy and efficiency improvements, a new report has argued.

Cost-effective measures in energy supply, industry and buildings would be good for the climate and boost energy security, the study by independent consultants Ecofys said.

The 49% cut to carbon, compared to 1990 levels, goes “far beyond” projections in the EU’s 2030 Climate and Energy Framework, the report said.

EU leaders will meet in Brussels later this week (23-24 October) to try and reach agreement on the package, which calls for a 40% greenhouse gas reduction, a 30% energy efficiency improvement and a 27% renewable energy target.

Energy security will also be on the agenda after the Ukraine crisis brutally exposed the EU’s dependence on Russian gas. Finland, Latvia, Lithuania, Estonia, Slovakia and Bulgaria are fully dependent on imports from Russia.

The EU’s response to the crisis was hampered by fears that Russia, through its state monopoly Gazprom, would up prices or simply turn off the taps.

The report said that an increase in the EU’s domestic gas production was unlikely, even when including shale gas as a possible source. Some EU countries, principally Poland, are investigating  the potential of shale gas.

But the report said factors such as production costs, environmental impact, size of reserves and inadequate technological development would prevent the EU from having substantial shale gas production before 2030.

The report, Increasing the EU’s Energy Independence: A No-Regrets Strategy for Energy Security and Climate Change, compared the potential of the measures to current EU projections.

A 58% reduction in gas consumption from buildings by 2030, equal to 23% of all natural gas presently consumed by the EU, could be made through insulation, improved heating systems and more renewable energy input, the report said.

A 20% reduction in gas consumption from industry, equal to 5% of all natural gas presently consumed, could be gained by increasing combined heat and power generation, more efficient heating and better electric drive systems.

Assuming realistic growth, gas consumption from power generation could be cut by 63%, equal to 19% of all natural gas presently consumed by EU, by ramping up the use of renewable energy sources.

While the proposed EU target for the share of renewables in the 2030 energy mix is 27%, Ecofys analysis said that was no greater than the amount expected under ‘business as usual” growth.That meant there was substantial room for more renewable energy development, the study said. 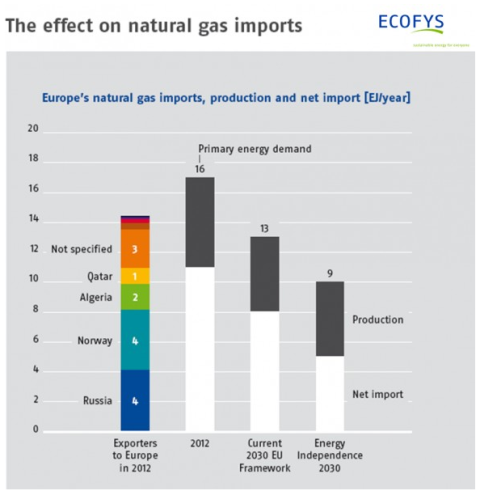 Europe’s natural gas dependency in 2012 and under future scenarios. [Ecofys]

Ecofys is part of the Open Climate Network, an organisation of independent research institutes and civil society groups. The World Resources Institute (WRI) is its secretariat.

Director of WRI’s climate and energy program Jennifer Morgan said, “This analysis shows that the EU can cut natural gas imports in half without raising costs for consumers.

“This is a win-win approach for the EU, increasing its energy security and raising the bar for climate action.”

Russia and Ukraine have agreed on the outlines of a contract to resolve their dispute over gas supplies, Ukrainian President Petro Poroshenko said on Friday (17 October) after meeting Russian President Vladimir Putin and the leaders of France and Germany.