President Petro Poroshenko hopes the appointment of the former parliamentary speaker will end months of political deadlock that has delayed billions of dollars in foreign loans needed to shore up Ukraine’s war-battered economy.

But the departure from the cabinet of experienced technocrats, including U.S.-born Finance Minister Natalie Ann Jaresko, who led strategic talks with Western lenders and investors has rattled pro-European reformists. Some deputies said the new government would struggle to get laws approved.

Speaking ahead of the vote, Groysman, 38, said his government was committed to tackling Ukraine’s endemic corruption and strengthening ties with the European Union.

“I understand the threats that face us. In particular I would like to highlight three threats – corruption, ineffective governance and populism, which do not pose less of a threat than the enemy in eastern Ukraine,” he said, referring to the conflict with pro-Russian separatists.

A new government should allow talks to resume on the disbursement of a third tranche of loans from the International Monetary Fund worth $1.7 billion, delayed since October.

Ukrainian bonds firmed after the vote in parliament.

Groysman’s rebooted cabinet appears to strengthen the influence of Poroshenko in the government and on the economic side of policymaking in particular. [See full list of cabinet here.]

Oleksandr Danylyuk, 40, who is set to become finance minister, is the deputy head of Poroshenko’s administration, while the economy minister and first deputy prime minister positions will be given to Stepan Kubiv, who is currently the president’s representative in parliament.

They replace Jaresko, praised by Washington for her handling of Ukraine’s debt crisis, and Aivaras Abromavicius, who as economy minister spearheaded a drive to privatise graft-ridden state firms, but quit in protest over corruption in February. 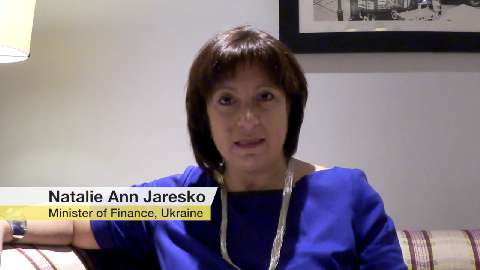 Jaresko: Ukraine needs all the help we can get

In an interview with EURACTIV’s Georgi Gotev, Natalie Ann Jaresko, the Ukrainian Finance Minister, talked about the cause of the current financial crises in Ukraine and the country’s need for continued assistance.

Poroshenko, whose confectionary business Roshen has made him Ukraine’s sixth richest man, said the new government must honour reform commitments made under its $17.5 billion International Monetary Fund bailout.

“I stress the imperative and inviolable necessity of continuing cooperation with the IMF and other international lenders,” he said.

His comments were echoed by EU foreign policy chief Federica Mogherini and European Commissioner Johannes Hahn, who in a joint statement said the formation of a new government was “a crucial development at a time when new momentum in the country is badly needed.”

Some lawmakers doubt the government will find that momentum, questioning whether it has sufficient votes to pass critical reforms or laws to underpin the fragile peace deal in eastern Ukraine, after former coalition partners joined the opposition.

“It means the government will only last for a few months at most, afterwards the president will be forced to dissolve parliament,” said Opposition Bloc lawmaker Serhiy Lyovochkin.

Ukraine’s Western allies fear that a snap election could boost populist parties who oppose IMF-led austerity measures to save an economy emerging from two years of recession.

Groysman replaces Arseny Yatseniuk, who was appointed after the “Maidan” street uprising that ousted Russia-backed president Viktor Yanukovich. His popularity declined into the low single digits, partly due to public perceptions that his government did too little to hold powerful oligarchs to account.

Yatsenyuk defies Poroshenko, says his replacement will do no good

Aides to Ukrainian President Petro Poroshenko spoke on Tuesday (1 March) of replacing the country’s premier in the next two weeks, while the incumbent, Arseniy Yatsenyuk said he didn’t believe a “reboot” of the government would work. EURACTIV.com reports from Kyiv.