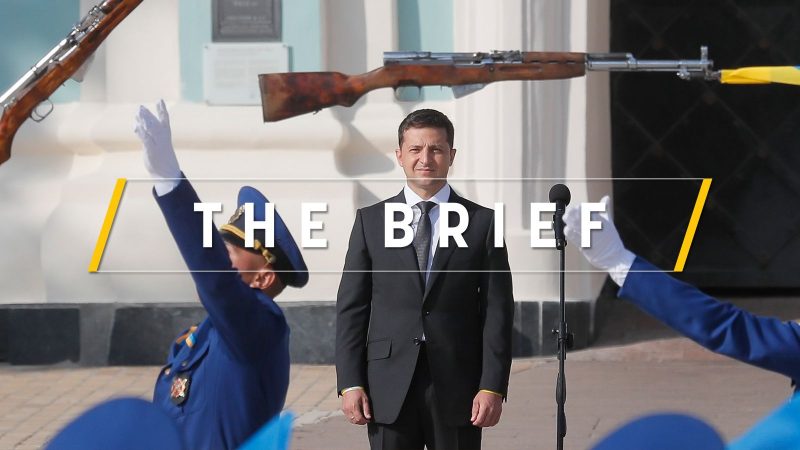 US President Donald Trump risks impeachment (again), this time because of a request he is said to have made to Ukraine’s leader Volodymyr Zelenskiy.

Reportedly, Trump pressured the Ukrainian president in a 25 July telephone call (five days after Zelenskiy took office) to investigate Joe Biden, the former US vice president, and his son Hunter, who had worked for a company drilling for gas in Ukraine.

As vice president, Biden is known for having put pressure on Ukraine to fire its top prosecutor, at a time when Biden junior was sitting on the board of a Ukrainian company. Trump has insinuated that Biden had tried to protect his son’s company from prosecution. Biden denies any wrongdoing.

An unnamed US intelligence official filed a whistleblower complaint about Trump’s actions, deemed “credible” by the inspector general of the intelligence community. The acting director of national intelligence, Joseph Maguire, however, refused to share the complaint with the Congress.

Maguire is due to testify before the Congress on Thursday (26 September).

Trump admitted he had discussed Biden and his son in the call, but denied putting any pressure on the Ukrainian leader. He is now posing as a victim of a “witch hunt”.

House Speaker Nancy Pelosi accused Trump of seeking Ukraine’s help to smear Biden ahead of the 2020 election. She described Trump’s behaviour as a “betrayal of his oath of office, betrayal of our national security and betrayal of the integrity of our elections”.

Asked about the telephone call, the Ukrainian president replied that nobody can put pressure on him except his six-year-old son. He said this on US territory, where he is attending the UN General Assembly.

A meeting with Trump is on his agenda and the US administration has apparently wanted to use it to warn against French President Macron’s overtures to Russia.

But the whole mess only favours Russia. Zelenskiy already said in New York that involving the US in the so-called Normandy format was not an option.

The Normandy format for the settlement of the conflict in Eastern Ukraine involves Russia, Ukraine, France and Germany.  The stakes from such a summit, due to be held in the next weeks, are huge.

It’s a bit of déjà vu. Trump was at the mercy of Russia before, now he’s in the hands of the Ukrainian president.

By the way, Ukraine has no interest in a US President like Trump, whose administration withdrew nearly $400 million in military aid approved for Kyiv by Congress. The way things are developing is not favourable for the EU. The United States of America, its biggest ally, is becoming too vulnerable.

Google, the American digital giant, does not want to pay its due when the EU copyright directive comes into force in France. The online platform prefers to modify Google News rather than pay online news publishers.

Croatia, the EU’s newest member state, will soon submit a request to the European Commission to extend a seven-year moratorium on the sale of agricultural land to foreigners, hoping to prevent foreign food producers from swooping in and buying swathes of land at low prices.

A new Cypriot MEP, Akel Niyazi Kizilyurek, has asked the European Commission if Turkish could be the bloc’s official 25th language – a prospect that does not seem very likely as it would require unanimous approval of all member states.

Transport and mobility policies look set to go into overdrive under Ursula von der Leyen’s European Commission, as a heady mix of climate change ambition and competition concerns dictate the direction of travel. This is what the vision looks like.

The message of the fourth Eurasian conference, held in Kazakhstan, was that this century should be defined by cooperation between Europe and Asia, but differences among participants prevented it from achieving concrete results.

Negotiators from the European Parliament and EU member states have agreed to appoint Romania’s Laura Codruţa Kövesi, the MEPs’ preferred candidate, as the first head of the newly-created EU Public Prosecutor’s Office.

For a rundown of everything that mattered on Day 3 of the UN Summit on climate action and sustainable development goals on New York, click here.

One response to “The Brief, powered by EDAA – Dangerous liaison”