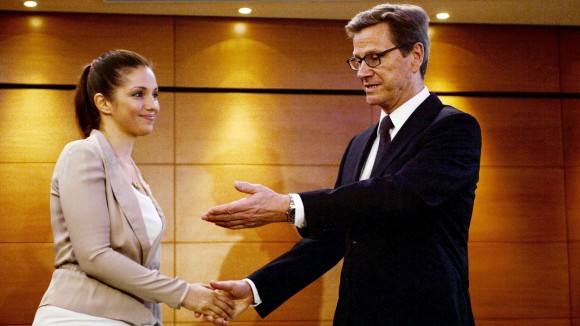 The minister, Guido Westerwelle, met Yanukovich in Kyiv for more than two hours for what he described as "constructive and intensive" talks.

Tymoshenko, a former prime minister who ran Yanukovich close in a presidential election in February 2010, is now serving a 7-year sentence for abuse of power.

But the EU says she is the victim of political maneuvering and would like her to be released before it signs landmark deals on association and free trade with the ex-Soviet republic in late November.

Westerwelle told journalists after his talks that he sensed "serious attempts and serious efforts" were under way to overcome the Tymoshenko issue.

He said he had put forward Germany's proposal to receive Tymoshenko, who has back trouble, for medical treatment in Berlin as a humanitarian solution to the problem.

"We are in complicated [negotiations] from both a political and judicial point of view," he said.

Yanukovich, the opposition says, fears Tymoshenko could make a comeback and challenge him in his bid for re-election in 2015, but at the same time wants to sign deals with the EU which will help pull Ukraine out of the orbit of Russia, its former imperial ruler.

He has said he is powerless to overrule the Kiev court which found her guilty of abuse of office linked to a gas deal with Russia that she brokered in 2009. The government says the deal saddled Ukraine with an exorbitant price for gas.

Ukrainian Foreign Minister Leonid Kozhara, standing alongside Westerwelle, said Tymoshenko's release had to be in accordance with the country's constitution and laws.

He said it also represented a political problem "since millions of people in this country sincerely believe that Mrs Tymoshenko carried out a crime which was confirmed by a Ukrainian court".

The Ukrainian Prime Minister Mykola Azarov explained to journalists in Kiev on 10 Octoberthat a deal in the case of Tymsohenko is almost imminent, Daniel Tost from EURACTIV Germany reported from Kyiv.

"We are extremely close to indeed resolving this matter,” Azarov said. “Neither the government nor the President has any intention of preventing the Association Agreement from being signed or of developing artificial hurdles."  "What we need now is the concerted move on the part of Mrs Tymoshenko in this matter", Azarov said, adding that this was now "being conducted". Azarov complained that despite the world recession and the difficult domestic situation in the Ukraine all he is asked is “about one person”. "The Ukraine and Mrs Tymoshenko are two different things. And they are incompatible." The leadership of the Ukraine is "very grateful" to Martin Schulz, President of the European Parliament, said Azarov. Due to his initiative the European Parliament monitoring mission in Ukraine led by Pat Cox and Aleksander Kwa?niewski was formed and given the green light. According the the Ukrainian Prime Minister, the greatest success of the mission is that people stopped looking at the case of Mrs Tymoshenko in black and white.

"They started to see the picture in a realistic light," he said.

The Foreign Affairs Committee of the European Parliament has adopted a report, which contains a provision stating that if Kyiv meets all the necessary conditions, the EU should sign the Association Agreement at the Eastern Partnership Summit in Vilnius in November and immediately begin its provisional application.

The Report, authored by Polish MEP Jacek Saryusz-Wolski (European People's Party) also expresses Parliament's intent to proceed with the full ratification of the EU-Ukraine Association Agreement within the present legislative term and recommends proceeding swiftly with the Association Agreements with Moldova and Georgia.

“The situation is not good but not hopeless either. The assessment of the situation in the Eastern Partnership countries as far as their integration with the EU is concerned depends to a high degree on the aspirations, choices and capacities of the six concerned countries. The Vilnius Summit will not be the end of the process, just the beginning. We need to look beyond Vilnius,” Saryusz-Wolski stated.

At the EU-Ukraine summit on 25 February, European Council President Herman Van Rompuy reiterated the three areas where the EU wants to see progress before signing an association agreement (AA) with Kyiv.

EU countries are divided on the Tymoshenko case. Some new EU members take the view that Ukraine should not be held back just because of the court case of one person. Diplomats from such countries have said in private that they personally believe Tymoshenko is “not an angel”.

But Germany and other older EU members see Tymoshenko as an icon of the Orange Revolution and say her release and the abandon of the charges against her is a condition sine qua non for signing the AA.