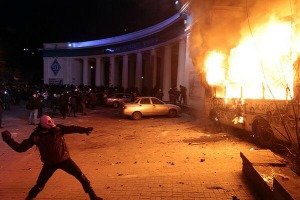 Protesters clashed with riot police in the Ukrainian capital yesterday (19 January) after tough anti-protest legislation, which the political opposition says paves the way for a police state, was rushed through parliament last week.

A group of young masked demonstrators attacked a cordon of police with sticks and tried to overturn a bus blocking their way to the parliament building after opposition politicians called on people to disregard the new legislation.

Despite appeals from opposition leaders not to resort to violence, and a personal intervention from boxer-turned-politician Vitaly Klitschko, protesters continued to throw smoke bombs and hurl fireworks and other objects at police.

The police appeared to show restraint during that fracas. The Interior Ministry said 30 police were hurt, including more than 10 admitted to hospital and four in serious condition.

A spokeswoman for Klitschko tweeted that President Viktor Yanukovich had agreed to meet Klitschko immediately at the presidential residence outside Kiev, although there was no confirmation from Yanukovich's side.

Klitschko later tweeted that the president had agreed to set up a committee on Monday to settle the political crisis.

As tensions continued into the night, police used water cannon against demonstrators gathered near the parliament building and the heavily protected government headquarters, eyewitnesses said.

Earlier, some distance away from the clashes, up to 100,000 Ukrainians massed on Kiev's Independence Square in defiance of the sweeping new laws, which ban rallies and which Washington and other Western capitals have denounced as undemocratic.

In Washington, the White House said it was "deeply concerned" about the violence on Sunday in Kiev and urged both sides to "de-escalate the situation."

"The increasing tension in Ukraine is a direct consequence of the government failing to acknowledge the legitimate grievances of its people," National Security Council spokeswoman Caitlin Hayden said in a statement. "Instead, it has moved to weaken the foundations of Ukraine's democracy by criminalizing peaceful protest and stripping civil society and political opponents of key democratic protections under the law."

Urging the Ukraine government to repeal the "anti-democratic legislation," withdraw riot police from downtown Kiev and begin a dialogue with the opposition, Hayden added, "The U.S. will continue to consider additional steps – including sanctions – in response to the use of violence."

The rally, the biggest of the new year, was the latest in a cycle of public protests in the former Soviet republic since Yanukovich made a policy U-turn in November away from the European Union towards Russia, Ukraine's former Soviet overlord.

Several big protests in December attracted hundreds of thousands of people, while thousands maintained a vigil in a Kiev square demanding Yanukovich resign. Since the new year demonstrations have become smaller, but hundreds of people are still camping in the square and 50,000 turned out a week ago.

The court ban on protests published on Wednesday, and last Thursday's legislation aimed at prohibiting all form of public protests, have inflamed tensions again.

The laws ban any unauthorised installation of tents, stages or use of loudspeakers in public.

Heavy jail sentences were imposed for participation in "mass disorder" and the wearing of face-masks or protective helmets. Dissemination of "extremist" or libellous information about the country's leaders was outlawed.

In a gesture of scorn for the helmet ban, many protesters on Sunday wore saucepans and colanders on their heads.

The crisis has highlighted a divide in the country of 46 million people between those, particularly in Russian-speaking eastern areas, who identify more closely with a shared past with Russia, and those, especially in the Ukrainian-speaking parts of western and central Ukraine, who look westwards.

Opposition leaders announced an action plan to gather people's signatures expressing no confidence in the leadership of Yanukovich and parliament.

Denouncing as unconstitutional last Thursday's hurried vote in parliament by Yanukovich loyalists, they called for moves to set up a parallel structure of power – including a people's assembly and a new constitution.

"Yanukovich and his henchmen want to steal our country. Ukraine is united as never before in its struggle against those in power today, in its determination not to allow a dictatorship," Klitschko, the strongest potential challenger for the presidency, told the crowds on Independence Square.

Opposition leaders were at pains to urge protesters not to resort to action that would provide a pretext for a crackdown.

When clashes broke out about 500 metres from Independence Square, Klitschko went to the scene and sought to persuade protesters to refrain from attacking police.

"Stop your actions," he called to groups of young people – some of them masked. "We are a peaceful protest." Protesters sprayed a powder fire extinguisher at police, catching Klitschko whose face was covered in white.

As police later appeared to be readying to take a tougher line against protesters, he tweeted: "Viktor Yanukovich, do not go down the same road as [late Romanian dictator Nicolae] Ceau?escu and [late Libyan leader Muammar] Gaddafi. Stop conducting war on the citizens of Ukraine."

Arseny Yatsenyuk, another opposition leader, told the crowds on Independence Square, "Our victory is not in using physical violence but in moral and spiritual strength."

Although setting up an alternative power structure may not be realistic, Sunday's turnout suggested it could also be difficult for the authorities to try to solve the crisis by use of force despite the court ban and the new laws.

Another opposition leader, far-right-nationalist Oleh Tyahnibok, dismissed the laws as unconstitutional as he spoke from the tribune on Kiev's main Independence Square.

"So we have a right not to carry them out and we will sabotage them," he said.

Yanukovich triggered the pro-Europe rallies when he did an about-turn last November and ditched a free trade deal with the European Union in favour of closer economic ties with Russia.

Russia has since thrown Ukraine a $15 billion (€11 billion) lifeline in credits as well as a softer deal for purchases of strategic supplies of natural gas.

"I am extremely concerned by the latest developments in the Ukraine. The freedom of speech and the freedom to protest are two fundamental rights that should be enjoyed by all citizens in democracies and respected by those who are elected as leaders".  "I call on President Yanukovich to respect the voices of his citizens. The opposition has called for further demonstrations to take place this Sunday and they have our support in this endeavour."

Following the news that Yanukovich failed to sign the AA at the Vilnius summit on 28-29 November, hundreds of thousands of Ukrainians took to the streets, demanding his resignation [read more]. The protests, called Euromaidan, have lasted ever since.