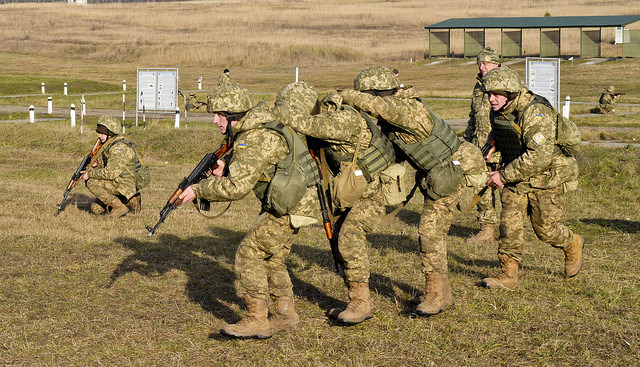 Clashes between pro-Russian rebels and government forces in eastern Ukraine have dwindled, but villages in the buffer zone around the frontline have been surreptitiously changing hands, raising fears that the tenuous ceasefire has unraveled.

Ukraine’s blue and yellow flag was hoisted in December in the sleepy village of Pavlopil, which for months had remained trapped in the “grey zone” between Kyiv-controlled and rebel territory.

This 30-kilometre-wide (19-mile-wide) demilitarised area, which straddles the Donetsk and Lugansk regions, was created as part of a peace deal signed in Minsk last February (see background).

International observers have deplored recent military activity in the zone by both Ukrainian troops and pro-Russian rebels, which they say undermines the prospects for peace in the region.

Weeks after seizing Pavlopil, Kyiv announced that rebels armed with heavy weapons had entered the grey-zone village of Kominternove, some 20 kilometres northeast of the strategic port city of Mariupol.

Separatist leaders denied they had entered the village, but observers from the Organization for Security and Cooperation in Europe (OSCE) reported having seen “multiple fresh caterpillar tracks, consistent with infantry fighting vehicles and tanks” there.

Locals told the OSCE that armed rebels had entered Kominternove on 22 December, leaving two days later before the arrival of international observers.

“What happened in Kominternove was a clear violation of the Minsk agreement”, said Alexander Hug, the OSCE’s deputy chief monitor in Ukraine.

“The ceasefire was broken by both sides; weapons were used with the intent to establish control over areas where previously there was no armed presence,” Hug added, also criticising Ukrainian troop “movements” in Pavlopil.

A high-ranking Ukrainian security official told AFP on condition of anonymity that the rebel presence in Kominternove was “retaliation” for the Ukrainian army’s operation in Pavlopil.

Both sides are trying to take control of villages – long neglected because of their limited strategic value – that fall under their respective jurisdictions according to the Minsk agreements, the official said.

The silent incursions into the buffer zone come amid a lull in a conflict that has left more than 9,000 people dead since April 2014.

The warring sides had reached a 1 September truce agreement that significantly calmed deadly exchanges of artillery and missile fire along the buffer zone separating rebel-run territory from the rest of Ukraine.

“In December, our forces gained control of seven villages,” the security official said, saying troops were trying to seize the areas that coincide with the demarcation line established in the peace accords.

The presence of Ukrainian troops and pro-Russian rebels in the buffer zone has worried locals, who view the militarisation of the area as a prelude to renewed hostilities.

“A contingent of peacekeepers should have been stationed in the buffer zone to avoid this”, said Sergiy Shapkin, the mayor of Pavlopil and of the neighbouring town of Pyschevyk, where Ukrainian troops are now present.

The absence of peacekeepers in the buffer zone could lead to “provocations”, Shapkin said as he unpacked wood briquettes supplied by the Red Cross.

“If shelling resumes, a single Grad missile will be enough to destroy all of Pyschevyk,” said Lyubov Belik, a pensioner waiting in line for wood.

“This doesn’t mean that we’re not grateful to the Ukrainian military for bringing us food,” she added. “We’re just fed up with the war.”