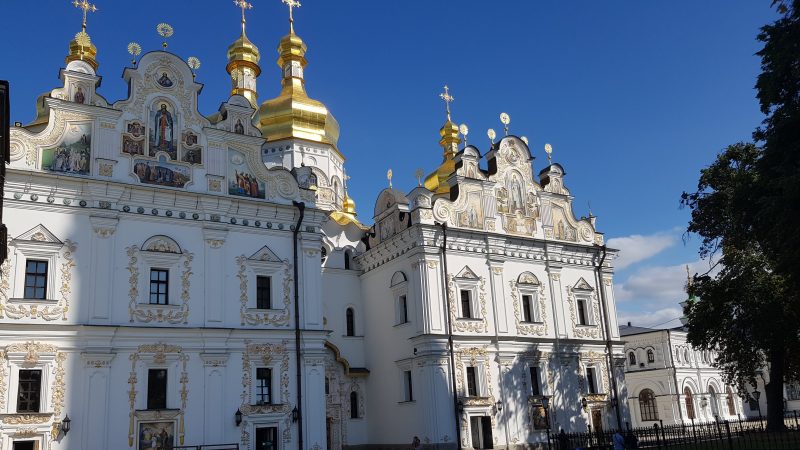 Pechersk in Kyiv is famous for its monuments and infamous with its court. [Georgi Gotev]

EU policymakers and civil servants cancelled their participation in an online conference dedicated to Ukraine when they learned the day before that a controversial high-ranking judge would sit on the Kyiv panel, EURACTIV has learned.

The conference ‘Dialogue about justice – 2’ held online on 2 September was a follow-up to meetings between the Kyiv-based think tank “Institute for Democracy and Development (PolitA)” – established by Ukrainian community leaders and experts to promote democratic development in the country – and EU policymakers and administrators.

Because of the COVID-19 restrictions, the conference took place in parallel sessions – linked via video – in Kyiv, and in the Brussels Press Club, plus – via Zoom – experts from Estonia, Israel and the United States.

Participants told EURACTIV that the conference was largely a flop, after EU representatives who had registered ultimately did not take part, having learned about the participation of judge Pavlo Vovk and some other panellists.

Vovk, the president of the Kyiv District Administrative Court (OASK), and his colleagues have been the subject of many media investigations related to their lifestyle, including expensive holidays, that appear to be beyond their official salaries.

Vovk was first appointed president of the District Administrative under pro-Russian President Viktor Yanukovych. During Euromaidan, OASK became notorious for a series of unlawful rulings against peaceful assembly.

Beside OASK, Pechersk is another court which has become the symbol of the judiciary in Ukraine becoming a fortress of arbitrary decisions and corruption. The court is presided by judge Serhii Vovk. Pechersk is a district of Kyiv where the capital’s most beautiful historic monuments are located.

Recently, the Pechersk court has been handling cases against veterans and volunteers from the anti-terrorism operations against separatists in Eastern Ukraine with the purpose of discrediting them.

The Pechersk court specializes in cases in favour of pro-Russian members of Yanukovych’s team, and pressuring the opposition, in particular the former president of Ukraine, Petro Poroshenko.

The boycott by EU officials was not the only highlight of the online conference held on 2 September, according to participants.

After half an hour of the meeting, a bomb alarm forced the Kyiv public to leave the space. A police investigation confirmed it was a false alarm and the speakers and the audience could return and continue the discussion with the Brussel panellists and the public.