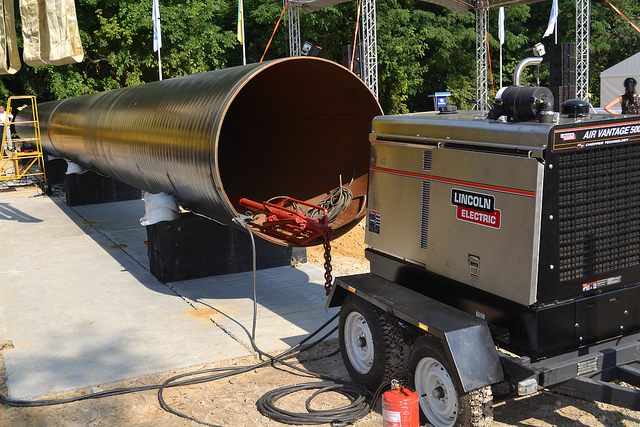 Brussels and Moscow have agreed to a tentative date and venue for a trilateral meeting with Kyiv to discuss the gas supplies to Ukraine and the EU, the Commission said Tuesday (29 April). President Vladimir Putin has warned that Russia could halt supplies to Ukraine over non-payment of more than $2 billion in debt for gas.

Energy Commissioner Günther Oettinger and Russian energy Minister Alexander Novak have discussed gas supplies to Ukraine and the EU, and the need for a trilateral meeting as soon as possible, the commissioner’s spokesperson Sabine Berger told EURACTIV.

A possible date for such a meeting could be 2 May in Warsaw, Oettinger and Novak agreed. Later Oettinger has reportedly also been in touch with the Ukrainian Energy Minister Yuriy Prodan who “principally agreed” to the date and place.

Prodan told EURACTIV on 8 April that the gas price hike from $268.50 per 1,000 cubic meters to $485.50 imposed by Moscow on Kyiv could cut gas supplies “at any moment” from Russia to the EU through Ukrainian territory [read more].

After former President Viktor Yanukovich refused to sign the EU-Ukraine Association Agreement, and opted to develop relations with Russia instead, Gazprom brought down the price of its natural gas for Ukraine by a third – to $268 dollars per tcm.

Ukrainian Prime Minister Arseny Yatsenyuk was quoted as saying yesterday that his country was ready to pay Russia’s Gazprom $268 per 1,000 cubic metres of gas and would quickly pay off its $2.2. billion debt.

Yatseniuk also said that Ukraine’s state gas company Naftogaz had started procedures to take Gazprom to an arbitration tribunal in Stockholm over inflated gas prices and that the Russian side had 30 days to respond to Kyiv’s proposals.

Commission President José Manuel Barroso answered a letter Putin had sent to several European leaders on 11 April, warning them to “work out concerted actions to stabilize Ukraine’s economy and to ensure delivery and transit of Russian natural gas in accordance with the terms and conditions set down in the contract”.

In his letter, Barroso calls on Russia to remain a “reliable supplier” of gas to Europe and agrees to host trilateral consultations to resolve issues regarding gas flows.

“The proposed consultations should help to avoid an extreme scenario and safeguard security of supply and transit while at the same time creating the necessary conditions for a structured cooperation including notably the modernisation of Ukraine’s gas transit system,” Barroso wrote.

Moscow has so far sought a bilateral Russia-Ukraine consortium, which would not only operate, but own the gas transportation system [GTS]. Ukraine’s position has been that there should be a trilateral EU-Ukraine-Russia consortium to operate GTS. The position of the EU has been that the Union cannot participate in a commercial project, that European companies should be involved instead, and that funding should be sought through an international financial institution.

In the meantime, Russia has raised the stakes and claims an additional $11.4 billion (€8.25 billion) gas bill, reportedly related to Naftogaz’s failure to meet a “take or pay” clause for gas supplies [read more].