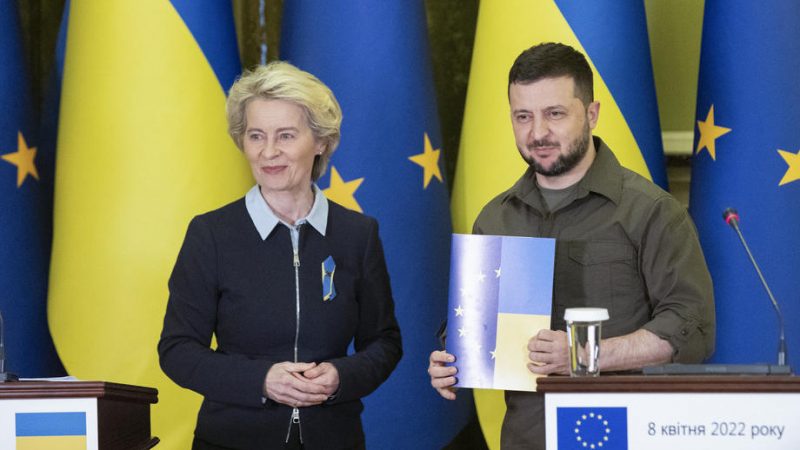 Ukraine has launched a charm offensive in recent weeks to convince the still sceptical Western European capitals to grant the country EU candidate status and avoid the pitfall of being lumped together with two other hopefuls, Moldova and Georgia.

The European Commission is expected to publish its opinion on Ukraine’s candidate status next Friday (17 June), which leaves EU leaders roughly a week to study the document before they are to decide on the matter at a crucial EU summit on 23-24 June.

The decision, which needs to be debated and adopted by the college of European Commissioners, is expected to be positive and ‘carefully worded’, according to EU officials familiar with the matter.

High-ranking Ukrainian officials have been touring Europe’s capitals in recent weeks in a concerted diplomatic push ahead of the meeting.

A day earlier on Wednesday (8 June), the Speaker of the Ukrainian Verkhovna Rada Ruslan Stefanchuk had lobbied EU lawmakers in Strasbourg to support Ukraine’s efforts.

“We made our application in March, EU leaders made a formal political commitment that Ukraine will become part of the EU, and now we need the legal step by granting us EU candidate status,” Olha Stefanishyna, Ukraine’s deputy prime minister responsible for European integration, told reporters in Brussels.

“It’s really important that the EU does not play the game of promises,” she warned.

Several EU leaders have floated alternative solutions, such as a commitment to give Ukraine candidate status at a later stage. Another proposal, from France, envisages admitting Ukraine into a broader and looser second-tier framework of neighbourhood countries without granting full membership.

“At least there is no consensus on saying ‘no’ to Ukraine – because no EU leader will be able to say that publicly. Instead, the discussion is about modalities,” Stefanishyna said.

“The other positive thing is that we have strong advocates for the positive decision from all over Europe, not only from the east or the north,” she said, listing Italy, Ireland and Greece, who could be a “hidden player” on Kyiv’s side.

Last month in Kyiv, Stefanishyna told EURACTIV there would be around six to seven countries that are sceptical about allowing Ukraine to proceed quickly.

Back then, she named Germany, Portugal, Spain, Austria, and Sweden as some of the member states where there would be a need for “discussion.”

A month later in Brussels, asked by EURACTIV whether the reservations have been resolved, she said that Austria’s changed approach, in particular, would be among the “positive results”.

While Germany and Benelux have softened their stance, particularly the Netherlands and Nordics like Finland and Denmark were likely, according to Stefanishyna, to await the European Commission’s opinion before making a decision.

“We still have a very unexpected sceptic country like Portugal, a country with the largest Ukrainian diaspora, whose opposition came as a surprise,” she said.

Meanwhile, many observers fear, in light of Hungary’s blockage of the EU’s sixth sanctions package against Russia last month, that Budapest might yet again disrupt summit talks, this time creating issues over Ukraine’s candidate status.

“Mr Orbán has already formally declared that they are not going to put any objections over our European aspirations and so far we do not have any information that they are pursuing anything like that undercover,” Stefanishyna said.

“But what could happen is that they change their mind in the middle of the [summit] night and the sceptical countries at the same time have a ‘bad cop’ to hide behind,” she said, adding that “we have a significant experience of Hungary blocking us in talks with NATO in the past”.

Georgia and Moldova, the other two countries in what has been dubbed Associated Trio, submitted their applications to join the bloc just after Ukraine, prompted by Russia’s invasion of the country.

Asked by EURACTIV whether she fears that the idea to tie Ukraine’s bid together with Georgia and Moldova could further complicate the accession process, Stefanishyna said that Kyiv would be “really worried” by such a possibility.

“Speaking to capitals as well as during discussions here in Brussels, it was the biggest concern, because we [three] have a very different situation beyond the war,” she said.

A similar package deal in the Western Balkans, treating North Macedonia and Albania as an “accession duo” has so far prevented Tirana from moving forward because of Bulgaria’s veto on Skopje.

However, many EU officials and diplomats have admitted in recent weeks they believe it would be difficult to lump the three eastern countries together since the common ground among them was not huge.

According to them, Ukraine is now in a far different situation due to the Russian invasion and could potentially be seen as a special case, while it is hard to imagine that Georgia and Moldova could suddenly deliver on reforms they have struggled to implement so far.

An additional obstacle for Moldova and Georgia is that both countries have Russian-backed breakaway regions within their territory.