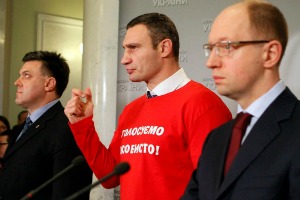 Ukraine's three main opposition leaders agree that the only way to achieve their goal of anchoring Ukraine to the EU is a common victory at the 2015 presidential election, but there are strong divides over election tactics.

Vitali Klitschko, leader of the opposition UDAR party, threw down the gauntlet when he said the opposition would only stand a chance of winning the elections if it presented a single candidate in the first round, to be held on 26 February 2015.

The three opposition forces had agreed to back the candidate who scores best in the first round. The other two opposition leaders are Arseniy Yatsenyuk, of the Batkivshchyna party of jailed former Prime Minister Yulia Tymoshenko and Oleh Tyahnybok, leader of the nationalist Svoboda party.

An opinion poll published last week by the local Democratic Initiatives Foundation showed that Yanukovich would lose in a runoff with Klitschko if presidential elections were held now. The poll also found Yanukovich losing to other opposition leaders including Yatsenyuk.

Klitschko, a former world heavyweight boxing champion, warned on Tuesday that those in power would be able to “stretch the vote” and arrange “a cruel surprise” for the opposition in the runoff if the three leaders were divided in the first round.

The UDAR leader said he had spoken to protesters at the Maidan central square in Kyiv, who had insisted that the opposition should have a single candidate from the beginning.

Yatsenyuk takes the view that at this stage, nothing had changed since May, and therefore the agreement should remain valid.

"It is important to realise what victory means. To win is not about becoming president, it’s about changing the country, and the president alone cannot do this," Yatsenyuk said.

The Batkivschchyna party leader said that the real victory would be that the three opposition parties in 2014 formed a single winning team for pro-European changes.

"This team does not just go to the polls, does not only win the polls, but it should prove to the world that Ukraine is able to make changes, and that after 2015 it will be an actual member of the European Union", Yatsenyuk said.

Alexander Brygynets, a journalist and MP from the Batkivschchyna party, said that he could understand the “emotional appeal” of a single candidate from the first round, but argued strongly against the idea.

According to Brygynets, a single candidate would be for those in power a much easier target to be discredited or even eliminated. According to him, nobody could guarantee that any of the three opposition leaders would be allowed to register as candidate for president.

Brygynets did not exclude that a potential single opposition candidate could become a victim of physical violence. In this context, he recalled the recent attacks on MP Andrey Ilienko and journalist Tetyana Chornovol.

"Today we cannot say exactly what the situation would be on the eve of the election – if the power will feel cornered, it would be ready to commit any kind of crimes to stop the elections", Brygynets said.