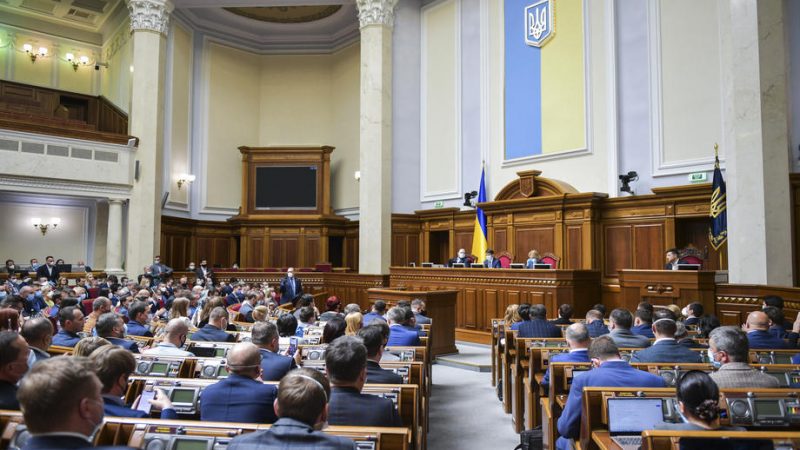 The Ukrainian parliament has passed a second reading on a banking regulation bill. According to the explanatory note to the bill, it provides for the inevitability of the process of withdrawing banks from the market, since the relevant decision of the National Bank (NBU) cannot be canceled or suspended by a court judgment. At the same time, the law clearly defines the prerequisites and procedure for former owners to receive compensation if they prove in court that the NBU move was illegal. [EPA-EFE/PRESIDENTIAL PRESS SERVICE]

Ukraine passed on Wednesday (13 May) a banking law that prevents the return of insolvent banks to previous owners, removing the last obstacle for getting aid from the EU and the International Monetary Fund, Interfax Ukraine reported.

The bill passed with 270 votes for, way above the required threshold of 226 votes.

The banking law was the last major hurdle towards securing a loan package from the International Monetary Fund (IMF), much needed to prop up Ukraine’s developing economy amid the coronavirus storm.

The IMF support, — which in the recent weeks has turned into a $5 billion stand-by arrangement lasting 1.5 years instead of a three-year $8 billion loan conditioned on structural reforms — is expected to open the way to more international aid, including financing from the World Bank and a €1.2 billion macro-financial assistance package from the EU.

The law has been welcomed by the European Commission’s neighbourhood and enlargement chief Olivér Várhelyi, who called it “an important measure for Ukraine and its people, also in the context of IMF and EU financial assistance.”

I warmly welcome the adoption of the draft law on #banking resolution by @ua_parliament @verkhovna_rada. Important measure for #Ukraine and its people, also in the context of #IMF and EU financial assistance. #EU will continue to support Ukraine on its reform path. https://t.co/KnUmJtGaoo

Oligarch Ihor Kolomoiskyi has been trying to regain control of the nation’s largest commercial lender PrivatBank, which was forcibly nationalised in 2016 due to what authorities said were fraudulent lending practices.

Resistance to what many have dubbed the “anti-Kolomoiskyi” bill remained high as MPs aligned with the oligarch submitted a record number of 16,000 proposed amendments in an effort to stall the vote.

The reform represents a major victory for Ukrainian President Volodymyr Zelenskiy, who has faced scrutiny for his business ties with Kolomoiskyi.

Ukraine’s economy has been hard-hit by the coronavirus pandemic, with the IMF projecting a 7.7% contraction of its economy this year.