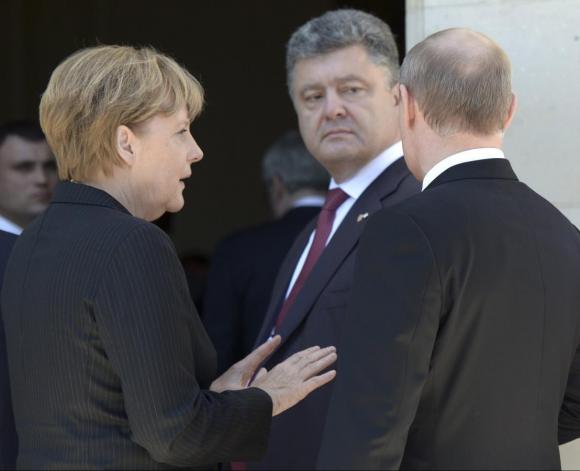 EU foreign ministers decided to delay putting more Ukrainian separatists and Russians on the sanctions list on Monday (9 February) in order to give a Franco-German peace plan time to work. Meanwhile in Washington, President Barack Obama has thrown his support behind EU diplomatic efforts.

The leaders of Ukraine, Russia, France and Germany will meet in Minsk, Belarus, on Wednesday, to try and broker a new ceasefire in eastern Ukraine.

To encourage the process while maintaining leverage, EU foreign ministers adopted asset freezes and visa bans on 19 Ukrainian separatists and Russians, and nine organizations, but said they would not take effect until 16 February.

“The principle of these sanctions remains, but the implementation will depend on results on the ground,” French Foreign Minister Laurent Fabius told reporters.

The addition of new names to the sanctions list could be annulled if things go well in Minsk.

EU foreign policy chief Federica Mogherini said the decision to delay enforcing the sanctions followed several meetings and phone calls she had had with Ukrainian President Petro Poroshenko in the last few days “to understand what kind of space is needed to allow the negotiations to have the maximum chances of success”.

The EU’s decision required a two-hour debate, with some ministers calling for immediate implementation of the sanctions and other arguing for a delay, EU diplomats said.

The list targets 14 separatists and five Russians, while only one Russian organization was among the nine targeted. The names were kept secret for now, but diplomatic sources said they included Russian Deputy Defence Minister Anatoly Antonov.

There was no discussion of lifting any other sanctions if Minsk goes well, diplomats said.

A peace deal would come as a relief to many EU countries that would rather avoid tightening sanctions on Russia, the EU’s largest energy supplier, and harming their own economies.

Germany Foreign Minister Frank-Walter Steinmeier told reporters he hoped the Minsk meeting would lead to “first steps … towards a ceasefire”.

Lithuanian Foreign Minister Linas Linkevicius voiced scepticism about chances of a peace deal leading to improvements on the ground, stating that it would be “a logical move” for the United States to send weapons to the Ukrainian army.

Many European leaders, including German Chancellor Angela Merkel, have cautioned against sending arms to Kiev for fear of fanning the conflict.