Riaboshapka’s dismissal came only a day after a sweeping government reshuffle ordered by Ukrainian President Volodymyr Zelenskiy, who fired most of his ministers, including the prime minister.

“My personal opinion is very simple: if there are no results – the person should not remain in their job,” President Zelenskiy said before the vote, according to news agency Interfax-Ukraine.

An actor and film producer by profession, Zelenskiy was elected by a landslide majority last year on the promise to tackle high-level corruption in Ukraine.

Riaboshapka’s reluctance to authorise a notice of suspicion in a case against former President Petro Poroshenko was cited as the last straw that led to his dismissal by David Arakhamia, who leads Zelesnkiy’s Servant of the People faction in the Ukrainian parliament.

Poroshenko is under investigation in several cases, including alleged counts of treason during the the so-called Minsk II negotiations in 2015 that sought to end the fighting in Ukraine’s breakaway eastern region of Dombass. 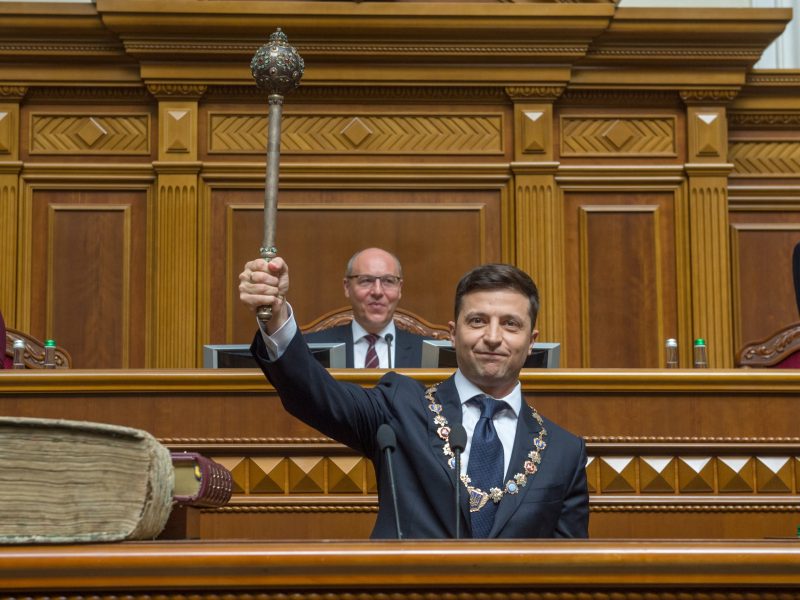 In a speech to the Parliament, Riaboshapka sought to defend his legacy as an independent prosecutor. “The Prosecutor General’s Office had been a tool of political repression for 28 years,” Riaboshapka told lawmakers before the vote.

“I was, and I am independent,” he insisted in an effort to distance himself from the country’s political leadership. “And an independent prosecutor can’t be forced, he can only be fired. So I’m leaving. But I’m leaving to return,” he added.

Riaboshapka enjoyed widespread support from Ukrainian civil society and anti-corruption organisations. NGOs insist that he is the first Prosecutor General to launch a large-scale ‘purge’ of the prosecutor’s office in the process of reform, wrote anti-graft NGOs in a joint statement on Monday (2 March).

“An attempt to dismiss him indicates a desire to immediately stop any changes to the system,” the NGOs claimed. “NGOs are convinced that it is a banal attempt to usurp the power over law enforcement and the prosecutor’s office,” said a letter signed by 18 organisations, including Transparency International Ukraine and Anti-Corruption Action Center.

The dismissal efforts “go hand in hand with strengthening the positions of the unreformed Ministry of Internal Affairs and the Security Service of Ukraine,” the NGOs added, also  expressing concern for the position held by another high-level official, Artem Sytnyk, who is the director of Ukraine’s National Anti-Corruption Bureau (NABU).

“The dismissal of the heads of the Prosecutor General’s Office and NABU will gain profit for [internal affairs] Minister Arsen Avakov and oligarch Ihor Kolomoiskyi,” the NGOs warned.

Zelenskiy has faced scrutiny for his business ties with Kolomoisky and repeatedly batted away suggestions that he would help the oligarch regain control of PrivatBank, which was forcibly nationalised in 2016 as part of a clean-up of the country’s banking system.

The EU Advisory Mission on law enforcement and rule of law reform said that it considered the progress under the leadership of Riaboshapka “one of the most comprehensive and meaningful reform efforts in the civilian security sector in years.”

#EUAM has been actively supporting the reform of the Office of the Prosecutor General and considers that the ongoing reform under the leadership of the current Prosecutor General is one of the most comprehensive and meaningful reform efforts 👉https://t.co/rSoeA3Uhhx

The possible dismissal of the NABU director “can undermine the credibility of the government to fight corruption,” wrote a group of seven MEPs in a letter addressed to President Zelenskiy.

“We would like to emphasise that the establishment and the guarantee of independence of NABU have been one of the key conditionalities” of the visa free regime, added the seven lawmakers, who hail from all four major political groups in the European Parliament.

“Any derogations from the procedures that guarantee NABU’s independence, attempts to threaten its autonomy and to prevent efficient work, will break commitments undertaken by Ukraine,” the MEPs warned.

🇪🇺💚🇺🇦
📧letter from MEPs 2 @ZelenskyyUa
In the face of the recent #Ukraine reshuffles it is crucial 2 stay alert & push 4 uncompromised anti-corruption reforms. This is the only way to curb the unchecked influence of oligarchs & not waste the trust of Ukrainians.@AndriusKubilius pic.twitter.com/naR6Yu9QzS

Zelenskiy sought to assuage his international partners by emphasising the “invariance of the chosen course” in his meeting with G7 ambassadors and the head of the EU delegation on Thursday (5 March).

The “government’s reboot was aimed at improving the performance of the executive branch and would not affect the announced priorities in domestic and foreign policy,” assured Zelenskiy.