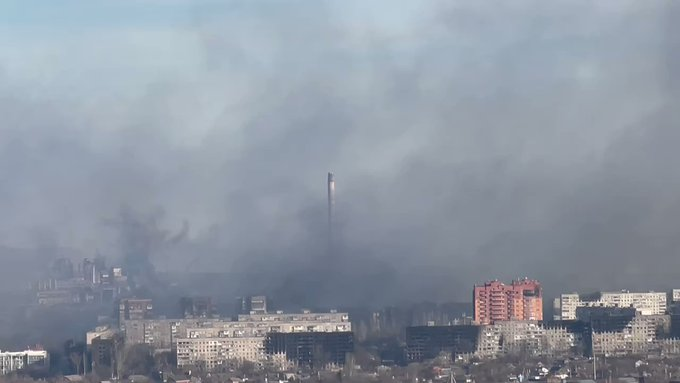 A general view of Mariupol, where residents are besieged with little food, water and power in a humanitarian crisis that is increasing pressure on European leaders to toughen sanctions on Moscow. [Twitter]

Ukraine on Monday (21 March) rejected Russian calls to surrender the port city of Mariupol, where residents are besieged with little food, water and power in a humanitarian crisis that is increasing pressure on European leaders to toughen sanctions on Moscow.

Ukraine’s government defiantly rejected Russian calls for Ukrainian forces in Mariupol to lay down their arms in exchange for safe passage out of the city and humanitarian corridors to be opened from 1000 Moscow time (0700 GMT) on Monday.

“Lay down your arms,” Colonel-General Mikhail Mizintsev, the director of the Russian National Center for Defense Management, said in a briefing distributed by the defence ministry.

“A terrible humanitarian catastrophe has developed,” Mizintsev said. “All who lay down their arms are guaranteed safe passage out of Mariupol.”

Mariupol has suffered some of the heaviest bombardment since Russia invaded Ukraine on 24 February. Many of its 400,000 residents remain trapped in the city with little if any food, water and power.

Even by the devastating standards of Russia's war in Ukraine, what's going on in Mariupol right now is pure horror.@GuyChazan spoke to survivors – and his story is free to read https://t.co/NNsbJhNE7w

Mizintsev said humanitarian corridors for civilians would be opened eastwards and westwards out of Mariupol at 10 a.m. Moscow time (0700 GMT) on Monday.

Ukraine has until 5 a.m. Moscow time to respond to the offer on humanitarian corridors and laying down arms, he said.

“There can be no question of any surrender, laying down of arms,” the Ukrainska Pravda news portal cited Ukraine’s Deputy Prime Minister Iryna Vereshchuk as saying.

“We have already informed the Russian side about this.”

Vereshchuk said over 7,000 people were evacuated from Ukrainian cities through humanitarian corridors on Sunday, more than half from Mariupol. She said the government planned to send nearly 50 buses there on Monday for further evacuations.

Russia and Ukraine have made agreements throughout the war on humanitarian corridors to evacuate civilians, but have accused each other of frequent violations of those.

The crisis in Mariupol and other devastated Ukrainian cities is likely to feature heavily in discussions between European Union leaders this week as they consider imposing tougher sanctions on Russia including an oil embargo.

EU governments will take up the discussion among foreign ministers on Monday, before US President Joe Biden arrives in Brussels on Thursday for summits with NATO’s 30 allies, as well as the EU and in a Group of Seven (G7) format including Japan. 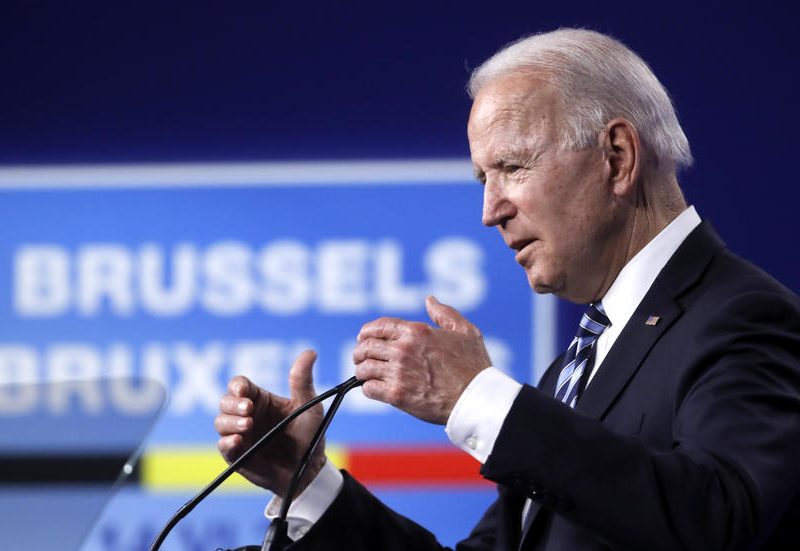 Biden to attend Brussels NATO and EU summits on 24 March

US President Joe Biden will make his first visit to Europe since the invasion of Ukraine to discuss the crisis with NATO allies next week, the White House said as the refugee tally hit 3 million amid Russian air strikes.

Diplomats said that Baltic countries including Lithuania are pushing for an oil embargo as the next logical step, while Germany is warning against acting too quickly because of already high energy prices in Europe. 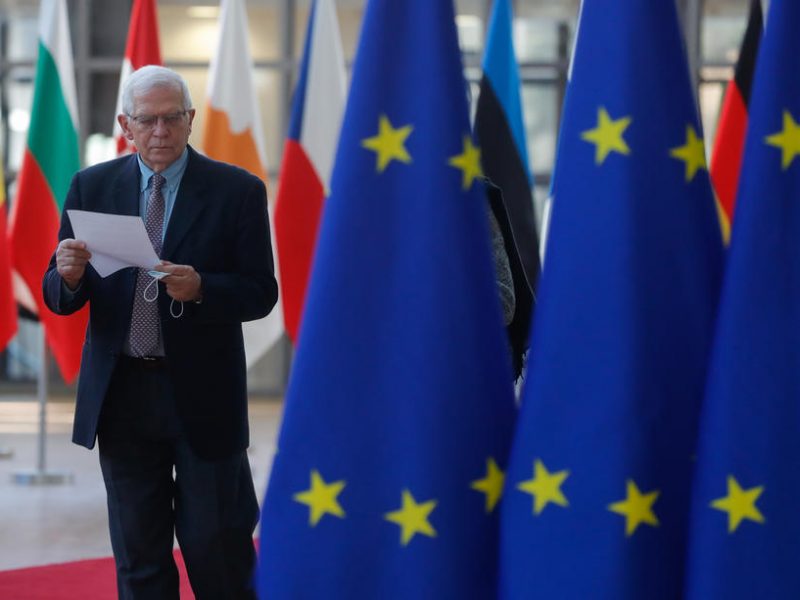 Energy on the table as EU foreign ministers meet on Ukraine, defence

As EU foreign and defence ministers meet in Brussels on Monday (21 March), the question is how far the bloc is prepared to go should the war in Ukraine escalate further.

In his latest appeal for help from abroad, Ukrainian President Volodymyr Zelenskyy addressed the Israeli parliament by video link on Sunday and questioned Israel’s reluctance to sell its Iron Dome missile defence system to Ukraine.

“Everybody knows that your missile defence systems are the best … and that you can definitely help our people, save the lives of Ukrainians, of Ukrainian Jews,” said Zelenskyy, who is of Jewish heritage.

He said in his daily video address to Ukrainians that “sooner or later we will begin to have talks with Russia, possibly in Jerusalem”.

Mariupol’s council said on Telegram that several thousand residents had been “deported” to Russia over the past week. Russian news agencies said buses had carried hundreds of refugees from Mariupol to Russia in recent days.

US ambassador to the United Nations Linda Thomas-Greenfield told CNN the deportation accounts were “disturbing” and “unconscionable” if true, but said Washington had not yet confirmed them.

Greece’s consul general in Mariupol, the last EU diplomat to evacuate the city, said it was joining the ranks of places known for having been destroyed in wars.

#Greek Consul General in #Mariupol Manolis Androulakis said that the #Russian army is purposefully destroying the city and its population. He compared Mariupol to cities that were destroyed by the #Nazis (#Guernica, #Leningrad, #Coventry) and the #Russians (#Grozny, #Aleppo). pic.twitter.com/wKVpPVv6dz

Kyiv and Moscow reported some progress last week toward a political formula that would guarantee Ukraine’s security, while keeping it outside NATO – a key Russian demand – though each side accused the other of dragging things out. 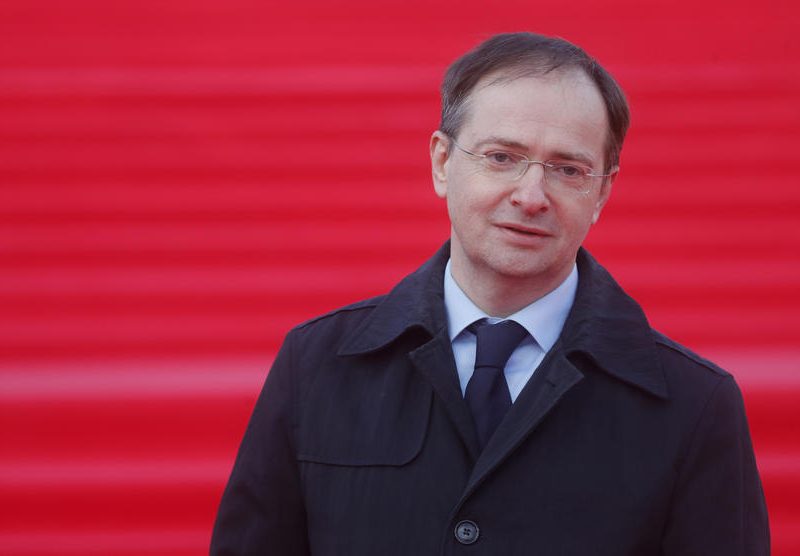 Ukraine and Russia make progress on plan to end war

A fifteen-point draft deal between Russia and Ukraine, reported by the Financial Times on Wednesday (16 March), would involve Kyiv renouncing NATO membership ambitions and accepting territorial changes, in return for security guarantees.

Capturing Mariupol would help Russian forces secure a land corridor to the Crimea peninsula that Moscow annexed from Ukraine in 2014.

Thread on the current status of the war. There are 4 areas/cities to watch over the next 1-2 weeks:
-Mikolaiv
-Mariupol
-Joint Forces Operation area
-Kyiv
Russian forces are having some successes pushing against JFO but less against Kyiv and Mikolaiv.
(map from @TheStudyofWar) pic.twitter.com/WPCD0Tls3S

Ukraine and its Western backers say Russian ground forces have made few advances in the last week, concentrating instead on artillery and missile strikes.

Zelenskyy’s adviser Oleksiy Arestovych said on Sunday there had been a relative lull over the past 24 hours, with “practically no rocket strikes on cities”. He said front lines were “practically frozen”.

In the capital Kyiv, Mayor Vitali Klitschko reported several explosions in Podil district and said rescue teams were putting out a large fire at the shopping centre. He said at least one person was killed.

Reuters was not able to verify the reports.

The UN human rights office said at least 902 civilians had been killed as of Saturday, though the real toll was probably much higher.

A five km area around a chemicals plant in the besieged northeastern city of Sumy the plant was hazardous due to an ammonia leak, Sumy regional Governor Dmytro Zhyvytskyy said. It was not known what caused the leak.

About 10 million Ukrainians had been displaced, including some 3.4 million who have fled to neighbouring countries such as Poland, the UN refugee agency said.

In the southern city of Kherson, video seen by Reuters showed dozens of protesters, some wrapped in Ukraine’s blue-and-yellow flag, chanting “Go home” in Russian at two military vehicles with Russian markings. The vehicles turned and left.

“I want the war to be over, I want them (Russian forces) to leave Ukraine in peace,” said Margarita Morozova, 87, who survived Nazi Germany’s siege of Leningrad in World War Two and has lived in Kharkiv, eastern Ukraine, for the past 60 years.