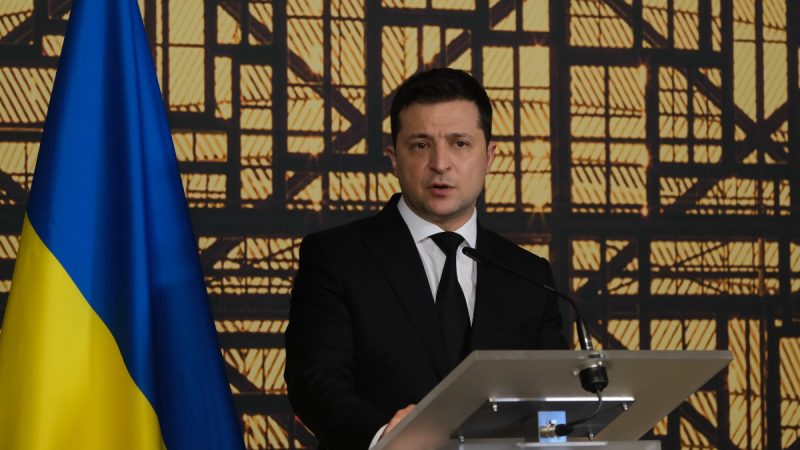 Ukrainian President Volodymyr Zelenskiy on Monday (28 February) submitted an official request to allow his country to gain ‘immediate’ membership under a special fast-track procedure as it defends itself from a Russian invasion.

“We ask the European Union for Ukraine’s immediate accession via a new special procedure,” Zelenskiy said, speaking on his Telegram channel as fighting with Russian troops continued across the country.

“Europeans are witnessing how our soldiers are fighting not only for our country, but for all of Europe, for peace, for peace for all, for all the countries of the European Union, Zelenskiy said in a video speech.

“Ukrainians have shown to the world who we are, while Russia has showed what it has turned into…Every crime, every shelling by the occupier only unites us more,” he said.

“Our goal is to be together with all Europeans and, most importantly, to be on an equal footing. I’m sure that’s fair. I am sure we deserve it,” he said.

“Application is registered. Process has been started,” Chentsov said.

Handed over 🇺🇦 application for the EU membership signed by President @ZelenskyyUa to 🇫🇷 PermRep to the EU Philippe Léglise-Costa, current Presidency of the Council of the EU @Europe2022FR.
Application is registered. Process has been started. #UkraineIsEU #EUisUkraine 🇺🇦🇪🇺 pic.twitter.com/BBcx7UI6ST

The move for immediate membership was a step up from his call at the weekend for a swift decision on his country’s EU aspirations.

It comes after several signals from the EU side indicated a change in attitude to potentially consider such a request.

Unlike the Western Balkan countries which have been given a clear perspective to join the EU, the former Soviet republics of Ukraine, Moldova and Georgia, who also aspire to EU membership, have received no such pledge.

In what some have rated as the EU executive’s clearest commitments so far, European Commission chief Ursula von der Leyen stressed on Sunday (28 February) Ukraine belongs in the  EU, and the bloc wants the country to join.

“They are one of us, and we want them in,” von der Leyen had told Euronews in an interview on Sunday (27 February), after emphasising the already existent level of EU-Ukraine cooperation.

With Kyiv’s growing ties to the West, a thorn in the side of Moscow, those remarks are likely to anger Putin, who has claimed a historical oneness between the Russian and Ukrainian peoples as one of his justifications for his unprovoked invasion of Ukraine.

Last week, Slovenia and Poland called on EU member states to take “quick and courageous decisions”, speaking out in favour of Ukraine joining the EU by 2030.

Similar comments have been made by several Eastern European leaders.

They urged EU members to “enable EU institutions to take steps towards an immediate granting of the status of an EU candidate country to Ukraine, and to start the process of accession talks”.

In an interview with EURACTIV, Slovenia’s Prime Minister Janez Janša had called the current criteria outdated given the circumstances.

“This has to be a strategic political answer of the EU to the current challenges. What was not possible one week ago is possible now,” Janša said.

“Those discussions about enlargement in the past decade were very out date: ‘They are not fulfilling the conditions’, ‘they’re not controlling their own territory’ and so on – this was the Russian narrative, this is why Russia started these frozen conflicts,” he added.

Disagreements in  the bloc

Despite the growing momentum among a significant number of member states, EU officials seem split over the speed of the country’s EU prospects.

Earlier last week, European Council President Charles Michel admitted there were “different opinions and sensitivities within the EU on enlargement.”

Aspirants wanting to join the EU typically face a long and complex process that often requires major reforms to reach the bloc’s standards.

This also includes providing proof that their finances are heading in a direction that will allow them to adopt the euro.

Despite the Western Balkans having been brought back to the EU’s agenda, brokered by the Slovenian EU presidency last year, enlargement of the bloc remains on life support after years of disagreement.

In 2019, the enlargement of the bloc had become one of the most contentious issues among EU members when France insisted on an overhaul of the process for taking in new members, blocking the opening of talks with North Macedonia and Albania.

However, as EURACTIV understands, Paris would potentially be swayed towards ‘silent consent’, given the changed geopolitical situation.

This would leave Germany, who appeared to tone down expectations of Kyiv’s imminent bid earlier on Monday (28 February).

“Ukraine is part of this European house, and we know that the desire of many Ukrainians is and was to have closer ties with the EU,” German Foreign Minister Annalena Baerbock said in Berlin, speaking alongside her Slovenian counterpart, Anže Logar.

She, however, added that while “everyone is aware (…) that joining the EU is not something that can be done in a few months, but that it involves an intensive and far-reaching transformation process.”

There are currently five countries that are candidates to join – Turkey, Serbia, North Macedonia, Montenegro and Albania – but their bids have been stuck in limbo for years.

The EU gave Albania and North Macedonia the green light for membership talks in 2020, but the negotiations have yet to begin as they are blocked by Bulgaria over its disagreements with North Macedonia over historical interpretation.

The last country to join the EU was Croatia, which was admitted in 2013, after nearly a decade of negotiations and reforms.

The courageous resistance of Ukrainians to the Russian aggressor has certainly helped promote the idea of EU membership of this country. But the reluctance of Serbia to back sanctions against Russia is, to the contrary, impacting negatively to the idea of opening up to new members.

Serbia against Russia sanctions, but will accept refugees and send aid

Serbia believes it is wrong to violate the territorial integrity of any country, including Ukraine, Foreign Minister Nikola Selaković said on Saturday. The day before, President Aleksandar Vučić said Serbia refused to introduce sanctions against Russia because it invaded its …