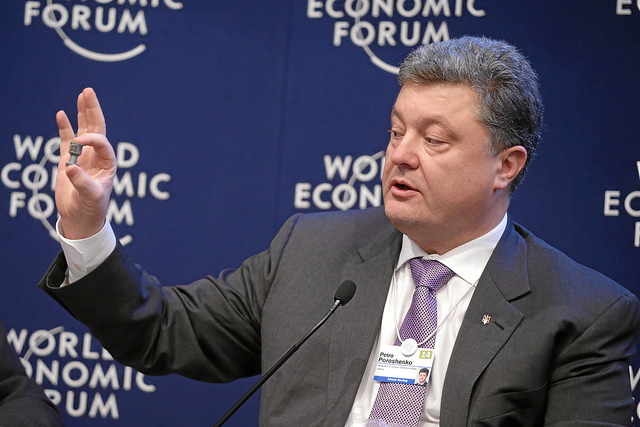 Ukrainians are preparing to vote on Sunday (25 May) to elect a new president in an atmosphere of tension with Russia, as pro-Moscow militias try to scupper the poll in the country’s east. The obvious frontrunner is Petro Poroshenko, a pro-European businessman known as “the chocolate king.”

Even Russian media admit that Poroshenko, a former minister of foreign affairs and former speaker of the Ukrainian Parliament, may win the election in the first round.

A poll by the Kyiv International Institute of Sociology, conducted between 29 April and 11 May, found Poroshenko was supported by 34% of voters, compared with 6% for former Prime Minister Yulia Tymoshenko and 4% for Serghiy Tihipko, a member of parliament and former economy minister close to the former President Viktor Yanukovich. 25% said they were undecided.

Among voters who has made up their minds, Poroshenko was supported by 54.7% – enough to avoid a runoff – with 9.6% for Tymoshenko and 6.7% for Tihipko. A total of 18 candidates are registered.

Poroschenko’s chances were further boosted when former boxer Vitaly Klitschko, leader of the political party Udar, decided to run for mayor of Kyiv instead. His other pro-European rival, Tymoshenko has refused to withdraw from the presidential race, even though such a gesture could guarantee that Poroshenko gets elected on the first round.

The 48-year-old businessman and politician is often cited as one of the most influential men in Ukrainian politics. He graduated with a degree in economics from Kyiv University in 1989, and started his own business selling cocoa beans. In the 1990s, he took control of several businesses before uniting them in the Roshen group, the largest confectionery enterprise in Ukraine.

Poroshenko has visited Brussels and publicly expressed support for bringing Ukraine in line with EU standards, even during the times when the rule of Viktor Yanukovich appeared undisputed and Tymoshenko was serving a jail sentence [read more].

Significantly, Poroshenko’s businesses in Russia has been targeted, as Moscow applied pressure to counter Ukraine’s drive towards the West [read more]. But in spite of his difficult relations with Moscow, analysts see Poroshenko as a pragmatic leader capable of mending ties with Russia.

The question remains to what extent Ukrainians will be able to vote in Eastern Ukraine and whether Russia will recognise the legitimacy of the elections.

In an apparent gesture to the West, Russian President Vladimir Putin ordered military forces to return to their permanent bases after drills in three regions bordering Ukraine, the Kremlin said yesterday (19 May). A NATO military officer said the alliance had seen no sign of the Russian troops returning to their bases. Putin had made a similar statement on 7 May, with little effect on the ground.

In another conciliatory sign, Putin welcomed what the Kremlin said were initial contacts between the Ukrainian government and “supporters of federalisation” who want more power for largely Russian-speaking regions in eastern Ukraine. Russia wants Kyiv to speak directly to the separatists.

Following the election of a new president, Ukraine will have to prepare for constitutional reform, curtailing some powers of the head of state and giving more autonomy to the regions. A recent visit by the current Prime Minister Arseny Yatsenyuk revealed however that Kyiv opposes ‘federalisation’ – an idea pushed by Russia and the separatists – which they fear would lead to too-great autonomy and weaken the grip of the central government [read more].

According to a recent paper by the National Democratic Institute for International Affairs, an organisation created by the United States government, conditions are favourable for holding democratic elections in most of Ukraine, except for the Donetsk and Luhansk regions. They last week held referendums on self-rule, which were not recognised by the West [read more]. Elections will not be held in Crimea, which was illegally annexed by Russia last March [read more].

According to Ukraine’s election law, no minimum voter turnout is required. The outcome is based on all polling station results that are considered valid. Invalidated precinct protocols are not taken into account. The exclusion from the presidential election of voters from Crimea or other regions would not in itself raise questions about the legitimacy of the process, the US institute writes.

But the elections could be scuppered by a wrong move by the Kyiv authorities themselves.

Reportedly, acting Ukrainian President Oleksandr Turchynov has asked the Justice Ministry to evaluate evidence of illegal activities by the Ukrainian Communist Party and to consider banning it.

According to the presidential website, the country’s security service has documented the party’s role in the separatist movements in the east and determined that several party members have acted “to the detriment” of Ukraine’s interests.

But Ukraine observers are wondering whether this is the right moment to raise this question.