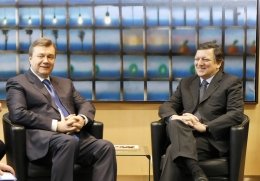 Ukrainian President Viktor Yanukovich plans to take his modern and dynamic country much further down the path to becoming a "proud member of the European Union," he revealed in an editorial for the Wall Street Journal.

Ukraine today is very different from when it declared independence from the Soviet Union 20 years ago. Back then the country faced an uphill struggle. After all, the nascent country was struggling with weak levels of GDP and mass unemployment seemed inevitable, the president reports.

But Ukraine today is "a modern and dynamic country in which small-business ownership is on the rise, creativity is thriving, and the market is picking up after a difficult recession. In the last year alone, foreign direct investment increased by 35%," he argued.

Yanukovich sees vast potential for Ukraine to play a prosperous role in the European economy.

"Not only does my country boast an educated labour force and a rich foundation in science and technology, but we also serve as a bridge connecting European, Russian and Asian markets. With a territory larger than France, one that is home to a third of the world's most fertile soil, Ukraine has often been referred to as the "breadbasket of Europe," he added.

The president argues that people in Ukraine value innovation. "Our current exploration of shale and offshore reserves will diversify energy supplies and help avert future crises. Our strong economic ties with the EU will only increase after we finalise an Association Agreement later this year — a springboard to future EU membership," he noted.

Yanukovich also stressed that Ukraine should improve relations with Russia. "For too long, Ukraine's energy security has been blighted by an unpredictable diplomatic relationship with Russia. It is time to move on and look to the future—putting regional peace ahead of past mistakes. Ukraine, Russia and the whole of Europe will benefit if this is achieved," he said.

Meanwhile, Russian President Dmitry Medvedev said yesterday (24 August) that he wants Ukraine to become a fully-fledged member of the Customs Union of Russia, Belarus and Kazakhstan.

"The Customs Union is the highest form of integration, and we are interested in involving Ukraine, a large European country, a fraternal and friendly state, in the process," Medvedev told journalists.

Russia has long been urging Ukraine to join the Customs Union, whose members agreed last year to introduce a single customs tariff — the equivalent of Europe's common customs tariff applied to the import of goods across the EU's external borders — tempting Ukraine with the prospect of cheaper gas supplies.

But Ukraine is reluctant to become a full member, because such a deal would rule out signing a free trade agreement with the EU.

President Yanukovich explained in his Wall Street Journal opinion piece that his country will do whatever is needed to be in line with EU requirements.

He explained that Ukraine's current pension reform plan (including raising the retirement age for women from 55 to 60) is similar to controversial measures being undertaken by governments all over Europe to achieve economic and fiscal discipline. However difficult it may be, reforms like this are finally starting to structure Ukraine's economy on a par with EU standards, he added.

"In the next 10 years of independence, it is my hope to see Ukraine reunited with its European family. We cannot achieve this goal alone, and we are calling on our European friends to support our efforts. Our future depends on forging close ties with the EU and eventually becoming a full-fledged member," Yanukovich concluded.

"It looks like the current Ukrainian power, after yearly concessions to Russia, finally determined that the European choice has a lot more advantages than a close integration with Russia whose appetites don't lessen but rather increase.

"The last claims of Russian President Dmitry Medvedyev about the impossibility of a compromise format of Ukraine's relations with the Customs Union finally ruin the myth about the different attitude to Ukraine on the part of both Russian leaders.

"Medvedev's proposal for Ukraine to follow the 'Belarus scenario' in energy cooperation, i.e. that the country should sell its gas-transport system to Russia, dots all the 'i's.

"Yanukovych is absolutely right to speak about the advantages for the EU from Ukraine's membership. But Yanukovych doesn't answer if he and his team are ready to expand the European criteria of society development, i.e. the Copenhagen criteria regarding democracy, rule of law, human rights."