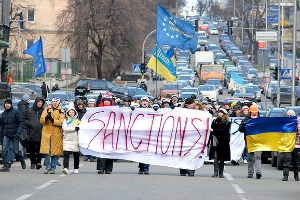 Tough anti-protest laws hastily passed by the Ukrainian parliament last week were enacted today (21 January) with their publication in the official journal, despite protestors and the EU calling for Ukrainian President Viktor Yanukovich to drop the legislation.

The controversial new laws, branded as "dictatorship" laws by the pro-EU opposition, were published on the website of Golos Ukrainyi, the country’s official gazette, which is under the parliament's authority.

As the Ukrainian daily Pravda writes, this means that the bulk of the legislation enters into force one day after publication – meaning Wednesday 22 January. According to the same newspaper, MPs from the opposition parties Svoboda and Batkyvshchyna had tried to prevent the printing of the paper gazette, without success.

The development allows the authorities to crack down on demonstrators and jeopardises efforts by the EU for political compromise. Once again, the development appears to indicate that Yanukovich’s recent appeals for compromise may have been only tactics to buy time.

Yanukovich is battling to reassert his authority after scores of people were injured in Kyiv on Sunday in clashes between protesters and police that could seriously hurt his chances of re-election next year.

With tension still high, about 1,000 protesters confronted police on Monday near Kyiv's main government headquarters. Groups of mainly young people hurled projectiles at police throughout the day and ignored appeals to disperse.

After weeks of mass protests over Yanukovich's decision to shun a trade pact with the European Union and turn instead towards Russia, demonstrators have been further enraged by sweeping laws rammed through parliament to curb public protest.

"I ask you not to join those who seek violence, who are trying to create a division between the state and society and who want to hurl the Ukrainian people into a pit of mass disorder," Yanukovich said in an appeal on his website.

He called for "dialogue and compromise" to end the unrest. But he made no mention of possible concessions, nor did he refer to peace talks with the opposition which were to have got under way on Monday.

The opposition warned him not to use these as an effort to buy time, while boxer-turned politician Vitaly Klitschko, one of its leaders, insisted he wanted Yanukovich to take part personally in the talks. As of Monday evening it was unclear if and when talks would take place.

The violence, the worst civil unrest anyone could remember in post-war Kyiv, stemmed from a rally on Sunday attended by more than 100,000 people in defiance of a hastily adopted package of anti-democratic legislation.

Despite opposition calls for only peaceful action, the rally descended into violence when masked youths broke away and tried to march on parliament before being stopped by police.

In the ensuing clashes, more than 60 police were injured, with 40 being taken to hospital, police said. Kyiv's medical services said about 100 civilians had sought medical attention.

Two RFE/RL Ukrainian Service journalists were beaten and detained by police while covering antigovernment protests on Monday. After their release, correspondent Dmytro Barkar and cameraman Ihor Iskhakov described the events. And a cameramen from the Ukrainian ‘Fifth channel’ TV filmed a special force firing with plastic bullets at him. “I was lucky he shot my camera, not my head”, he said.

Another journalist, Pavlo Ivanov, appeared before cameras, showing his wounds from plastic bullets, including in his head. “Journalists were shot at specially, with special forces aiming in the head”, he said.

Streets on Monday were littered with bricks and debris, including burned-out buses and trucks from Sunday's mayhem in which protesters bombarded police with fireworks, flares and later petrol bombs. Police replied with rubber bullets, stun grenades and water cannons.

Seeking to keep the advantage established on the streets, the opposition on Monday warned Yanukovich that he should not try to buy time in the hope protesters would lose heart.

"It's important that these talks have a real result," said Klitschko, who met Yanukovich late on Sunday at his country residence as the clashes raged.

"If the authorities again break their word, the situation will inevitably escalate," he said, adding that the president must be part of any dialogue.

Klitschko, seen as a strong potential contender for the presidency, later urged people outside Kiev to come to the capital to swell the ranks of protesters.

The protests convulsing the ex-Soviet republic stem from Yanukovich's decision to spurn the EU's free trade deal in favour of closer economic ties with Russia. He has been rewarded by a $15 billion (€11 billion) aid package from Moscow including credits and much cheaper gas.

Apart from the violence near the government building, hundreds of protesters remain camped on Kyiv's main Independence Square, which has become a platform of resistance to Yanukovich's rule.

The trigger for Sunday's large rally was the passage of new laws which outlaw virtually all anti-government protest and, the opposition says, pave the way for a dictatorship.

The laws ban unauthorised installation of tents, stages or loudspeakers in public and allow heavy jail sentences for participation in "mass disorder". They outlaw dissemination of "extremist" or libellous information about Ukraine's leaders.

Arriving in Brussels for a meeting of EU foreign ministers, Swedish minister Carl Bildt said: "It is the most solid package of repressive laws that I have seen enacted by a European parliament for decades."

Bildt and his Lithuanian counterpart, Linas Linkevicius, said further violence could lead to EU sanctions against Ukraine, although no official discussions had been held so far.

"Personally, I should say that if something goes wrong, it cannot be ignored. It will not be ignored by EU member states," Linkevicius told Reuters on the sidelines of an EU foreign ministers' meeting.

In practice it might be hard for EU governments to agree on sanctions. Any measures would probably be limited to asset freezes or visa bans against individuals deemed responsible for violence.

Up to now, Yanukovich has refused to yield to any of the opposition's core demands to sack his government and the interior minister over heavy-handed police action against demonstrators in December.

EU foreign ministers adopted yesterday Council conclusions on Ukraine in which they called on “all actors” to exercise restraint and on the authorities to fully respect and protect the peaceful demonstrators' right to assembly and speech, and the freedom of the press.

“All acts of violence must be duly investigated and those responsible brought to justice”, the EU ministers stated.

But many Ukrainians find this EU position weak. About 300 activists gathered in front of the European Union delegation office in downtown Kyiv yesterday, calling on the EU to impose economic and visa sanctions against leading officials in the Ukrainian government.

Following the news that Yanukovich failed to sign the AA at the Vilnius summit on 28-29 November, hundreds of thousands of Ukrainians took to the streets, demanding his resignation [read more]. The protests, called EuroMaidan, have lasted ever since.