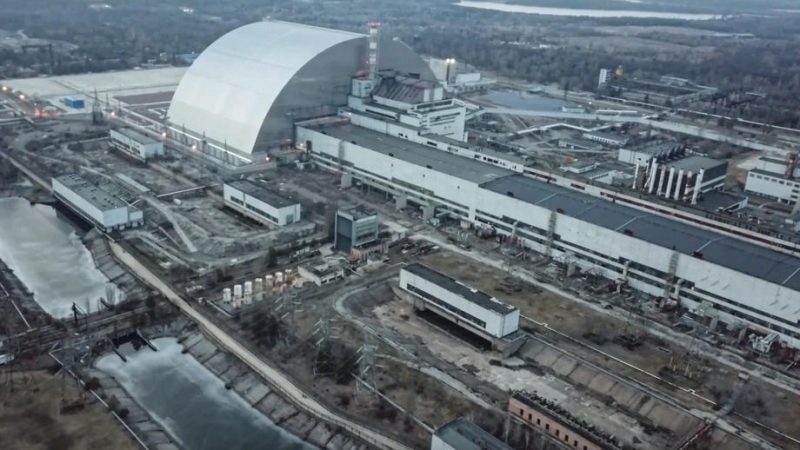 A still image taken from a handout video made available by the Russian Defence Ministry press service shows a general view of the Chernobyl Nuclear Power Plant in Pripyat, Ukraine, 7 March 2022. Russian President Putin on 24 February 2022 announced a "special military operation against Ukraine". Martial law has been introduced in Ukraine, and explosions are heard in many cities including Kyiv. [Handout photo/EPA/EFE]

Ukraine said on Wednesday (9 March) there was a danger of a radiation leak at the Chernobyl nuclear power station after electricity was cut off to the plant, but the UN nuclear watchdog saw “no critical impact on security”.

State-run nuclear company Energoatom said a high-voltage power line had been damaged during fighting between Ukrainian troops and Russian forces who are occupying the defunct plant, and that it had been cut off from the national power grid.

It said “radioactive substances” could eventually be released, threatening other parts of Ukraine and Europe, if there was no power to cool spent nuclear fuel stored at the plant that suffered the world’s worst nuclear accident in 1986.

“After that, cooling systems of the storage facility for spent nuclear fuel will stop, making radiation leaks imminent,” he said on Twitter. “I call on the international community to urgently demand Russia to cease fire and allow repair units to restore power supply.”

The only electrical grid supplying the Chornobyl NPP and all its nuclear facilities occupied by Russian army is damaged. CNPP lost all electric supply. I call on the international community to urgently demand Russia to cease fire and allow repair units to restore power supply 1/2

The International Atomic Energy Agency (IAEA) said on Twitter that the “development violates (a) key safety pillar on ensuring uninterrupted power supply” but that “in this case IAEA sees no critical impact on safety.”

IAEA and #Ukraine nuclear regulator agree that loss of power at #Chornobyl Nuclear Power Plant would not have a critical impact on essential safety functions at the site. https://t.co/iaCd3hBaZG pic.twitter.com/QYuzLmspVW

The IAEA had warned on Tuesday that the systems monitoring nuclear material at the radioactive waste facilities at Chernobyl had stopped transmitting data.

The Chernobyl plant, which is still radioactive, lies about 100 km from Kyiv. Its fourth reactor exploded in April 1986 during a botched safety test, sending clouds of radiation billowing across much of Europe.

A nuclear expert with knowledge of the plant’s system said there was cause for concern about the situation, and a key question would be how rapidly power can be restored.

“Power cuts to nuclear facilities are potentially very dangerous,” said the expert, who declined to be identified because he is not authorised to speak in public about the situation.

“The power cut could lead to water in the storage facility evaporating and exposure of spent fuel rods. They could eventually melt and that could lead to significant radiation releases.”