By Georgi Gotev | EURACTIV.com and Reuters 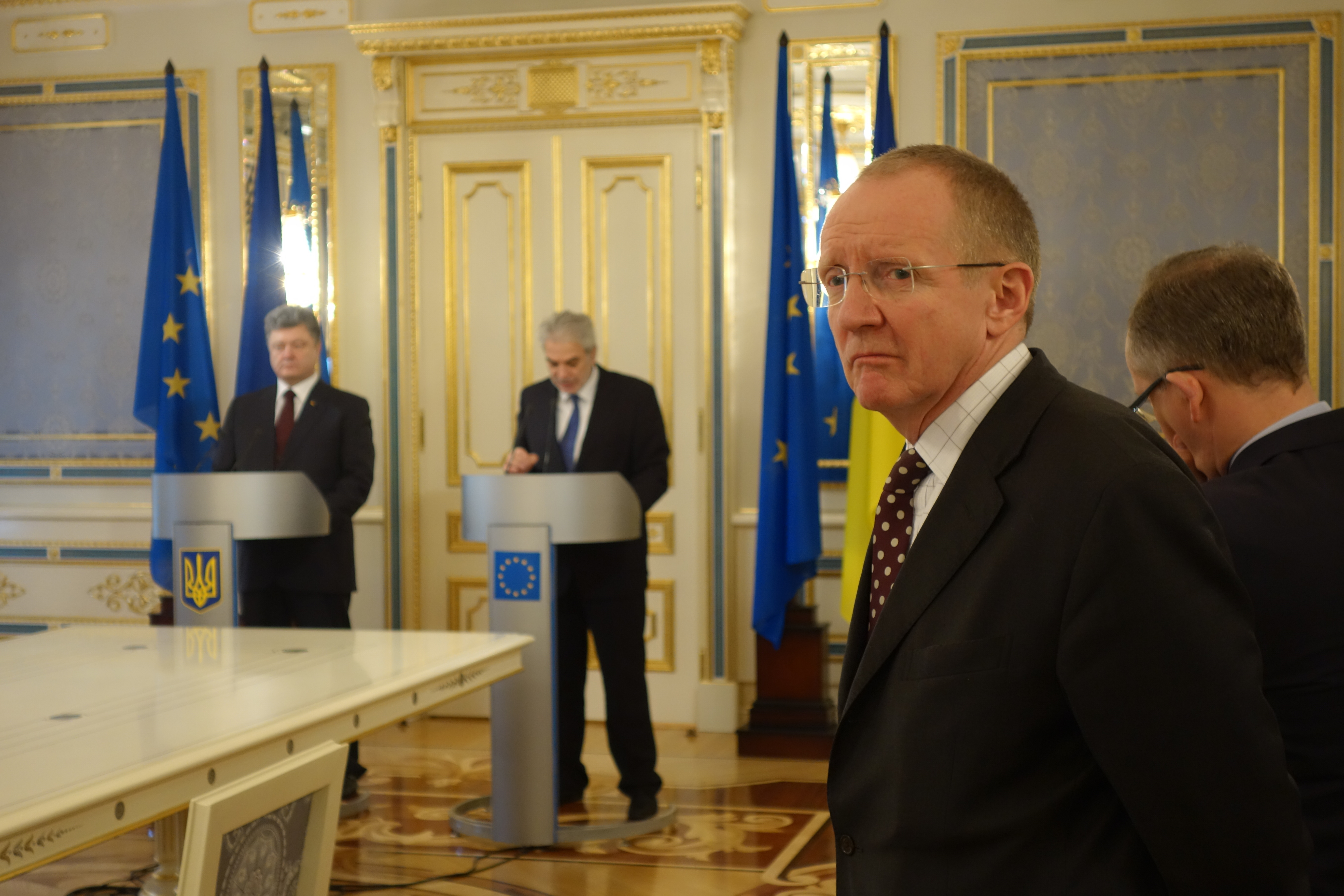 Ukrainian President Petro Poroshenko said on Monday (26 January) he will give the EU ample evidence of who is behind the recent shelling of the city of Mariupol, in which more than 20 people were killed in a missile attack. EURACTIV reports from Eastern Ukraine.

The Mariupol killings and others will be submitted to the International Criminal Court in the Hague, Poroshenko said.

The Ukrainian President made his announcement ahead of a meeting with Humanitarian Aid and Crisis Management Commissioner Christos Stylianides, who is in Ukraine to deliver assistance to the population suffering from violence in the separatist Eastern part of the country.

Pro-Russian rebels launched an offensive against the strategic port of Mariupol in eastern Ukraine on 24 January, prompting the European Union’s foreign policy chief to warn of a further “grave deterioration” in EU-Russian relations.

According to different sources, the rebels had killed between 20 and 30 people and injured some 90 others by firing rockets from long-range GRAD missile systems.

The city of Mariupol, on the Sea of Azov, is located on land that links Crimea to the Russian mainland.

The deadly rocket attacks on Mariupol were later characterised as a war crime by a senior UN offficial because they intentionally targeted civilians,

Jeffrey Feltman, the United Nations’ political affairs chief, told an emergency meeting of the Security Council on Monday (26 January) that crater analysis of the shelling showed it came from the rebel-controlled territory.

“The entity which fired these rockets knowingly targeted a civilian population,” Feltman said, citing the analysis by the Organisation for Security and Cooperation in Europe (OSCE). “This would constitute a violation of international humanitarian law.”

“Russia’s end goal remains … to seize more territory and move the line of Russian-controlled territory deeper and deeper into Ukraine,” she said.

“This offensive is made in Moscow,” Power added. “It is waged by Russian-trained and Russian-funded separatists, who use Russian missiles and Russian tanks, who are backed up by Russian troops.”

“Stop egging on the Ukrainian hawks,” Churkin appealed to Western governments. “The only thing that will lead to is an even greater catastrophe.”

The International Criminal Court (ICC) in the Hague has opened nine investigations in countries or territories such as Uganda and Darfur, and has indicted 36 individuals, including former Libyan leader  Muammar Gaddafi  and former Ivoirian President Laurent Gbagbo.

“I plan to provide the Commissioner with additional comprehensive information about recent developments in the anti-terrorist operation zone, including the blood-curdling terrorist act in Mariupol, as well as facts that the Russian side and the terrorists deliberately ignore the Minsk agreement,” Poroshenko said, speaking through an interpreter.

The President said he hoped the data will help gather consensus at the extraordinary meeting of EU ministers of foreign affairs on 29 January in Brussels. He made no mention of new sanctions, but EU ministers will meet in principle to debate if the recent escalation of the conflict in eastern Ukraine should trigger additional sanctions against Russia.

“Crimes against humanity must be addressed adequately. We are going to refer to the Hague tribunal for these matters,” Poroshenko said.

Stylianides said he came in Kyiv to express the EU solidarity with the people of Ukraine.

“I strongly condemn the attacks in Mariupol that have left to the loss of so many lives. I’m deeply concerned about the escalation of the conflict,” Stylianides said.

In fact, his visit has been planned well ahead of the recent escalation, and was intended to provide additional humanitarian assistance ahead of the harsh winter.

Stylianides announced an additional €15 in humanitarian assistance, to help the most needy in Mariupol and other areas. He said that this brought the EU emergency aid, which includes that of member states, to €95 million.

Three cargo planes will deliver humanitarian aid to Ukraine (tents, blankets, sleeping bags and warm clothes) tomorrow (27 January) at the airport of Dnepropetrovsk, where Stylianides will be present. Aid is also provided by road.

However, Claus Sørensen, Director General of the Commission’s humanitarian aid department (DG ECHO), told EURACTIV that it was very important that aid does not get diverted for other uses.

One of the objectives of Stylianides’s visit was to speak to Ukrainian authorities about facilitating the delivering of humanitarian aid, Sørensen said. There were various obstacles in terms of bureaucracy, like attempts to tax the aid, or create problems at the customs, he explained.

Describing the situation as “very chaotic”, the official said, “This doesn’t make us happy, this is not criticism, but we will tell our Ukrainian friends to put order in their house,” he said.

The Commission had competent partners on the ground, Sørensen continued, mentioning the International Committee of the Red Cross (ICRC), People In Need (PIN), a Czech organisation, UNICEF, the UN Children’s Fund, OCHA, the UN Office for the Coordination of Humanitarian Affairs, which had opened an office in Donetsk.

The official explained that since Ukraine was not a poor country, the best instrument to provide assistance is the cash-and-voucher system, so that people buy what they need in the shops.

Asked about the pensions which the Ukrainians in rebel-controlled areas no longer receive, Sørensen said a system to protect those pensions could be put in place. His advice to the Ukrainan government was to go through international organisations, and work with cash and vouchers that are under their control.

“It’s very important that elderly people have food, have the possibility to buy their primary necessities. This must continue,” Sørensen said.

The Ambassador of Ukraine to the EU Kostyantyn Yelisieiev informed his EU counterparts that the Ukrainian security services have direct evidences that Russia is involved in the preparation of terrorist acts in the Ukrainian cities, including Odessa, Kharkiv, Mykolaiv. “Obviously, Russia not only supplies weaponry and troops to the Ukrainian territory but also exports terrorism”, he wrote

More than 900,000 people have been displaced within Ukraine and close to 600,000 have fled abroad. Around 1.4 million in the affected region are highly vulnerable and in need of humanitarian assistance.

In response to the humanitarian crisis, the European Commission has already provided over € 32.5 million: € 11 million in humanitarian assistance, of which around 40% is going to non-government-controlled areas, and € 21.5 million for urgent preparations for the winter and recovery aid. The Commission's assistance is also addressing the immediate needs of the Ukrainian refugees beyond Ukraine's borders. Funding coming from the Member States amounts to over € 47 million.