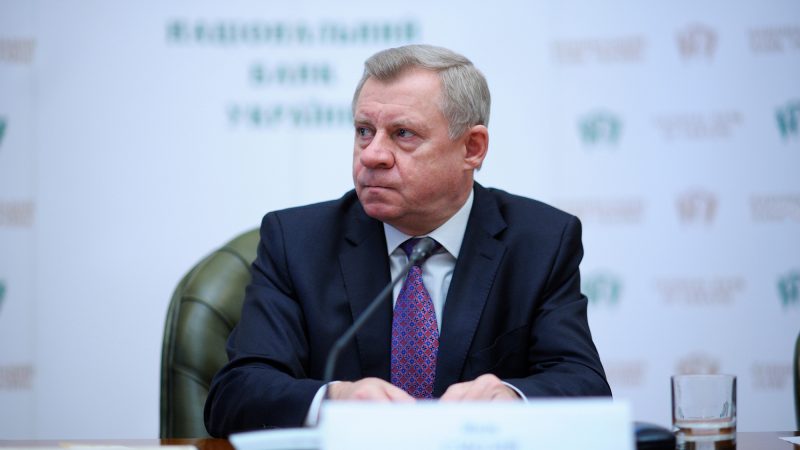 “For a long time, the National Bank of Ukraine (NBU) has been under systematic political pressure,”  Yakiv Smolii said in a statement announcing his resignation.

“This makes it impossible for me, as the Governor, to effectively carry out my duties as the head of the National Bank of Ukraine and interact with other government agencies.”

“Let it be a warning for attempts to undermine institutional independence of the central bank,” he wrote on social media.

I’ve submitted my resignation appeal to the President. This decision has been taken as an answer to systematic political pressure that denied fulfillment of my duties as the Governor. Let it be a warning for attempts to undermine institutional independence of the central bank. pic.twitter.com/cFQuAlakrM

The bank’s board in a separate statement shared Smolii’s concerns, adding it will “continue its work in order to preserve macrofinancial stability and institutional capacity of the NBU.”

The board asked “the President, government, and politicians to start an effective dialogue with the central bank and allow the NBU to perform its tasks under the Constitution.”

“We emphasise that discussions on the activities of the NBU should be based solely on the principles of professionalism and should be devoid of politicisation, which may negatively impact the institutional capacity” and the bank’s independence, the statement read.

The commitment of Ukrainian authorities to safeguard central bank’s independence was one of the conditions of a new $5 billion loan from the International Monetary Fund (IMF), which was much much needed to prop up Ukraine’s developing economy amid the coronavirus storm.

Ensuring continued central bank independence is one of the four priorities of the “stand-by arrangement” loan besides mitigating the effects of the crisis, tackling corruption and preserving financial stability while clawing back costs from bank resolutions.

A $2.1 billion tranche of the 1.5 year program was sent last month but future disbursements will be subject to reviews the first of which may come in September, an IMF spokesperson said last month.

Further international aid that was conditional on the IMF loan, including financing from the World Bank and a €1.2 billion macro-financial assistance package from the EU, may now also be under threat.

Actors from the international community have expressed concern at Smolii’s resignation.

“An independent National Bank is a foundational achievement for Ukraine that has reduced corruption, driven growth and rescued a failed banking sector,” the G7 Ambassadors’ Support Group for Ukraine wrote on Wednesday (1 July).

“To undermine this crucial institution would be a big step back and jeopardise the credibility of and support for Ukraine‘s reforms.”

Canada’s ambassador in Kyiv, Larisa Galadza wrote on social media that she was “watching this with concern.”

Watching this with ++concern. An independent NBU has been key to 🇺🇦 achieving macro financial stability. It was key to securing billions in IMF support. It is key to investor confidence. Maintaining that independence is only way for 🇺🇦 to achieve the goals it has set for itself. https://t.co/VhjLG6AEZN

“The political pressure that Yakiv Smolii says caused him to resign raises serious concerns more generally — about Ukraine’s commitment to reforms and to overcoming the state capture of key institutions,” she added.

Concerns have also been expressed in the private sector.

Smolii “was hugely respected among the business community,” the President of the American Chamber of Commerce in Ukraine, Andy Hunder, wrote on Twitter.

“Businesses are now concerned about the future independence of the national bank and the continuation of the IMF program,” he said.

Tomáš Fiala, the CEO of investment management firm Dragon Capital, said they “will postpone new investments,” according to NV.ua, a news website. “What the authorities have been doing over the last five months is exactly the opposite of what investors, both domestic and international, expect from them and advise them,” he added.

“This is the last straw. One can only guess what the motives are, complete incompetence or the sabotage motivated by Russia,” Fiala said.