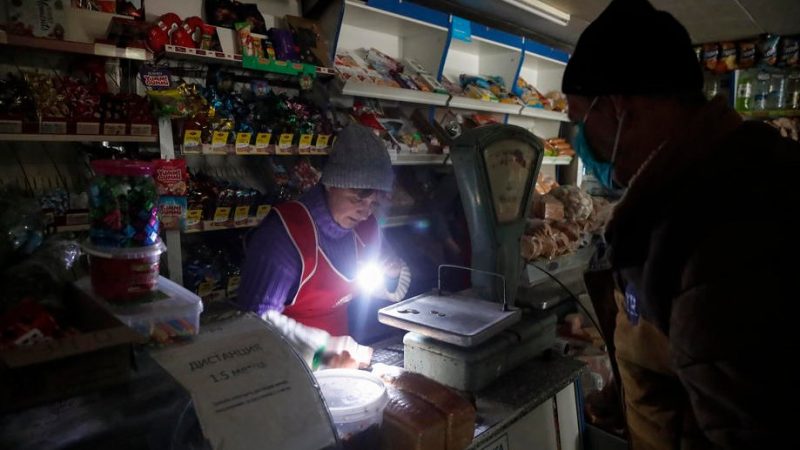 A shop owner uses a torch due to outage of electricity after shelling in the Vibrovka village not far from the pro-Russian militants controlled city of Luhansk, Ukraine, 23 February 2022 [Zurab Kurtsikidze / EPA-EFE]

Ukraine’s energy system is continuing to function as Russia invades the country, but a stray rocket that damages energy infrastructure or a nuclear power plant could prove a major blow, a Ukrainian energy company warned on Saturday (26 February).

The country’s energy system is under as much control as it can be given the circumstances, with some local disturbances, but no major impacts yet, representatives from the Ukrainian energy company DTEK told journalists in a press conference.

However, they warned that things change by the hour and that, although Russian forces are not targeting critical energy infrastructure at this stage, it is not guaranteed that a stray rocket would not damage something like a transformer or nuclear power plant.

According to Ukrainian’s Ministry of Infrastructure, there have already been risks. The Ukrainian air defence shot down a rocket heading towards the dam of the Kyiv Reservoir, the destruction of which could have caused an accident at the Zaporizhzhya nuclear power plant, the government said.

“If some big element of the energy system is damaged or destroyed … if it’s out of the grid unexpectedly, the system operator staff may not be able to timely do the necessary changes of the connections scheme, and that may lead the automatic cut off of the system to prevent the bigger disaster,” said Maxim Timchenko, CEO of DTEK.

“Taking into account the [in]accuracy of Russian rockets that they are sending from their territory, that may happen because they just can unexpectedly or unintentionally hit this big piece of infrastructure,” he added.

Ukraine is highly reliant on nuclear power, with 15 reactors, providing about half of its electricity.

But there is a danger that, intentionally or unintentionally, Russian forces could damage these or hit vital infrastructure, causing a major disruption to the electricity supply, said Timchenko.

Currently, all Ukrainian nuclear power plants – barring the now out of commission Chernobyl – are in Ukrainian hands and defended by the military.

However, there are concerns about a thermal power plant and a nuclear power plant – the biggest of their kinds in the country – located around the town of Enerhodar in the south of Ukraine, which Russian troops are currently 25 km away from.

“Our military forces strengthen their positions around nuclear power plants but nobody can say with certainty [whether] they can keep them under control,” said Timchenko.

And with threats of stray Russian rockets comes the unthinkable: damage to a nuclear power plant that could create safety concerns, raising the spectre of the Chernobyl nuclear disaster in Ukraine in 1986.

“I don’t want to read in the news that somebody said about a high risk of nuclear explosion, but [my] first statement is that based on our experience for the last days, Russia is not targeting critical infrastructure, including nuclear power stations,” said Timchenko.

“Of course, the level of their madness [is] at the highest level, but I hope that it’s not at the level to start shelling nuclear power units. So it can be potentially unintentionally hit, like we experience in other infrastructural objects or facilities,” he added.

Indeed, there are already safety concerns around Chernobyl, which is currently held by the Russians. The Ukrainian government has warned that levels of radiation have exceeded due to military equipment moving the topsoil.

The Ukrainian government stresses that the responsibility for this situation lies with “the invaders”.

“This is one of the most serious threats to Europe today, as any provocations by the invaders in Chernobyl during the hybrid war could potentially turn into another planetary environmental catastrophe,” it adds.

Since Russia invaded on Thursday, the Ukrainian energy system has seen localised damage. One thermal power station is out of operation and disconnected from the grid. It was taken over by Russian forces on Saturday, according to DTEK.

Alongside this, 40% of DTEK’s 1 gigawatt of renewable energy is offline due to a broken connector that cannot be accessed to repair.

However, neither of these are major blows to the energy system.

“We experienced damages of transmission lines and substations in 50% of regional companies, but we do not have any major disruption of electricity supplied to our consumers in all the regions,” said Timchenko.

Some local regions are also suffering losses of gas. The Luhansk region has been disconnected from its gas supply due to damage to the network, according to Ukraine’s transmission system operator (TSO).

But, as of 7:30 on Saturday morning, the TSO was still transporting natural gas to consumers and keeping the system balanced, it reported. While some staff are now working remotely for their safety, the company’s facilities in all of Ukraine, including areas of military operation, continue to operate.

Because of the constant changes, Ukrainian energy companies are also meeting every two hours with the energy ministry. On Saturday, there was an agreement for energy prices to be set by a regulator due to the market uncertainty and vulnerability.

It has also been decided to switch the country’s thermal plants from using coal to gas because coal supply routes by sea are already blocked and routes over land are also at risk.

Ukraine has about 15-20 days’ worth of coal in reserves, so it switched to gas since most of its gas wells are still functioning and it can use Russian gas transiting through the country.

“As long as we have transit of Russian gas through our system, I believe we will have enough gas for our power generation,” said Timchenko.

Ukraine is currently disconnected from the Russian, Belarusian and EU electricity grids and Timchenko voiced doubt that the country will be reconnected to the Belarusian and Russian grids.

While there is baseload power from nuclear energy, Ukraine’s isolation limits the ability of the grid to adapt to demand.

Ukraine now wants full integration of its electricity into Europe’s grid and the network of transmission system operators (ENTSO-E). This could be done in months, if not weeks, said Timchenko.