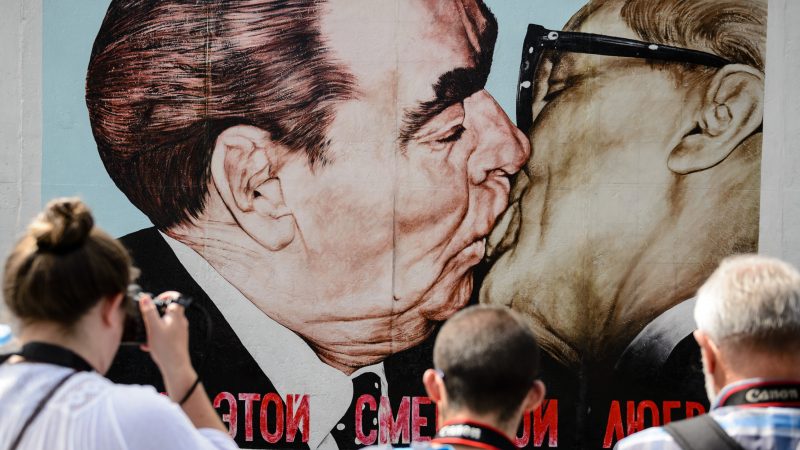 Tourists look at the graffiti painting 'My God, Help Me to Survive This Deadly Love' by Russian Dmitri Vrubel at a section of the former Berlin Wall called the East Side Gallery in Berlin, Germany, 10 August 2017. The artwork also known as the 'Fraternal Kiss' ('Bruderkuss' in German) depicts the kissing communist leaders Leonid Brezhnev of the Soviet Union and Erich Honecker of the GDR. [EPA/EFE/JENS SCHLUETER]

Unlike some of its NATO allies, Germany is not providing Kyiv with arms during its standoff with Russia, which has massed troops near Ukraine. The Wall Street Journal also reported last week that Berlin had refused to issue permits for German-origin weapons to be exported from Estonia to Ukraine.

“But we do not accept the official position (of Germany) regarding the supply of weapons and other decisions that undermine the security of Europe and de facto encourage the aggressor,” he said.

“We warned our Western partners that the Kremlin’s goal is not so much Ukraine as to undermine NATO and the EU.”

Russia has been pressing demands for a redrawing of post-Cold War security arrangements in Europe.

Its security demands, presented in December, include an end to further NATO enlargement, barring Ukraine from ever joining and pulling back the alliance’s forces and weaponry from eastern European countries that joined after the Cold War.

Reznikov suggested Russia may want to raise the question of restoring the German Democratic Republic, which was founded in the eastern part of Germany in 1949, ruled by communists and dominated by Moscow until the Berlin Wall fell in 1989. German reunification followed in 1990.

“The restoration of the GDR is a logical continuation of the Russian demands that have already been made,” he said.

Russia has said it does not plan to attack Ukraine and that it does not want war. It has made no reference to a desire to redraw Germany’s borders.

Chancellor Olaf Scholz said this month that Germany had “not supported the export of lethal weapons in recent years” and his defence minister has said Berlin does not send lethal weapons to crisis areas because it might “fuel the situation”.