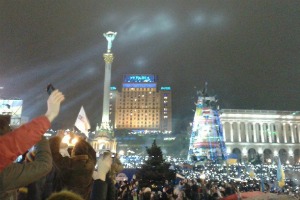 “The future of Ukraine lies in our hands, not in yours”, civil society activists told Ukrainian President Viktor Yanukovich in an unusual New Year video message.

More than fifty Ukrainians of all walks of life addressed Yanukovich in a video message, in an unprecedented response to the annual televised message of the head of state.

“Every year it’s the President who addresses the people on New Year’s Eve. But judging from his scarce statements made lately, he has nothing to say. Now it’s the time of the people to speak,” said the authors of the video.

“The future of Ukraine lies in our hands, not in yours. We are Europeans. We will be in the EU. With you or without you,” participants said in the video message.

Since Yanukovych refused to sign an Association Agreement with the European Union in late November, tens of thousands of Ukrainians have taken to the streets of Kyiv and other cities calling for Yanukovych and his government to resign.

Yanukovych issued a televised message calling for national unity in 2014 after what he called possibly "the most difficult" year in the history of independent Ukraine.

The President even appeared to make appeasing sounds to the protestors, saying that 2013 had been also “a year of progress through Maidans [protest squares] and national roundtable talks, political disputes and honest dialogue".

Yanukovych also said Kyiv would deepen ties with the EU, Russia, and China, and vowed that Ukraine's national interests would not be harmed. "We are continuing to work on an Association Agreement with the EU and we have renewed good, brotherly relations with Russia. We have achieved true progress in our relations with China, we are establishing a balance between the East and the West without giving up our national interests," Yanukovych pledged.

He added that he hoped that the Greek EU Presidency which started on 1 January would help his country sign the Association Agreement (AA) which he himself put on ice last November.

According to Ukrainian media sources, Yanukkovich wrote to the President of Greece Karolos Papoulias, saying: "I hope that the Hellenic Republic will contribute to the further development of cooperation between Ukraine and the EU aimed at the conclusion and effective implementation of the Association Agreement."

It is difficult to say to what extent Yanukovich's EU ambitions are genuine, and whether his statements are not simply an attempt to calm the protests.

Hours after Yanukovych's address was broadcast on TV, at least 100,000 people sang the Ukrainian national anthem in Kyiv's main square in a show of support for European integration.

Organisers quoted by Radio Free Europe said they were trying to set a world record. Earlier, the leader of Ukraine's opposition UDAR party, Vitali Klitschko, said opposition parties and their supporters will continue their peaceful demonstrations across Ukraine after the winter holidays. Klitschko, who is a former world heavyweight boxing champion, said on 31December that the opposition's next step will be a nationwide strike.

"Our next step – just to remind you that we are peacefully protesting and everything we pursue will be done legally – is to call for a national strike, an all-Ukrainian strike," Klitschko said.

"The first time it will last just for five minutes, then the next time for an hour, then for a day. With this we will demonstrate that we don't want to live or work under this government and by their rules," he said.

An opinion poll published last week by the local Democratic Initiative foundation showed that Yanukovich would lose a second round runoff to Klitschko if presidential elections were held now. The poll also found Yanukovich losing to other opposition leaders including Arseniy Yatsenyuk, leader of the Batkivshchyna, or "Fatherland" party.

Klitschko, who previously announced his intention to run for president in 2015, added that the opposition will have a single presidential candidate.

According to president's website, in his New Year's address to the Ukrainian people president Viktor Yanukovych noted: "In the long run, the year of 2013 has become the year of progress for us. Through maidans and national round tables, political disputes and frank dialogue we are moving on the way of understanding and national consolidation. This way is extremely challenging. But we have to go through it together, side by side.

“I'm convinced that economic troubles and political disagreements of the last year have only tempered us. This is our experience, our lessons and our mutual historical exams. And in 2013, despite all challenges, we have worthily passed the state maturity exam. Guided by national interests, we proceed on the way of building European Ukraine by means of deep modernization of economy and consecutive improvement of quality of people's life."

“The consistent policy of social justice based on presidential social initiatives is the guarantee of irreversibility of this way. We continue to work on the agreement with the European Union. We have renewed friendly, fraternal relations with Russia. And we have made a real breakthrough in the relations with China. We provide an effective balance between the West and the East without giving up our national interests. These steps give us a real opportunity to look forward confidently, preserving high social standards and directing necessary resources at the accelerated development of competitive national production in the new year of 2014."

The Independent: 'Ukraine Has Not Died Yet': Thousands sing national anthem at Kiev square on New Year's Eve

0 responses to “Ukrainians tell Yanukovich: We will be in EU, with or without you”