File photo. Treasury Secretary Steven Mnuchin testifies before the Congressional Oversight Commission during a hearing on the 'Examination of Loans to Businesses Critical to Maintaining National Security' on Capitol Hill in Washington, DC, USA, 10 December 2020. [Pool/EPA/EFE]

The United States on Monday (11 January) imposed sanctions on several Ukrainian individuals and entities, accusing them of US election interference and associating with a pro-Russian Ukrainian lawmaker linked to efforts by President Donald Trump’s allies to dig up dirt on President-elect Joe Biden and his son.

“Russian disinformation campaigns targeting American citizens are a threat to our democracy,” Treasury Secretary Steven Mnuchin, an ally of Trump who last week condemned the violence at the US Capitol by a pro-Trump mob, said in a statement.

The US Treasury Department accused the seven individuals and four entities of involvement in a Russia-linked foreign influence network associated with Ukrainian parliamentarian Andriy Derkach. The pro-Russian lawmaker was hit with sanctions by the US government in September over accusations he tried to interfere in the 2020 US election won by Biden.

The action freezes any US assets of those blacklisted and generally bars Americans from doing business with them.

“The United States will continue to aggressively defend the integrity of our election systems and processes,” Mnuchin added.

Trump is due to leave office on 20 January.

The Democratic-led US House of Representatives voted to impeach Trump in December 2019 on charges of abuse of power and obstruction of Congress stemming from the Republican president’s request that Ukraine investigate Biden and his son Hunter ahead of the election. The Republican-led Senate in February 2020 voted to keep Trump in office.

Derkach has been a key figure in promoting unsubstantiated allegations that Hunter Biden improperly used his influence with his father – vice president at the time – to help Burisma, a Ukrainian energy company on whose board he sat, and that Joe Biden improperly pressured Ukraine to fire a top prosecutor who had investigated the firm. 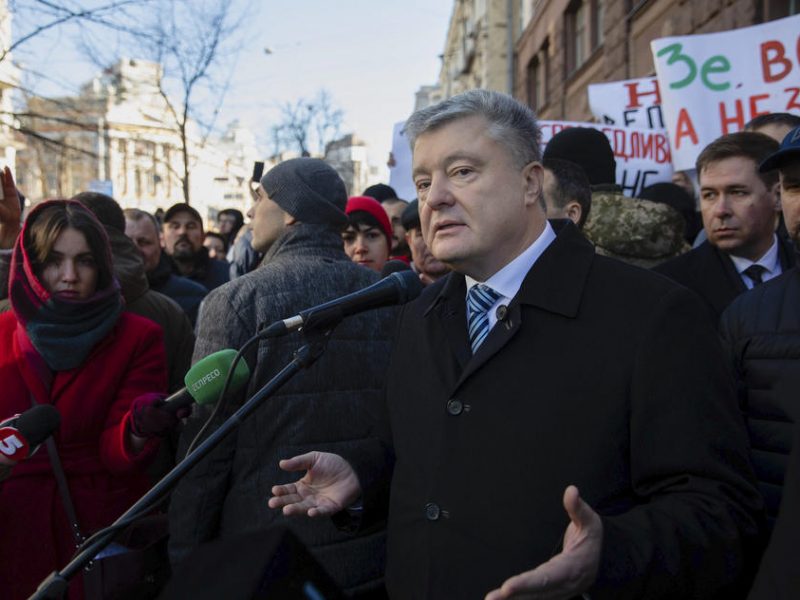 Former Ukrainian president in another round of questioning amid 'geopolitical' leaks

These allegations, intended to harm Biden’s candidacy, have been seized upon by Trump, his personal lawyer Rudy Giuliani and some Republican lawmakers.

Derkach said in a statement those blacklisted were being punished for exposing alleged corruption.

Trump allies were dismayed about the sanctions against Ukrainians who had served as sources for Giuliani when he was trying to collect information on Hunter Biden, a source close to the president’s legal advisers said.

Some of the blacklisted individuals, notably former Ukrainian government officials Andrii Telizhenko and Konstantin Kulyk, were reported in news media accounts to be sources for Giuliani.

Democratic Senator Mark Warner, set to become chairman of the Senate intelligence committee, said, “Much of the false information spread about President-elect Biden during and since the campaign had its roots in the entities being sanctioned today, as we saw Russian entities seed or amplify dangerous narratives that gained significant traction in far-right media.”

Among the entities blacklisted was the Ukrainian website NABU Leaks, the source of leaked audio of conversations between Biden and former Ukrainian leader Petro Poroshenko. The website’s content closely aligns with Derkach’s agenda and talking points.

Dubinsky in a statement said, “Once again I declare that I have never interfered in elections in other states, including the American election, and never have anything to do with the publications or other similar actions of the so-called Poroshenko-Biden tapes.”

“We didn’t expect such a broad list sanctioned under the ongoing administration,” Ukrainian anti-corruption activist Daria Kaleniuk said. “To me it is a good sign of the checks and balances system which still works in the US government.”