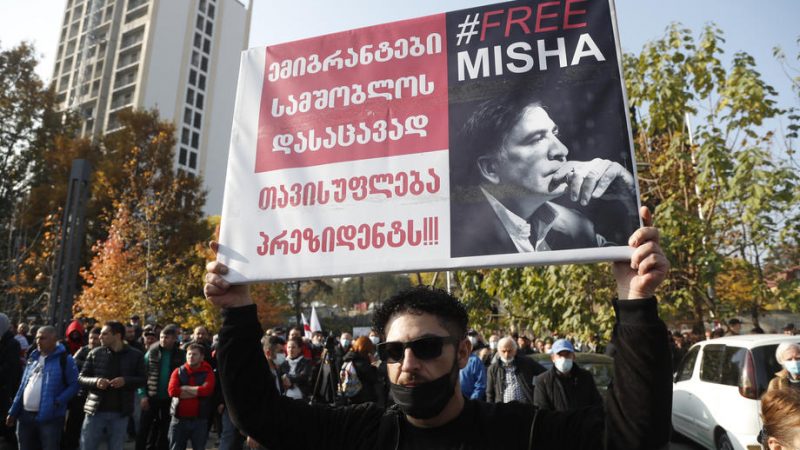 File photo. Participants of the 'United National Movement' gather for a protest against the arrest of the former Georgian President Mikheil Saakashvili in front of the Ministry of Justice in Tbilisi, Georgia, 9 November 2021. [EPA-EFE/ZURAB KURTSIKIDZE]

“We urge the government of Georgia to treat Mr. Saakashvili fairly and with dignity,” State Department spokesman Ned Rice said.

“We also strongly urge the Government of Georgia to ensure Mr. Saakashvili is able to attend all court hearings for his pending criminal cases, in line with international law.”

Saakashvili, who has refused to eat for 49 days to protest his imprisonment after returning from exile in Ukraine, was transferred to a prison hospital due to his deteriorating health.

And you tell us @SaakashviliM may have a fair trial in Georgia under this government? Video shows 3rd President of Georgia being violently transferred to another prison.
I call on Geo friends to demand transferring Saakashvili to another country for a fair trial (if needed). Now. pic.twitter.com/cBi3vt7M0y

On Wednesday, a council of medics set up by ombudsperson Nino Lomjaria said after examining Saakashvili that his “current status is assessed as critical” and that he faced a risk of fatal complications in the “immediate future”.

The 53-year-old pro-Western reformer has said he was assaulted by guards in prison and that he fears for his life.

Several opposition lawmakers have also been on hunger strike for days, demanding proper medical care for Saakashvili, a call reiterated by the United States and the European Court of Human Rights.