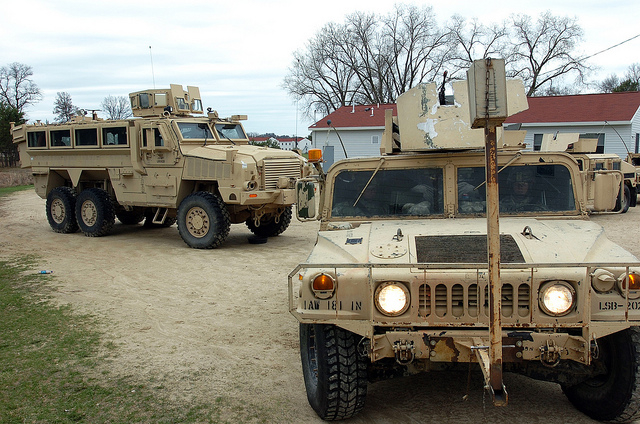 MRAP and Humvee. The US is offering to transfer thousands of such vehicles to allies, from Afghan and Israeli storage depots. [The National Guard/Flickr]

The United States is reconsidering whether to provide weapons to Ukraine in its fight against Russian-backed separatists, officials said on Monday (2 February), adding that no decision had been made.

“It’s getting a fresh look,” an official said of deliberations among Obama administration officials on whether to send weapons to prop up Ukrainian forces. “Where things will end up, we don’t know.”

US Secretary of State John Kerry travels to Kyiv on 5 February for talks with Ukraine’s government, the same day NATO defense ministers meet in Brussels.

The policy rethink reflects what American officials say is a frustration with Moscow’s continued support for rebels despite months of international economic sanctions, and the collapse of the latest attempt at peace talks at the weekend.

Washington already provides military equipment to Ukraine, such as counter-mortar detection units, body armor, binoculars, small boats and other gear. But it has delayed any decision for months on providing arms, from rifles to anti-tank weapons, as it sought a diplomatic solution.

However, State Department spokeswoman Jen Psaki said the United States was particularly concerned with mounting violence after months of fighting close to the Russian border.

Separatists pounded positions of Ukrainian government troops holding a strategic rail town as both sides mobilized more forces. Five Ukrainian soldiers were killed in clashes at the weekend and 15 civilians died on Saturday.

While the United States and Western allies pursue a diplomatic solution, the administration was constantly reviewing how to help Ukraine, Psaki said. “We haven’t taken options on or off the table.”

The West says the rebels are armed by Russia and supported by several thousand Russian troops, a claim Moscow denies. Both the EU and United States have imposed sanctions against Russia.

“I don’t think anybody wants to get into a proxy war with Russia,” Psaki said, “Our objective here is to change the behavior of Russia. That’s the reason we have put the sanctions in place.”

US President Barack Obama will host German Chancellor Angela Merkel at the White House on Monday. She has said Germany would not supply weapons to Kyiv’s military, but has not objected to Washington doing so.

A report by the Washington-based Atlantic Council on Monday said the U.S. should immediately authorize $1 billion in military assistance to Kyiv and coordinate it with Poland, Baltic States, Canada and Britain.

“Should we delay action, the West should expect that the price will only grow,” according to the report, which said military aid should include light anti-armor missiles, as well as unmanned aerial vehicles (UAV’s) and armored Humvees.

Former US Ambassador to Ukraine Jhon Herbst, one of the authors of the report, said it was clear diplomatic efforts had failed and Moscow believed it could have its way on the battlefield.