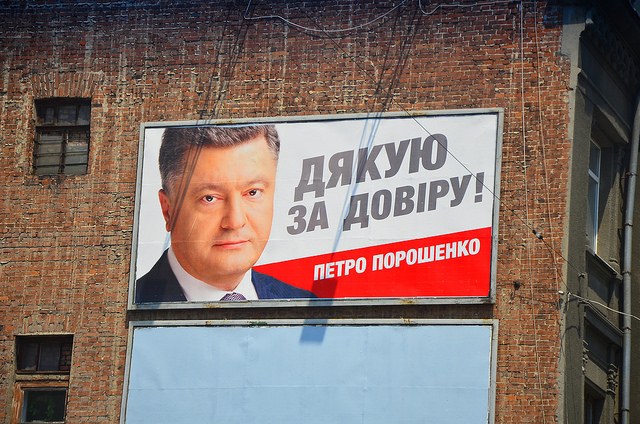 Pro-Russian rebels elected a separatist leadership in eastern Ukraine yesterday (2 November) in a vote President Petro Poroshenko called “a farce” and that the EU condemned as “an obstacle to peace”.

Mining electrician-turned-rebel leader Alexander Zakharchenko won over 81% of the vote, according to the rebels’ exit polls of an election that has worsened a standoff between Russia and the West.

The United States and European Union have already denounced it as illegitimate, but Russia has said it would recognise the result, deepening a crisis that began with the popular overthrow of a Moscow-backed president in February.

Poroshenko said the votes in the eastern Ukrainian rebel region of Donetsk and a separate one in Luhansk were “a farce, [conducted] under the barrels of tanks and machine guns.”

“I hope Russia will not recognise the so-called elections because they are a clear violation of the 5 September Minsk protocol, which was also signed by Russia’s representative,” he said, referring to an international peace agreement meant to end months of fighting between the separatists and Ukrainian troops.

In Donetsk, eastern Ukraine’s former industrial capital and the separatists’ political and military stronghold, Soviet music blared out of speakers in front of a central voting station carrying the separatist’s red black and blue flag.

Across the region suffering from years of neglect and months of conflict, Russian speakers wary of the new pro-European government in Kyiv stood in freezing temperatures to cast their vote, some near the remains of shrapnel from mortar bombings.

“We are citizens of Donetsk, and we don’t want to live under the Kyiv government that has turned its back on us,” said Sergei Kovalenko, 58, a private security guard who came to vote with his wife at a polling station set up at an elementary school.

People brought truck loads of carrots, potatoes and cabbages to polling stations where they were sold off for pennies to those waiting in line.

Russia’s Foreign Ministry, while stopping short of Minister Sergei Lavrov’s promise early last week to recognise the vote, said it “respects the will of the residents of southeast” Ukraine, Interfax reported.

The European Union meanwhile echoed objections that German Chancellor Angela Merkel made to Russian President Vladimir Putin on Friday and said the bloc would not recognise the vote.

“I consider today’s ‘presidential and parliamentary elections’ in Donetsk and Luhansk ‘People’s Republics’ a new obstacle on the path towards peace in Ukraine. The vote is illegal and illegitimate, and the European Union will not recognise it,” European foreign policy chief Federica Mogherini said in a statement.

Some of the heaviest artillery shelling of the past few weeks could be heard hours before voting was to begin. Rebels said more artillery was heard in a northern district of Donetsk during the vote.

Ukraine’s military said three of its soldiers had been killed in the past 24 hours, two of them by an explosion at a check point near the city of Mariupol, which is under Ukrainian control.

Although sporadically broken, the 5 September truce has allowed a semblance of normality to return to Donetsk following violence that has killed more than 4,000 people.

Kyiv says the Minsk agreements, signed by rebel leaders and envoys from Kyiv, Russia and the Organization for Security and Cooperation in Europe (OSCE), arrange for elections held under Ukrainian law that would appoint purely local officials.

But the rebels’ plan to elect leaders and institutions in a breakaway territory in the regions of Donetsk and neighbouring Luhansk violates that agreement, Kyiv says.

In the statement reported by Interfax, Russia’s Foreign Ministry urged a “dialogue between the central Ukrainian authorities and the representatives of the Donbass in line with Minsk agreements.”

Zakharchenko, the current rebel prime minister whose campaign advertisements are plastered across Donetsk, was almost certain to win the vote for the leadership of the self-proclaimed Donetsk People’s Republic.

Using colourful language in a heavy local accent, Zakharchenko, 38, has compared the region’s coal deposits to the oil reserves in the United Arab Emirates and has promised pensioners a stipend that will allow them to go on safari in Australia.

“For the rebels themselves”

Wearing a dark suit rather than his usual military fatigues, Zakharchenko dropped his vote into a ballot box at a polling station at a local school: “For justice, happiness, peace and prosperity.”

His opponents, two lesser known separatist figures, have rarely appeared in public. Public bulletins of the three candidates made no mention of the policies they endorse, but rather just listed biographical information.

“He [Zakharchenko] doesn’t eat, he doesn’t sleep. He works only for us 150% of the time,” said Lyudmila Kovalenko, who works at a school. She said the rebel leadership had fixed the windows of the school after it was hit by a mortar.

Zakharchenko’s election as rebel leader will mean little by way of change for the region which is increasingly dependent on Russia for support financially and politically.

Rebels say the election will legitimise the separatist leadership and consolidate power in the midst of a humanitarian crisis which will only be worsened by the oncoming winter.

They have brought in observers from Europe and the Russian-backed regions of South Ossetia and Abkhazia, which broke from the former Soviet republic of Georgia around the time of the break up of the Soviet Union, as Donetsk and Luhansk did from Ukraine this year.

An exit poll monitor, Natalia Samostrokova, 35, said that by noon Zakharchenko was winning with some “90% of the vote and then some” as she scanned the results of her survey in a voting station in Makiyivka, east of Donetsk.

Enthusiasm for the rebel cause, which was at its peak in Ukraine’s Russian-speaking east following the ouster of Moscow-backed Viktor Yanukovich, waned after violence closed banks and many stores, forcing people out of work.

Voting stations drew a steady stream of people on Sunday, but many Donetsk residents say the vote will change nothing and question its validity given there are no voters lists.

“I don’t see why I should vote. It won’t change anything, and besides the election isn’t for the people of Donetsk. It’s for the rebels themselves,” said Vitaly, 34.

The so-called elections in the occupied districts of Donetsk and Luhansk regions have nothing in common with people’s expression of the will and brutally violate the Minsk agreement, the President of Ukraine Petro Poroshenko said in a statement.

Poroshenko claims that "farce at a gunpoint organized by the two terrorist organizations in parts of Donbas is a terrible event that has nothing in common with the real expression of the people’s will."

Ukraine alongside the entire civilized world do not recognized this farce. "The international community, including many states and organizations, has already condemned these so-called elections. I expect that Russia condemns them as well, since it is a brutal violation of Minsk protocol of September 5 also signed by a representative of Russia," Poroshenko added.

The West hailed the election in Ukraine held on 26 October which was won by pro-European parties representing the Prime Minister Arseny Yatsenyuk and the President Petro Poroshenko.

But voting did not take place in areas held by the rebels or in Crimea and in eastern regions controlled by the pro-Russian rebels.

Poroshenko and his allies are trying to restore normalcy to the sprawling country of 46 million and draw a line under a year of upheaval that began with street demonstrations against Poroshenko's pro-Russian predecessor, Viktor Yanukovich.

Yanukovich was overthrown in February in what Russia called a "fascist coup" after he spurned a deal that would have deepened ties with the EU. Moscow responded by swiftly seizing and annexing the Crimea peninsula and backing the separatist rebellions in which more than 3,700 people have been killed.