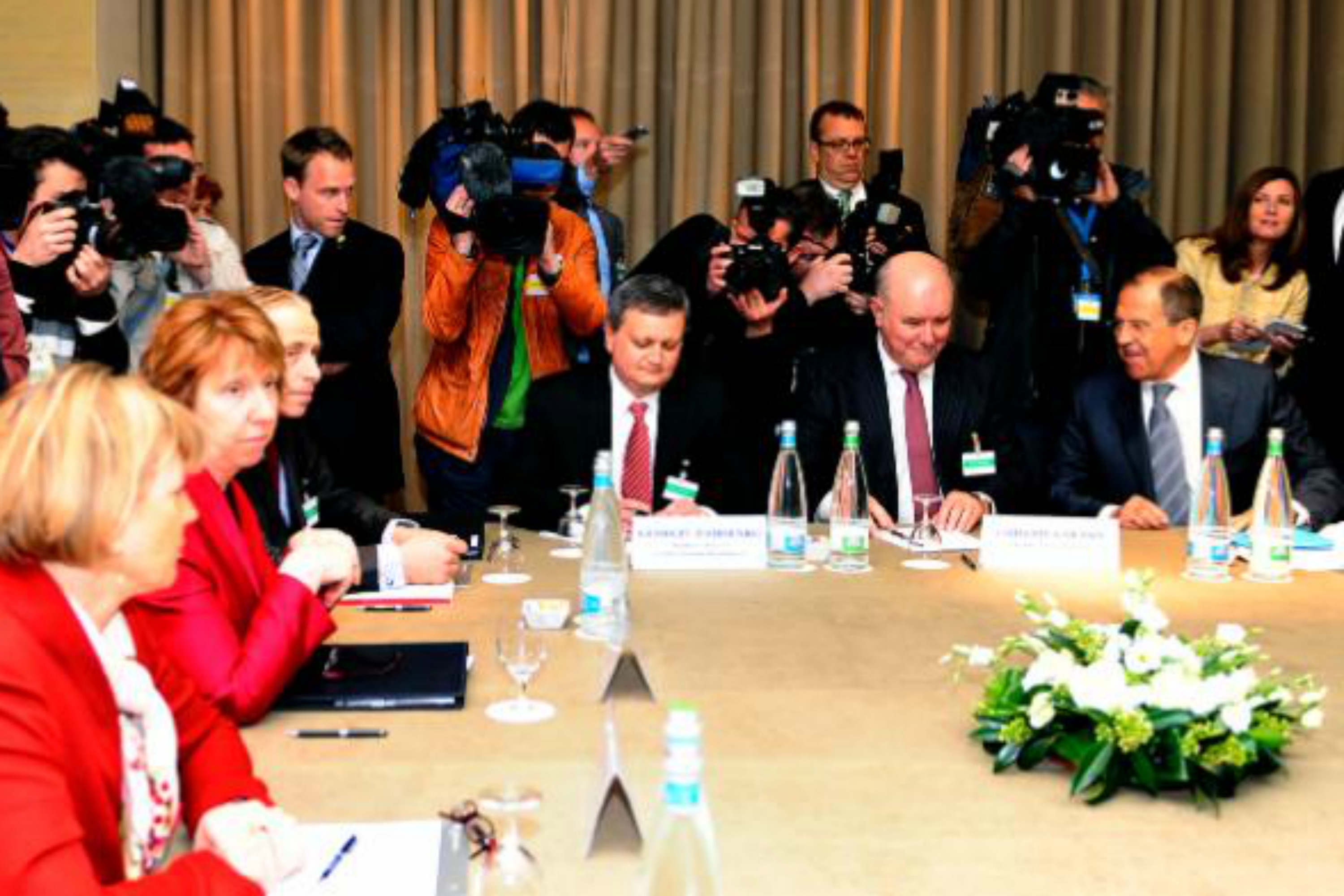 The United States, Russia, Ukraine and the European Union called after crisis talks yesterday (17 April) for an immediate halt to violence in Ukraine, where Western powers believe Russia is fomenting a pro-Russian separatist movement.

US President Barack Obama said the meeting in Geneva, between Russia and western powers, was promising but that the United States and its allies were prepared to impose more sanctions on Russia if the situation fails to improve.

Russian President Vladimir Putin, speaking in Moscow, accused Ukraine’s leaders of committing a “grave crime” by using the army to try to quell unrest in the east of the country, and did not rule out sending in Russian troops.

Putin said he hoped he would not need to take such a step, and that diplomacy could succeed in resolving the standoff, the worst crisis in East-West relations since the Cold War.

The comments came hours after separatists attacked a Ukrainian national guard base, and Kyiv said three of them were killed, in the worst bloodshed yet in a 10-day pro-Russian uprising [read more].

Ukrainian, Russian and Western diplomats were seeking to resolve a confrontation that has seen pro-Russian fighters seize official buildings across eastern Ukraine, while Moscow masses tens of thousands of troops on the frontier.

“All sides must refrain from any violence, intimidation or provocative actions,” a joint statement said.

“All illegal armed groups must be disarmed; all illegally seized buildings must be returned to legitimate owners; all illegally occupied streets, squares and other public places in Ukrainian cities and towns must be vacated,” it added.

“There is the possibility, the prospect, that diplomacy may de-escalate the situation,” Obama told reporters.

“The question now becomes, will in fact they use the influence they’ve exerted in a disruptive way to restore some order, so that Ukrainians can carry out an election, and move forward with the decentralization reforms that they’ve proposed,” Obama said at the White House.

It was unclear if Russia would meet Western demands for it to stop stirring unrest in the east and withdraw its troops from the Ukrainian border. Moscow denies it is active in Ukraine.

“It will be a test for Russia, if Russia wants really to show it is willing to have stability in these regions,” said Ukrainian Foreign Minister Andriy Deshchytsia.

The US State Department said the talks had achieved more than some people had expected.

But a spokeswoman added: “But again, it’s not a breakthrough until this is implemented on the ground, and we need to see the Russians follow up these words with actions.”

There was scepticism over whether the agreement could work.

“Diplomacy cannot succeed if there is no room for compromise,” said Ulrich Speck, a visiting scholar at Carnegie Europe. “The Kremlin is dedicated to get Ukraine under its control, one way or another. It feels that it has well advanced on that goal, and is not ready to back down. The West simply cannot agree to those conditions.”

US Secretary of State John Kerry said there would be additional sanctions on Russia if it did not act to calm tensions in Ukraine.

“If […] we don’t see a movement in the right direction, then there will be additional sanctions, additional costs as a consequence,” Kerry told reporters.

The United States and the European Union have so far imposed visa bans and asset freezes on a small number of Russians, a response that Moscow has openly mocked. However, the western states say they are now contemplating measures that could hurt Russia’s economy more broadly.

But some EU nations at least are reluctant to press ahead with more sanctions, fearing that could provoke Russia further or end up hurting their own economies.

Kerry also took the opportunity to condemn as “intolerable” suggestions in the eastern city of Donetsk that Jews had been ordered to register with authorities [read more].

Kerry and European Union foreign policy chief Catherine Ashton said the United States and the EU still had a significant difference with Russia over the status of Ukraine’s Crimea region, annexed by Moscow last month.

Seeking to reassure its eastern allies, NATO announced it was sending warships to the Baltic, while the United States approved more non-lethal military support for Ukraine.

Speaking on Russian television, Putin accused the authorities in Kyiv of plunging the country into an “abyss”.

The Kremlin leader overturned decades of post-Cold War diplomacy last month by declaring Russia had a right to intervene in neighbouring countries and by annexing Crimea.

Kyiv fears he will use any violence as a pretext to launch an invasion of eastern Ukraine by Russian forces.

“Instead of realising that there is something wrong with the Ukrainian government, and attempting dialogue, they made more threats of force … This is another very grave crime by Kyiv’s current leaders,” Putin said in his annual televised question-and-answer session with the Russian public.

“I hope that they are able to realise what a pit, what an abyss the current authorities are in and dragging the country into,” said Putin.

At the Ukrainian national guard headquarters in Mariupol, on the Sea of Azov, there was evidence the building had come under attack.

A grey police jeep was inside the compound on Thursday morning with broken windows, flat tires and bent doors. The gates of the compound had been flattened. There were shell casings outside the gates and several unused petrol bombs.

Interior Minister Arsen Avakov said an armed group of about 300 separatists attacked the base with guns and petrol bombs. Three separatists were killed and 13 wounded, he said.

In the meantime, Commission President José Manuel Barroso answered a letter Putin had sent to several European leaders on 11 April, warning them to “work out concerted actions to stabilize Ukraine’s economy and to ensure delivery and transit of Russian natural gas in accordance with the terms and conditions set down in the contract”.

In his letter, Barroso calls on Russia to remain a “reliable supplier” of gas to Europe and agrees to host trilateral consultations to resolve issues regarding gas flows.

“The proposed consultations should help to avoid an extreme scenario and safeguard security of supply and transit while at the same time creating the necessary conditions for a structured cooperation including notably the modernisation of Ukraine’s gas transit system,”Barroso wrote.

Moscow has so far sought a bilateral Russia-Ukraine consortium, which would not only operate, but own the gas transportation system [GTS]. Ukraine’s position has been that there should be a trilateral EU-Ukraine-Russia consortium to operate GTS. The position of the EU has been that the Union cannot participate in a commercial project, that European companies should be involved instead, and that funding should be sought through an international financial institution.

If there is a deterioration in Ukraine, which two EU diplomats said would involve evidence of Russian troops moving into Ukraine as an invading force, then EU leaders could hold a summit next week to decide on phase three sanctions [read more].

Worried about potential leaks of the sensitive data, the Commission informed each country only about the risks it would face, rather than sharing full details with all 28 member states. The assessments were handed out in brown paper envelopes to individual EU ambassadors during a meeting in Brussels.

The documents examine several categories of sanctions, including on energy, finance and trade, setting out the impact imposing the restrictions would have on the bilateral economic relationship between Russia and each country.