West’s ties with Russia frozen after year of Ukraine conflict 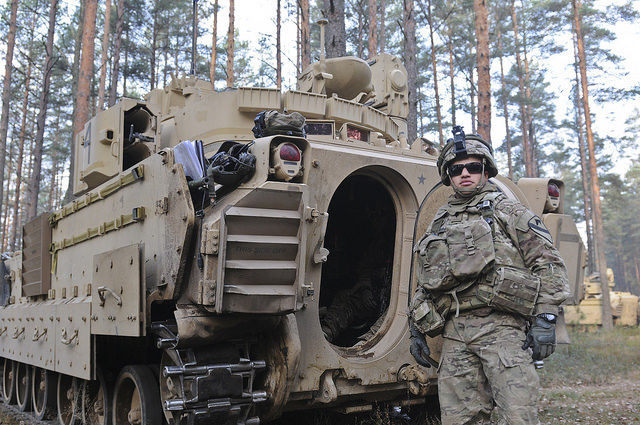 American infantry on excercise in Lithuania. [US Army Europe/Flickr}]

Relations between the West and Russia remain at their lowest since the Cold War, on the first anniversary of the start of the Ukraine conflict. But all bridges have not yet been burned, analysts say.

Washington and Brussels have imposed sanctions as part of a sea change in ties with Moscow, while a defiant Vladimir Putin has rejected accusations of Russian involvement in the fighting.

A fragile ceasefire has now held in Ukraine since February, but Europe’s relationship with Russia is stuck in the deep freeze.

“Trust is just not there,” Judy Dempsey of the Carnegie Europe think-tank told AFP.

A NATO diplomat was more scathing.

“The Russians have shown complete revisionism about international rules. That has created a confidence problem and in fact the situation is much more uncertain than during the Cold War,” the diplomat said.

Two decades of Western assumptions about a largely cooperative post-Soviet Russia — the Georgia war of 2008 notwithstanding — were thrown into turmoil by Moscow’s response to the Ukraine crisis.

Outraged Western nations were quick to take action after Russia’s annexation of Crimea in March 2014, followed by the start of the fighting between pro-Kremlin rebels and government forces on 6 April April.

Politically, they expelled Russia from the G8 club of industrialised nations, while economically the US and EU imposed first targeted individual sanctions and then, after the shooting down of Malaysia Airlines flight MH17, broader economic sanctions.

NATO meanwhile halted all cooperation with Russia, boosted air and sea patrols in response to Russian intrusions, and agreed to set up a quick reaction force to protect the alliance’s eastern flanks.

Putin meanwhile accused NATO of acting like a “foreign legion” in eastern Ukraine in a bid to contain a newly confident Russia, all the while denying that Moscow had any role in the conflict.

Since then the conflict has cost more than 6,000 lives.

Europe’s unity so far has been something of a surprise, given the divisions between hawks and doves in the 28-nation EU where concerns about the effect of sanctions on trade with Russia ran rife.

“Looking back, it is quite remarkable that unity has held,” said Dempsey. “Putin did not expect the EU to be united, he had always managed to play off one member state against the others.”

In many ways the Ukraine crisis has exacerbated a “dialogue of the deaf” between East and West.

“Russia has all these years proposed both to NATO and the EU to do something together, to talk about the problems,” Russian lawmaker Konstantin Kosachev told the German Marshall Fund think tank in Brussels recently.

“The answer was ‘no thank you Russia’. Russia was excluded from the dialogue.”

Vivien Pertusot, an expert at the IFRI think tank in Brussels, said the United States in particular had taken a “truly radical” stance on Russia.

“The reset of 2009 is dead and buried,” Pertusot told AFP, referring to US President Barack Obama’s bid to relaunch relations with Russia when he took office.

The EU meanwhile signalled at a summit last month that it would keep sanctions in place until the end of the year, the timeframe set out in February’s Minsk II peace accord for the implementation of truce measures.

But Washington has been alarmed to see some in Europe, where the impact of lost trade with Russia is heavily felt, pushing increasingly heavily for accommodation with Russia.

“I don’t give up the idea that we overcame the Cold War,” Mogherini said last month. “We are neighbours and we can’t change geography. You don’t change family, and the same goes for geography.”

She cited the fact that Russia and the West are still able to cooperate on issues such as Iran’s nuclear programme and Syria, saying that she hoped for similar work together on the chaos in Libya.

“Merkel is angry about Putin, which has made the relationship very tense.

But apart from sanctions, German trade with Russia has not fundamentally lowered,” Pertusot said.

But there will only be a thaw in relations if Putin decides to make further overtures towards Europe, a European diplomat said, adding that “there will always be the Donbass, this frozen conflict, between them and us.”