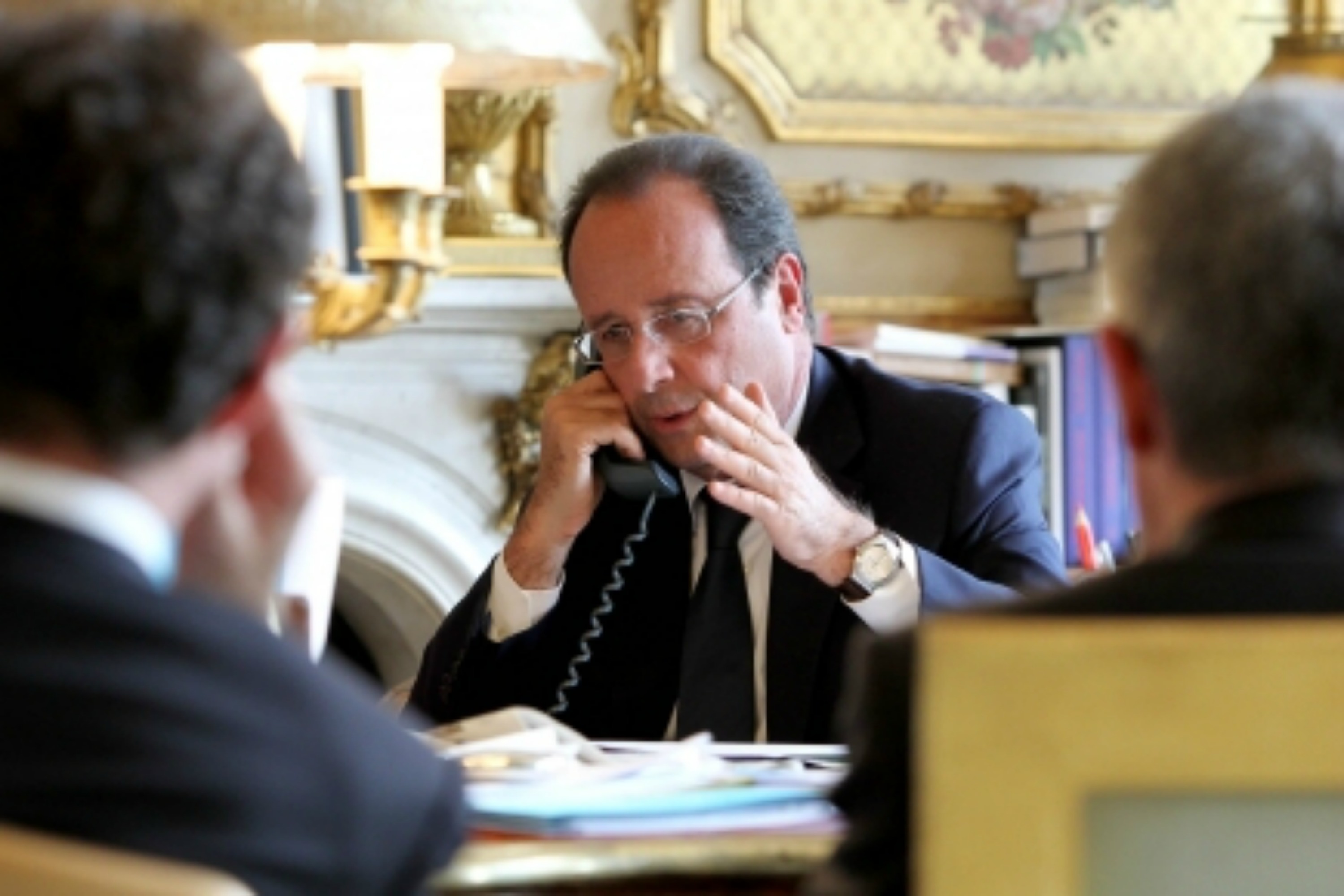 François Hollande on the phone with Vladimir Putin [French Presidency]

Western powers warned Russia yesterday (25 June) that they could impose new sanctions if Moscow did not do more to defuse the conflict in eastern Ukraine. Ukraine’s President Petro Poroshenko is due to sign his country’s EU association pact tomorrow in Brussels.

The upper house of Russia’s parliament fulfilled a request by President Vladimir Putin to rescind the right to invade Ukraine in defence of its Russian speakers that it had granted him in March.

However, a leading lawmaker said the power could be quickly restored if required, and Western governments indicated they would judge Russia by the progress that was made to end the fighting in eastern Ukraine.

On Tuesday, less than 24 hours after a bilateral ceasefire was agreed, rebels shot down a Ukrainian military helicopter, killing all nine on board. This prompted Ukrainian President Petro Poroshenko to tell his troops to return fire if attacked, declaring that he might call off the ceasefire altogether.

A Ukrainian government spokesman said the rebels had violated the ceasefire 44 times since Monday.

Moscow denies Western accusations that it has allowed fighters to cross into Ukraine along with heavy weapons to confront Ukrainian government forces, and that it is keeping its own troops close to the border to put pressure on Kyiv.

But during a meeting of NATO foreign ministers in Brussels, Secretary-General Anders Fogh Rasmussen told reporters: “I regret to say that we see no signs that Russia is respecting its international commitments.”

US Secretary of State John Kerry said Washington was working with its European Union partners, who hold a two-day summit in Ypres and Brussels beginning today, to prepare a new round of sanctions against Russia in case they are necessary.

Not all EU leaders back the idea, but British Foreign Secretary William Hague said that if Russia did not “stop the flow of arms across the border [and] stop supporting illegally armed separatist groups,” the case for tougher sanctions “will of course become stronger.”

The United States and EU imposed asset freezes and travel bans on Russian and Ukrainian individuals following Moscow’s annexation of Crimea in March. Washington has also targeted a number of Russian firms and banks it says are linked to Putin or his close associates.

US State Department spokeswoman Marie Harf said on Wednesday that Russia needed to secure its border, stop the flow of fighters and weapons into Ukraine and call on separatists to lay down arms and release monitors from the Organization for Security and Cooperation in Europe.

“Those are the important actions we are looking for,” Harf said. “We have additional sanctions ready to go.”

‘Sanctions can be considered’

German Chancellor Angela Merkel made clear that she also expected more action from Putin to support the ceasefire initiated by Poroshenko, which is due to expire on Friday.

“Progress is slow,” she told parliament. “Diplomatic solutions are always preferable but if nothing else works, sanctions can be put back on the agenda.”

Merkel, Putin, Poroshenko and French President François Hollande held a four-way phone call to discuss the crisis, where the Kremlin leader called for the ceasefire to be extended.

Putin had said in combative remarks on Tuesday that Ukraine must follow up the ceasefire with substantive talks to address the rights of Russian speakers. Many of them have been alienated by a wave of Ukrainian nationalism since Moscow-backed President Viktor Yanukovich was toppled in February.

Poroshenko announced in Kyiv that he planned to present a bill on increased regional autonomy to parliament on Thursday, but gave no details of what it contained.

However, with public pressure growing for a response to the downing of the helicopter, it was not clear that he could keep hopes of a peace process alive beyond the end of the week.

Aleksander Boroday, self-styled prime minister of the rebel “Donetsk People’s Republic,” who signed up to a ceasefire at a meeting on Monday, told a news conference in the eastern city of Donetsk: “There is no cessation of fighting. There are numerous ceasefire violations practically along the whole front line … Our adversary is actively redeploying forces.”

He said he saw no sense in negotiations, adding: “No further contacts are taking place, nor are more expected.”

Boroday also declined to comment on the shooting down of the helicopter, which appears to have been the work of another group of rebels who control the town of Slaviansk.

A Reuters correspondent found the streets of Slaviansk largely empty on Wednesday, apart from a rare car or cyclist.

Rebels said there had been no shelling on Tuesday, but that late on Monday one woman had been killed and another wounded when a residential neighbourhood was hit. A number of homes were damaged, including one where rebels said a mortar shell had exploded on hitting the roof.

‘No water, no electricity, no radio’

A local truck driver who identified himself as Andriy, 60, said the rebels had provoked the army to return fire.

“Why provoke fire if a ceasefire has been declared? We are sick and tired of this – no water, no electricity, food is running short. No TV, no radio, no information,” he said.

“We were so happy when they announced a ceasefire; we hoped for some respite. We never sought nor asked for help from Russia. What is Russia’s business here anyway?”

The United Nations said last week that 257 civilians had been killed since mid-April. The toll is likely to be even higher as many places have not been accessible to international monitors.

Russia’s human rights ombudsman, Ella Pamfilova, said on Wednesday that about 40,000 refugees from Ukraine were now living in dedicated shelters in Russia, although the total was likely to be much higher.

Moscow has already cut off gas supplies to Ukraine in a row over prices, and curtailed bilateral trade.

On Wednesday, Ukraine asked the International Monetary Fund to acknowledge the effect of the fighting as it decides on further disbursement of aid under a €12 billion bailout programme designed to shore up depleted foreign currency reserves and the state budget.

“Our partners from the IMF will take into account all the new challenges and complexities,” Prime Minister Arseny Yatseniuk told the government.

The two main regions of the rebel uprising, the heavy industrial zones around Donetsk and Luhansk, together account for nearly 18% of Ukrainian gross domestic product.

Just as the ceasefire expires on Friday, Poroshenko is set to sign a free trade agreement with the EU – the very pact that Yanukovich rejected in January under heavy pressure from Russia, which had wanted Ukraine’s 45 million people to join its own Eurasian Economic Union. Russia has already said it will respond by applying import duties to Ukrainian goods.

Commission President José Manuel Barroso said yesterday (25 June) that the agenda of the EU summit beginning today will also focus on Russia's reaction to the signature of the Association Agreements with Ukraine, Moldova and Georgia. He said that a trilateral consultation at ministerial level over the consequences of the AAs with Russia and Ukraine would be held in Brussels on 11 July.

Barroso also said the EU needed to remain “active and vigilant” regarding its Eastern neighbourhood, in particular after the signature of the AAs “where our responsibility increases and not diminishes”.