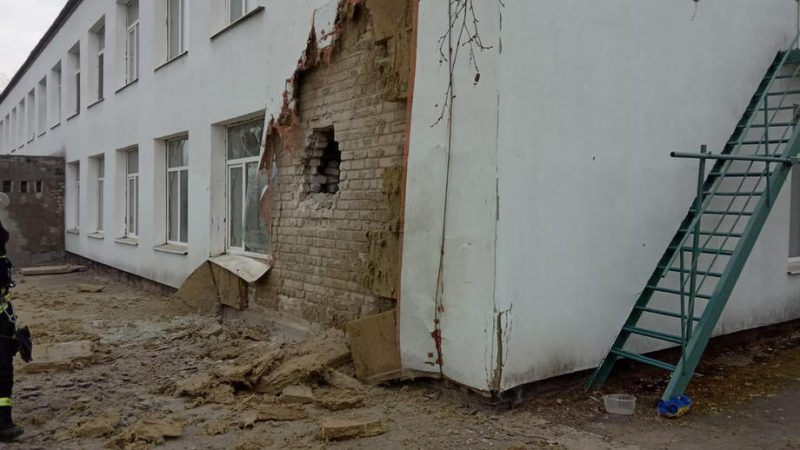 A handout photo made available by Ukraine's Joint Forces Operation (JFO) Press Service shows a damaged kindergarten in Stanytsia Luhanska, in the Luhansk region, eastern Ukraine, 17 February 2022. According to Ukraine's military on 17 February, the kindergarten at a village in the Luhansk region was damaged as a result of shelling by Russian-backed forces in eastern Ukraine. Two people were injured in the incident, Ukrainian officials reported. Local residents were taken to shelters, Ukraine's military added. [Handout photo/EPA/EFE]

Kindergarten worker Natalia Slesareva’s ears were ringing after she was thrown against a door by a shell blast during an attack that has sent tensions soaring, amid fears that Russia will invade Ukraine.

The projectile blew a hole in the wall of a two-storey building being used by 20 children and 18 staff in the government-held eastern Ukrainian village of Stanytsia-Luganska.

It was a close call.

Everyone escaped relatively unharmed after rushing to the other side of the building and cowering against the walls on the ground floor.

“The children were eating breakfast when it hit,” Slesareva told AFP. “It hit the gym. After breakfast, the children had gym class. So another 15 minutes, and everything could have been much, much worse.”

Both Kyiv and the Russia-backed separatists fighting each other across Ukraine’s southeast for the past eight years accused the other side of launching a dangerous wave of new attacks across the front.

Slesareva was still trying to make sense of what happened as she examined the piles of brick scattered across the damaged gym room.

“I was at my usual place at work, in the laundry room,” the 58-year-old laundress said. “The explosion wave blew me back against the door. Then — smoke, dust, broken windows.”

“I could not feel the right side of my head. Everything was ringing.”

A series of Ukrainian and Western leaders have expressed alarm and urged Russia not to exploit the tensions on the front line as a pretext to launch its feared offensive against Ukraine.

More than 100,000 Russian troops have all but encircled Ukraine during the Kremlin’s standoff with the West over NATO’s expansion into eastern Europe.

“The indiscriminate shelling of civilian areas constitutes a clear violation of the ceasefire and the Minsk agreements,” Rau said, referring to an international accord designed to end the war

“We call for the immediate prevention of further escalation.”

The @OSCE Chairman-in-Office, FM @RauZbigniew expressed serious concern about the reported shelling of a kindergarten in the area of Stanytsia Luhanska, in Luhansk region and called for restraint in the following statement ➡️https://t.co/xQ1NU9OOXo#OSCE2022POL pic.twitter.com/y58cIijiow

Thirty-seven other children who would have otherwise been in the class were at home because of coronavirus rules.

Another missile left a small crater near the children’s slides in the garden playground.

Local residents said the number of daily attacks in their part of the conflict zone began to rise around the time Russia launched new military drills near Ukraine’s border last month.

One woman who agreed to identify herself only as Natalia out of fear for her personal safety said that she and her husband rushed to the kindergarten in panic the moment they heard about the strike.

“I heard that they were shooting — they rang me from the kindergarten — and my husband and I rushed there by car to pick up our child,” she said.

“I was very scared. The kindergarten has no bomb shelter. It only has thick walls. But they even managed to puncture those,” she said. “I still can’t calm down.”

Slesareva sounded shaken hours after the dust had settled and the cleanup had begun.

“What happened today was a tragedy,” the laundry woman said. “Thankfully, no one was killed. I only have one wish: for this war to end.”