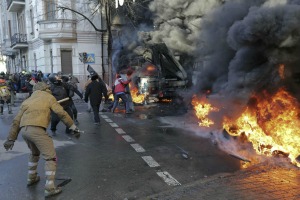 Ukrainian riot police fought protesters occupying a central Kyiv square early today (19 February) after the bloodiest day since the former Soviet republic, caught in a geopolitical struggle between Russia and the West, won its independence. At least 22 people have lost their lives in less than 24 hours.

After hours of clashes, police were gaining ground in Independence Square, centre of three months of protests against President Viktor Yanukovich, but demonstrators managed to find protection behind a burning barricade of tires and wood.

Police have gained control of almost half the square and several floors of a trade union building, used as an anti-government headquarters, were on fire as dawn was breaking.

At least 14 protesters, seven policemen and one journalist were killed in violence that erupted on Tuesday and continued into the early hours of Wednesday. Many were killed by gunshot and hundreds of people were injured, with dozens in serious condition, police and opposition representatives said. The Ministry of Health confirmed the death of 22 people and 241 wounded.

The daily Vesti writes that their correspondent Vyacheslav Veremiy was shot dead in the chest by masked people. According to the news website Leviy bereg he was killed by so-called “titushki”, pro-government thugs.

Opposition leaders Vitaly Klitschko and Arseny Yatsenyuk said that they had quit talks with President Viktor Yanukovich without reaching any agreement on how to end the violence.

"The government must immediately withdraw troops and put an end to the bloody conflict, because people are dying. I told Yanukovich this," Klitschko said after the late night talks. "How can we hold talks while blood is being shed?"

Yanukovich later urged leaders of the opposition to dissociate themselves from radicals, saying otherwise he would "talk differently" with them.

The unrest has spread to at least three cities in the western part of the country. Police said protesters had seized regional administration headquarters in the cities of Ivano-Frankivsk and Lviv. Media said protesters torched the main police station in the city of Ternopil.

The authorities have restricted traffic coming into the capital to prevent protesters from getting reinforcements. Kyiv authorities also closed down the underground.

Earlier, the state security service set a deadline for the demonstrators to end disorder or face "tough measures". Then the police advanced to the square before launching a full assault in the early hours, throwing stun grenades and using water cannons.

Nationwide demonstrations erupted in November after Yanukovich bowed to Russian pressure and pulled out of a planned far-reaching trade pact with the European Union, deciding instead to accept a Kremlin bailout for the heavily indebted economy.

Western powers warned Yanukovich against trying to smash the pro-European demonstrations, urging him to turn back to the EU and the prospect of an IMF-supported economic recovery, while Russia accused them of meddling.

Ukraine has been rocked periodically by political turmoil since gaining independence from the Soviet Union more than 22 years ago, but it has never experienced violence on this scale.

"We are now facing of one of the most dramatic episodes in Ukrainian history," opposition leader Yatsenyuk said in a video message after emergency talks with the president failed.

As the security forces moved forward, Klitschko, a former world champion boxer, reacted defiantly, telling supporters on the square: "We will not leave here. This is an island of freedom. We will defend it."

Earlier on Tuesday, the State Security Service (SBU), in a joint statement with the Interior Ministry, signalled the government's intentions. "If by 6 p.m. the disturbances have not ended, we will be obliged to restore order by all means envisaged by law," they said.

The riot police moved in hours after Moscow gave Ukraine $2 billion in aid for its crippled economy that it had been holding back to demand decisive action to crush the protests.

EU Enlargement Commissioner Štefan Füle said he had spoken to Ukraine's acting prime minister, who had given assurances that the authorities would try to avoid using live firearms.

A police spokeswoman gave a variety of reasons for the deaths including gunshot wounds, a traffic accident and heart attacks. One protester died in a fire.

Right Sector, a militant far-right group, added to tension by urging people holding weapons to go to Independence Square, also known as Maidan, to protect it from the security forces.

As protesters and police battled, Russia called the escalation a "direct result of connivance by Western politicians and European structures that have shut their eyes … to the aggressive actions of radical forces".

EU foreign policy chief Catherine Ashton, who has tried to broker a power-sharing transition, urged Ukraine's leadership "to address the root causes of the crisis".

Germany's foreign minister, Frank-Walter Steinmeier, telephoned his Ukrainian counterpart to warn against sliding back into violence and to urge the government to keep working for a political solution.

"News of a fresh escalation of violence is alarming. We are shocked to hear of the dead and injured today," Steinmeier said in a statement, raising the possibility of EU sanctions against Ukrainian leaders.

"Those responsible for taking any decisions that lead to the further spilling of blood must know that the reserve Europe has shown in terms of personal sanctions will be reconsidered."

According to the news website Zerkalo nedeli, German Chancellor Angela Merkel made several unsuccessful attempts to speak to Yanukovich, who didn’t take her calls.

Monday's $2 billion cash injection, a resumption of a $15 billion (€11 billion) aid package, was seen as a signal that Russia believed Yanukovich had a plan to end the protests and had dropped any idea of bringing opposition leaders into government.

While Russian President Vladimir Putin seems to have won the battle for influence in Ukraine for now, the protesters are not going quietly.

According from latest information from the website Leviy bereg, the protestors are slowly losing ground to the advancing special forces.

He said "The High Representative should urgently convene the EU Foreign Ministers to an extra-ordinary meeting of the Council on the escalating crisis in Ukraine. Today's violent and bloody clashes between the protesters and the police are a clear indication that the EU response so far has been inadequate.”

He continued “What was a tense and polarised situation is now spinning out of control with unpredictable consequences. The Yanukovich regime and the Party of the Regions seem to be unwilling to make real compromises and real efforts to defuse the situation, while the opposition and the protesters must make further efforts to rein in extremist elements and to secure the legitimacy of their cause by only applying peaceful means.

The Foreign Affairs Ministers should now consider a reinforced EU strategy to end the crisis in Ukraine. Such a strategy should be based on three elements:

- The urgent deployment of a High level EU mediation team to assist in the talks between the government and the opposition. - The finalisation of a substantial short and medium term financial support package for Ukraine. - The introduction of targeted individual sanctions and asset freeze of those officials involved in repressive measures against peaceful protesters and civil society organisations.”

The Chairman of the EPP Group Joseph Daul published a statement called “Do not kill your own Ukrainian people”.

“I am appalled by the horrific images that are coming from Kiev. Mr President, this must stop now!  I am making a human appeal to you to order for the security forces to stop the violence and withdraw. Democracy means dialogue and I hope it is not too late. Ukraine needs a peaceful and political solution to the current crisis. I call on you to take the necessary steps to make that happen.

The EPP Group stands firmly on the side of the peaceful aspirations of the Ukrainian people. I call on the EU Council President, Herman Van Rompuy, the European Commission, José Manuel Barroso and High Representative Lady Catherine Ashton to arrange an extraordinary meeting at the highest level at the earliest possible time to undertake the necessary steps to support the Ukrainian people. The EU should do whatever is in its power to stop a civil war in Ukraine,” said Joseph Daul.