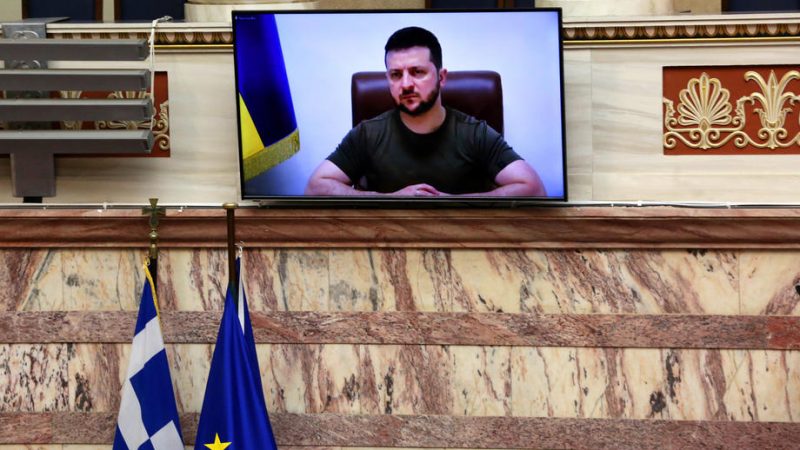 A speech by Ukraine President Volodymyr Zelenskyy to the Greek parliament on Thursday (7 April) was overshadowed by the inclusion of a video message from the far-right militia group, the Azov Battalion, that was addressed to lawmakers.

Addressing the Greek parliament via videoconference,  Zelenskyy called on Athens to put pressure on the EU to adopt stricter sanctions against Moscow.

However, a video showing a member of the Azov Battalion, which was broadcast to Greek lawmakers right after Zelenskyy’s speech, has triggered strong reactions in Athens.

“I have been waking up every day for more than a month thinking about Mariupol, which is being destroyed by Russian troops,” the Ukrainian president said.

“There are still 100,000 people on the border with Mariupol. There is no building left. Mariupol has been destroyed,” Zelenskyy added.

He stressed that “Ukraine is one of the Orthodox countries that was Christianised by the Greeks. In Ukrainian culture and history it will be seen that we will lose a big part of history if we lose the culture brought by Greek culture”.

“Freedom or Death was what your revolutionaries were saying. We are shouting the same today,” the Ukrainian president said, referring to the Greek Revolution of 1821.

Zelenskyy also called on Greeks to mount pressure on the EU and adopt stricter measures against Russia.

“We must close the door on Russian banks. No Russian ship should approach European ports. No acceptance on Russian tankers. With the money Russia earns, it destroys our cities,” he said, emphasising also the need for weapons, anti-aircraft equipment and armour.

Although all lawmakers present hailed the Ukrainian president’s speech expressing their support for Ukraine, a video message to parliament showing a member of the Azov Battalion describing the disaster of Mariupol overshadowed the event.

The soldier in the video message said:

“I was born in Mariupol, and I take part in the defence of the city from the Russian Nazis. I will not talk about the difficulties we have in defence, participating through the Azov Battalion. This is my debt to my city, my debt as a man and I must talk about the catastrophic conditions in which the Greek Mariupol is experiencing.”

The video of Azov Battalion’s soldier triggered the reaction of opposition parties as well as influential members of the ruling New Democracy party.

“The speech of members of the neo-Nazi Azov Battalion in the Greek Parliament is a provocation. The absolute responsibility lies with the Prime Minister Kyriakos Mitsotakis. He talked about a historic day, but it is a historic shame. The solidarity with the Ukrainian people is a given. But the Nazis cannot have a say in Parliament,” Syriza leader Alexis Tsipras posted on Facebook.

Similarly, former Prime Minister Antonis Samaras said allowing this video to be broadcast in the Greek House was a “big mistake”.

“The Greek government irresponsibly undermined the struggle of the Ukrainian people, by giving the floor to a Nazi. The responsibilities are heavy. The government should publish a detailed report of preparation and contacts for the event,” commented former foreign affairs minister Nikos Kotzias.

The socialists issued a statement asking why Greek lawmakers had not been informed about the video intervention of an Azov Battalion member and called on the president of the Greek Parliament to bear responsibility.

Mitsotakis issued a statement saying “Europe is called upon to immediately put out the fire of war that ignited in its heart the Russian regime. The heinous crimes that were committed should be punished”.

Meanwhile, government spokesperson Giannis Oikonomou said the inclusion of the Azov Battalion message was “incorrect and inappropriate”. However, he did not say who should be held responsible for this.