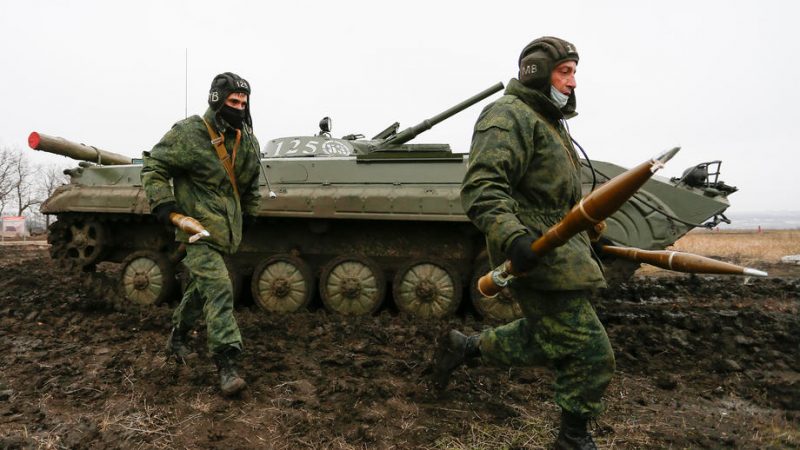 As the Biden administration warns that Russia could invade Ukraine “as early as 2022”, Russia’s massive military buildup on its Ukrainian border is a reminder of the Kremlin’s determination to prevent its former vassals from anchoring themselves in Europe. The transatlantic community must stand firm to avoid repeating strategic missteps made over the past 15 years, when it stood by as Russia swallowed large swathes of sovereign Georgian and Ukrainian territory.

Fortunately, the West hasn’t succumbed to Russian President Vladimir Putin’s hybrid war tactics in Ukraine, at least not yet. The US, France, Germany, and others have denounced Russia’s menacing military deployment while reiterating strong support for Ukraine’s sovereignty and territorial integrity.

But how long can Ukraine weather the storm? Moscow is doing its best to drive a wedge between NATO Allies.  Russia’s recent deployment of nearly 100,000 troops and heavy military equipment on the Russia-Ukraine border provides credulity to Ukrainian President Volodymyr Zelensky’s fears of a potential Russian-led coup against him. These latest developments follow years of Moscow’s sustained economic pressure against Kyiv. First, it is using the NordStream 2 pipeline to Germany to bypass Ukraine, thereby denying Kyiv both transit revenues and gas supplies. Second, Russia is suing Ukraine in a UK court over an unpaid Russian loan that Kyiv was forced to take out while Moscow squeezed Ukraine’s economy to intimidate it into not signing its association agreement with the EU eight years ago.

And as its political, legal, and economic squeeze takes hold, Moscow is trying to hijack the narrative by accusing Ukrainian troops of “shooting first” when they respond to Donbass separatists’ firing of Russian artillery with active support from Russian troops.  The Kremlin is also using the word “hysteria” to condemn Washington’s resolute response to Moscow’s turning of the screws against Ukraine, while also claiming that Ukraine “is not a real country.”

Fortunately, the Biden administration is working to counter Moscow’s false narrative.  As US Secretary of State Antony Blinken underscored in Riga on Thursday, “We’re also urging Ukraine to continue to exercise restraint because, again, the Russian playbook is to claim provocation for something that they were planning to do all along.”

Moscow deployed this same playbook against Georgia during the leadup to its invasion in 2008.  At that time, President Putin tried to delegitimize a popular uprising that could threaten his own rule in Russia and prevent Georgia’s democratically elected government from resolving separatist political conflicts in Abkhazia and South Ossetia. Above all, Putin was looking to quash the transatlantic aspirations of 85% of Georgians who saw their country’s future in NATO.

These inter-related goals triggered Moscow’s mobilization of armoured vehicles, which covertly entered Georgia in June 2004, concealed in a forest in Georgia’s breakaway region of South Ossetia.  Russian officials at the time vehemently denied Georgian reports of these movements as “hysteria.”  Many observers explained away Russia’s embargoes on imports of Georgian wine and other agricultural products as an understandable reaction to the determination of Georgia’s brash president, Mikheil Saakashvili, to restore Georgia’s territorial integrity.  And when Moscow issued Russian passports to residents of Georgia’s breakaway regions and then legally recognized their separatist political leaders, top European and US officials demanded that Tbilisi “show restraint.”

Putin’s executed his hybrid warfare campaign like clockwork. As Saakashvili grew increasingly vocal in countering Russian pressure, Putin portrayed Georgia’s leader as a provocateur, and with considerable effect.  As officials across NATO perversely worried that Georgia was dragging Russia into war, German Chancellor Angela Merkel thwarted then-US President George Bush’s push at NATO’s summit in Bucharest in April 2008 to set Georgia on a path toward NATO membership.  The former US president recently dubbed this failure at Bucharest his biggest foreign policy regret, recognizing that Putin would not have risked invading Georgia had the country secured NATO’s backing for membership.

To this day, many Westerners still blame Georgia for firing first in August 2008.  But it was Russia that provoked the shooting by permitting South Ossetia’s separatist militia to take the first shot over the heads of Russian “peacekeeping” troops.  Georgian troops returned fire, which, inevitably meant shooting toward Russian soldiers.

As Washington follows up the Biden-Putin summit and the EU worries about refugees along its border with Belarus and Russian natural gas deliveries, the transatlantic community must now show resolve. While Washington must defy Putin’s warning that additional US military aid to Ukraine is his red line, Germany’s new government can help by following the instincts of the Green Party to block the NordStream 2 pipeline. We can no longer placate business interests by soft-pedalling to Russian aggression in Europe’s east.