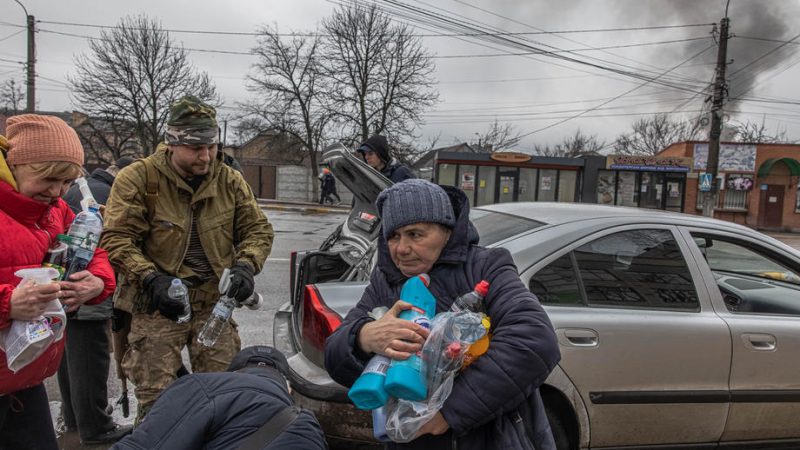 An elderly woman receives water and cleaning products distributed by Ukrainian military members to local residents as behind is seen smoke from a shelling, in Irpin city, Kyiv province, Ukraine, 3 March 2022. [EPA-EFE/ROMAN PILIPEY]

Despite the duress of war, people try to preserve the possible normality in big cities. Electricity and heat supplies in heavily damaged areas are getting fixed, and food is supplied for the population, writes Roman Rukomeda.

Roman Rukomeda is a Ukrainian political analyst. This is his seventh account of Russia’s invasion into Ukraine, which he succeeded to send to EURACTIV despite limited internet access.

The eight days of the war in Ukraine feels like eight years for many Ukrainians. During combat, the time flows totally different from during peace. The mind tries to stick to the pieces of the old habits and routine, but the new reality ruthlessly takes over.

Despite all the pessimistic forecasts, Ukraine continues its resistance to Russian aggression. Massive destruction of civilian houses is perpetrated by Russian rockets and bombs all over Ukraine.

The heaviest airstrikes and attacks took place in Kharkiv, Chernihiv, Sumy, Mariupol, Kherson, Kyiv and small towns around them. Some of these places are turned into complete ruins. Tens of civilians have been killed, and hundreds were wounded.

Despite that, Russia does not allow corridors for civilians to evacuate. Russian terrorists violate all possible international laws, including international humanitarian laws. As proof of this, many Russian prisoners claimed that they had received the order to shoot at civilians.

Now Russian terrorists are massively doing that in all regions they enter on Ukrainian territory. In some cases, they intentionally hunt for the heads of local administration who are trying to organize the functioning of local infrastructure despite the Russian attacks.

Overall, energy stations are now one of the priority goals for Russian war criminals who continue bombing hospitals, schools, kindergartens, and local municipalities. Another worrying moment is that Russians are placing mines in the towns and cities they enter, perfectly understanding the damage to the civilian population, especially children, these mines would do.

Speaking about Russian war crimes, they bombard Ukrainian territory with cluster and vacuum bombs forbidden by the Geneva conventions. The devastation for civilians by such weapons is extremely heavy.

However, people are trying to preserve the possible normality in big cities. Emergency services are trying to repair the electricity and heat supplies to heavily damaged areas of civilian infrastructure.

Small coffee shops, supermarkets and grocery stores try to supply the population with food and other necessary products. Drug stores are partially open, providing people with medicine and some hospitals. People have now got used to the signals of air attacks. New reality forms its own pattern and new models of behaviour.

Despite problems in the south, Ukrainian armed forces have had some military successes in the North and East. In some areas, they started to counterattack, throwing Russian aggressors back to the national border of Ukraine, like in the Sumy region.

There are also military successes in the East and around Kyiv. Each day of war costs Russia about 1000 killed soldiers and several thousand wounded. During eight days of the war, Russia already suffered human losses bigger than in the first and second Chechen wars and is getting closer to the numbers close to casualties of the Soviet Union in Afghanistan during ten years of occupation.

Each day of war drinks the blood and souls of thousands of people. The blame is personally on the Russian president and his close associates.

So far, there are no signs from the Russian side about readiness to stop this madness. The world seems to be unable to do it despite the desperate requests of Ukraine, which is now losing the lives of its best sons and daughters trying to stop Russian aggression for peace in Europe and the world.