Double standards abound, but only Russia is to blame for its imperialist war in Ukraine 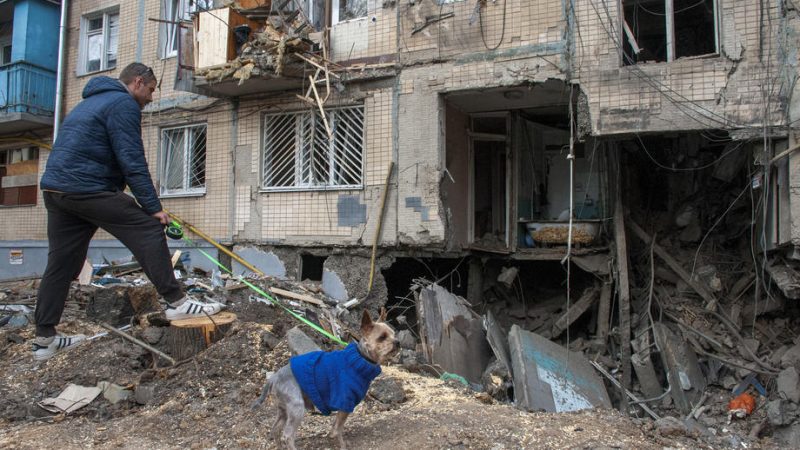 epa09883369 A man with a dog looks on a destroyed in a shelling residential building entrance in Kharkiv, Ukraine, 10 April 2022. EPA-EFE/VASILIY ZHLOBSKY

The West is guilty of double standards regarding its attitude toward Russia and Ukrainian refugees, but this should make us more opposed to Russian imperialism and its destructive aftermath, argues Sidita Kushi.

Sidita Kushi, PhD, is an assistant professor of political science at Bridgewater State University and a Non-Residential Fellow at the Center for Strategic Studies (CSS) at the Fletcher School of Law and Diplomacy, Tufts University.

Russia continues its invasion and occupation of Ukraine, eroding decades of international norms against territorial conquest and leaving behind evidence of mass crimes against civilians.

Yet many analysts have co-opted this gruesome moment to critique the long history of Western militarism, regime change, and imperialism. For instance, some have drawn flawed parallels between the NATO intervention in Kosovo in 1999 and Putin’s invasion of Ukraine today.

These voices claim that the West cannot and should not critique or respond to Russia’s aggression due to the West’s moral failings.

It is easy to find hypocrisy in the West’s treatment of Russia’s invasion of a sovereign state, as the U.S. and NATO have a long list of regime change and proxy wars to their names, such as in Iraq, Libya, and Yemen.

As the world opens its arms to Ukrainian refugees, it is easy to critique the double standards seen in the West’s hostile treatment of refugees from Libya, Syria, and other non-European countries. This bias is blatantly apparent in the media and the rhetoric of political elites who warmly welcome Ukrainian refugees but less so others.

As my research empirically confirms, the West pursues many damaging military interventions against sovereign states, interventions which have only grown in frequency and intensity since 2001. It is also true that the international community continues to value the plight of Western citizens more so than others.

However, acknowledging these faults in Western foreign policy should not obscure the focus of today’s atrocities – Russia’s imperialist ambitions and legacy of unprovoked aggression in its neighbourhood.

While double standards are evident, they should instead make us more opposed to Russian imperialism in Ukraine and its destructive aftermath.

Moreover, while both the EU and NATO may behave as empires, they have become empires by invitation when it comes to new state memberships. In contrast, Russian imperialism is fully one of coercion and domination and is currently solely responsible for the deaths in Ukraine.

My co-authored research with the Military Intervention Project reveals a dramatic rise in U.S. military interventions abroad, both in frequency and hostility levels against target countries, especially after the Cold War. These interventions often have disastrous consequences for both states.

It is, thus, no surprise that in recent years many domestic and international audiences see U.S. power and influence as a growing threat to global security and peace.

U.S. military interventions harm foreign and domestic citizens alike, and they diminish U.S. security, thus weakening both humanitarian and interest-based justifications and outcomes. Instead of spreading democracy, these interventions tend to transform target states into illiberal democracies at best.

They promote anti-American sentiments and violent civil violence and blowback. Ultimately, they rarely contribute to long-term humanitarian outcomes for those on the ground.

Therefore, there is strong empirical reason to criticise the U.S. military record abroad and the West’s foreign policy hypocrisies. Yet it is important to distinguish NATO’s and the transatlantic sphere’s member-driven “empire by invitation” from Russia’s regional dominance by coercion and force.

Russia is committing crimes against humanity against Ukrainian civilians as an invading revisionist power with imperialist ambitions across its history and contemporary policies in Chechnya, Georgia, and Crimea.

The West’s own imperialist record should only make us more likely to recognise and condemn this reality.

The West’s tainted international record is not an excuse to tolerate Russia’s imperialistic demands for a privileged sphere of influence today.

Acknowledging the West’s inconsistent defence of human rights and sovereignty is not an invalidation of those norms and principles themselves but rather an indictment of influential actors who cynically co-opt them when strategically useful and cast them aside when not, as Russia often does.

To counter the double standards, we must understand why the West inconsistently champions human rights in some cases but not in others.

My other line of research shows gaping inconsistencies in the phenomenon of humanitarian military intervention – a practice in which third-party military interventions attempt to stop human rights abuses against foreign citizens, often co-opted by geopolitical agendas.

I have argued that where the conflict occurs is the primary factor in whether the West prioritises humanitarian concerns, even supplanting the explanatory power of national interests, economic linkages, and human rights abuses on the ground.

This regional bias alters policy options and, ultimately, policy choices for outside actors during times of crisis.

The regional variation can also serve as a proxy for institutional resource capabilities and resource sharing, the chances of mission success and even state identities, similar to the concept of a good vs bad neighbourhood originated by Robert Keohane.

Ultimately, however, this regional bias divides the world into groups of people who are more worthy of protection than others.

Then according to my research, is it understandable why Ukraine is receiving a flurry of Western support (albeit not a direct military intervention) during its grave humanitarian crisis. It is also understandable why other regions of the world suffering from state-sponsored violence or external invasion are not.

The double standards are clear and loud in data and history. Nonetheless, the answer does not lie in punishing the victims of state aggression for the international community’s complicity in hypocritical standards of behaviour, often driven by the pursuit of geopolitical interests. The solution is to bring awareness and delve into the causes of these double standards, whether due to geopolitics, regional biases, or other factors and then narrow the gap.

Equalise Humanitarian Practices, Not Shatter them for All

Thus, my research on both U.S. military and humanitarian interventions seeks to limit the abuse of humanitarian norms for geopolitical gain while allowing space for humanitarian intervention against crimes against humanity as a last resort. We can oppose Western imperialism, wars of empire-building, aggression, and regime change while promoting policies that protect foreign citizens from invaders or state-sponsored crimes. We can critique the Western double standards of militarism all while supporting Ukraine’s sovereignty and the Ukrainian people’s human rights today – all while condemning in the harshest terms Russia’s ongoing legacy of regional domination and conquest, hidden under the veil of a privileged sphere of geopolitical interest.

The problem does not lie with the international principles of state sovereignty, self-determination, or humanitarian norms but with the inconsistent application of these principles by powerful actors everywhere. Don’t make Ukraine the martyr at the altar of power politics.