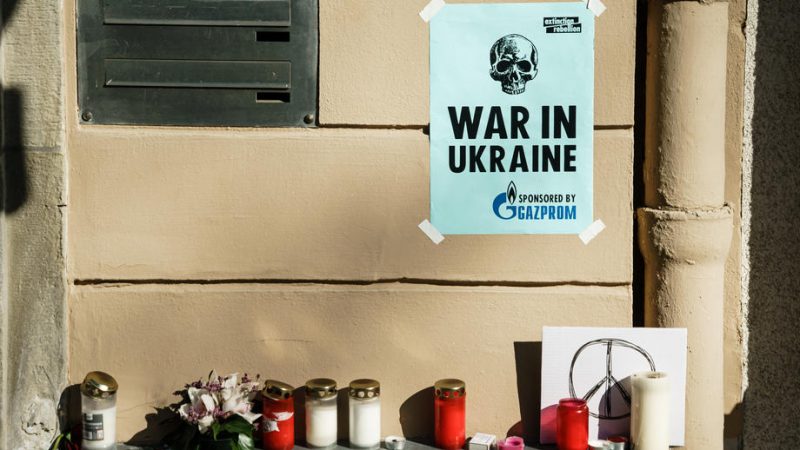 A placard of the climate activist's organization 'Extinction Rebellion', part of a vigil, is reading 'War in Ukraine, sponsored by Gazprom', in front of the Ukraine embassy in Berlin, Germany, 1 March 2022. [EPA-EFE/CLEMENS BILAN]

According to some estimates, switching off the Russian oil and gas pump for just two months may be sufficient to starve the war machine of resources and force Russia to abandon its aggressive war, writes Kateryna Markevych.

On February 24, Russia unleashed the war aimed at the total annihilation of the Ukrainians. Every passing day brings artillery attacks, aerial bombings, and blockades of Ukrainian cities. The world continues to receive shocking news of atrocities committed by Russian soldiers against civilians. Hundreds were tortured and killed by gunshots to the head in Bucha and Irpin. Thousands died under rubble and from shrapnel wounds in Irpin, Borodyanka, Kharkiv, Izum, Chernihiv, Sumy, and dozens of small towns around Ukraine. Many cases of rape of women and children both girls and boys are recorded by the International Criminal Court prosecutor.

The civilized world including the EU condemned Russia`s aggressive actions. However, paradoxically, European countries continue to support the aggressor financially by buying Russian energy resources. According to the IEA, Russia’s revenue from energy resource exports based on present market prices is more than $1.1 billion a day. This can buy around 160 Kalibr cruise missiles or 95 Su-25 fighter-bombers both used to level Ukrainian cities with the ground.

Outraged by the brutal and unprovoked invasion and shocked by the evidence of war crimes against Ukrainians, many countries have already imposed sanctions of varying severity against Russia creating challenges for its banking and industrial sector and crippling its military production. Sanctions against the Russian Central Bank resulted in approximately 60% of the country’s total foreign exchange reserves or $380 billion being frozen. Consequently, the repayment of foreign currency debts and maintaining of the fiscal solvency of the state present challenges.

The west has shown impressive unity and resolve and yet the sanctions already in place are not enough to stop the brutal war. Russia has a soft pillow of oil and gas revenues helping the war budget stay afloat. Revenues from the oil and gas exports account for 38.1% of all federal budget revenues. For instance, Russia`s oil and gas exports profit in 2021 amounted to $119 billion. According to Bloomberg, this year Russia is expected to earn more than $320 billion. Thus, imposed sanctions regarding the foreign exchange reserves are nothing compared to the possible profits from the exports of energy resources. Further, since the beginning of the war, the EU paid Russia about €40 billion for energy resources, while Ukraine received around €1.5 billion of support from the EU. Ukraine is grateful to its European partners for all the support it is receiving but legitimate questions arise about Russian oil and gas revenues which continue to co-finance the war against Ukraine.

As it happens, European countries have been dependent on Russian gas for decades and planned to increase this dependency by building new gas pipelines. 45% of Russian gas exports go to the EU (155 billion cbm in 2021). The most vulnerable are Germany (according to the IEA in 2020, the country consumed 42.6 bcm) and Italy (29.2 bcm).

In March, the EU rejected the idea of abandoning Russian gas alleging that this will affect European energy security. However, as Russia moved to ugly tactics of razing Ukrainian cities  and killing civilians en masse, Europe reconsidered its position. On 7 April, the European Parliament called for measures against Russia, including “an immediate full embargo on Russian imports of oil, coal, nuclear fuel and gas”. The EU started to work on steps toward zero imports of natural gas from Russia. The largest energy company E.ON has suspended Russian gas purchases. But these steps are not enough to stop the bloodshed. Despite some practical obstacles, it is possible to replace the Russian commodity by buying more gas from Qatar, Algeria, Azerbaijan, or Norway. Also, the US promises Europe that it will deliver an additional 15 bcm of LNG by the end of 2022. It is also possible to partially switch to alternative energy sources (accelerate the deployment of solar and wind energy projects), increase energy efficiency, and return to the operation of nuclear reactors (some of them were closed in 2021, others were planned to close by the end of 2022).

Regarding oil, Europe has not officially banned Russian imports, but it is partially happening. According to the Argus agency, European refining companies partially reorient to alternative Norway oil Johan Sverdrup, which is similar to the Urals in quality. The IEA estimates that due to the boycott of private companies (like Shell, BP, and TotalEnergies) and the US oil embargo, Russian exports will fall by 3 million barrels a day in April and May (on average, Russia sold 5 million barrels a day in February).

However, the Russian budget continues to receive profits: the price of Urals oil as of 15 April, was $79 per barrel, while the Russian budget for 2022 is based on the price of oil at $44.2 per barrel. It is possible to find alternative oil suppliers to Europe. So far, to meet European demand OPEC members have agreed to a modest increase of production and further increases could be explored.

According to some estimates, switching off the Russian oil and gas pump for just two months may be sufficient to starve the war machine of resources and force Russia to abandon its aggressive war. Yes, this creates negligible risks for European economies but they will be nowhere near to the economic risks Ukraine is currently experiencing or which Europe will experience if Russia is not defeated in Ukraine. Germany’s GDP is forecasted to decline in a range between 0.3% and up to 3% in the most pessimistic scenarios, France’s GDP – around 0,15% to 0,3%; the rest of the Eurozone between 0.8%-2.2%.  Meanwhile, Ukraine’s economy is expected to decline by a staggering 45%. A prolonged war and potential Russian aggression against other European nations will increase the risks of an economic downturn in Europe and will create structural challenges for the world economy.

Interestingly, despite some inflationary effects (according to Eurostat, in the euro area the inflation rate rose in March to a historic high of 7.5% from 5.9% in February), nearly 70% of Europeans want to “switch off Putin” by boycotting Russian oil and gas. European leaders have the momentum now before popular support for decisive action wanes.

Europe must learn the lesson of history – Russia can only be stopped by decisive action, not by appeasement. In response to the Russian invasion of Ukraine in 2014, the European community only “rattled the nerves” of the aggressor, continuing cooperation in various areas. Europe`s inaction over the past 8 years has allowed Russia to build up financial resources, military-technical power, and resolve to launch a full-scale offensive against Ukraine. The world is yet to see more horrible footage from Mariupol and the rest of Donbas which is being bombed at this very minute. The EU must act now to protect freedom, liberty, humanity, and its own security. Now is the right moment to cut Russia off from all possible financial revenues that fund the atrocious war against Ukraine.