Europe’s solidarity with Ukrainian refugees must transform our asylum policy 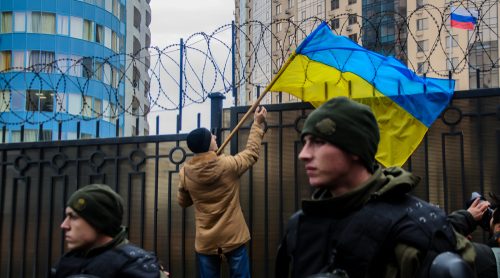 The extraordinary demonstration of European solidarity to Ukrainian refugees has laid the ground for an unprecedented chance to overhaul longstanding gaps in Europe’s ability to respond to refugee arrivals, argues Harlem Désir. [Shutterstock]

The extraordinary demonstration of European solidarity with Ukrainian refugees has laid the ground for an unprecedented chance to overhaul longstanding gaps in Europe’s ability to respond to refugee arrivals, argues Harlem Désir.

Harlem Désir is Senior Vice President for Europe of the International Rescue Committee.

Since the start of the war in Ukraine, we have seen an outpouring of support from European citizens, civil society organisations and governments. The resolve demonstrated across Europe to help people in need, quickly and humanely, is impressive. It also presents an unprecedented chance for overhauling longstanding gaps in Europe’s ability to respond to refugee arrivals. Europe must avoid repeating past mistakes and seize this opportunity to establish a humane and efficient system to manage new arrivals.

Over the past few days, I have been in Poland with the International Rescue Committee’s emergency teams. The humanity and generosity shown by the Polish people to welcome those fleeing crisis is overwhelming – demonstrating, as people have done in cities across Europe, their strong desire to help refugees.

At a train station in Przemysl and in the village of Medyka on Ukraine’s border, I met traumatised refugees – mostly women and children – who have fled the bombing of their cities and the horrors of the war.

Those arriving in Poland now have fewer contacts in EU countries than those who fled at the beginning of the invasion. They need protection against the risk of abuses and human trafficking, support, warm clothes, food, sanitation kits, psychological support, and vital information to begin rebuilding their lives.

Poland and the other countries neighbouring Ukraine will need strong support to avoid reproducing the situation that unfolded in Greece as it sought to manage arrivals from Syria.

In 2015, the Greek public welcomed people arriving from Syria and the region with open arms. Yet, over time, community relations became strained – a direct result of policy failures and Europe’s longstanding inability to agree on a comprehensive, fair and humane system to manage arrivals. One that should be based on responsibility-sharing, safe routes to protection and a fully-resourced system to promote integration support.

Seven years on, refugees and asylum seekers from Afghanistan and Syria, whose stories are strikingly similar to those families fleeing Ukraine, continue to languish in Greece in limbo due to the lack of solidarity of other member states.

Many are trapped in camps surrounded by barbed wire and others without access to basic needs like food and shelter, unable to participate economically, culturally or socially in their host communities.

This time around, Europe needs to get its response right – for Ukrainians and people fleeing other crises around the world, including Afghanistan, Ethiopia, the DRC, Yemen and Syria.

First, all EU states – and not only those neighbouring Ukraine – must continue scaling up their capacity to meet emergency needs. Volunteers have bravely stepped in to fill the gaps in emergency provision but are already signalling the urgent need for better coordination and systemic support from the authorities.

European countries must be transparent about the needs they can or cannot meet – and promptly request and facilitate the support that has been offered by the EU, its agencies and other states. Mobilising a pan-European response is the only way forward.

Second, beyond this emergency phase, the EU must translate this momentum into a durable and longer-term response, including supporting new arrivals to rebuild their lives. The IRC’s experience in supporting refugees across Europe has highlighted the importance of investing in quality integration support from day one – including helping people to find work and affordable housing, strengthen their language skills, and enrol their children in schools.

Now is the time for countries to implement the EU Action Plan on Integration and Inclusion recommendations published in 2020. National authorities must make full use of the various financial instruments the EU plans to make available – in full coordination with local actors critical to the response.

Given the scale of the current emergency, we welcome the Commission’s recently proposed CARE programme to make a range of funding tools available for the refugee response. Beyond this, states must also be allowed to modify or establish new elements of their recently agreed National Recovery and Resilience Plans, allowing them to maximise opportunities for new arrivals to contribute economically, socially and culturally to their host communities.

Lastly, while the ad-hoc efforts from Ukraine’s neighbours in recent weeks have been remarkable, it is more apparent than ever that structural reforms to the EU’s asylum and migration system are long overdue.

The system that trapped people in legal limbo on Europe’s borders in undignified conditions, separated from family, and without the documents to rebuild their lives is not fit for purpose. States’ incredible response to the Ukraine crisis demonstrates that Europe can respond to new arrivals in a spirit of solidarity and responsibility-sharing – if it chooses to do so.