‘I am absolutely proud of the Ukrainian’s resilience’ 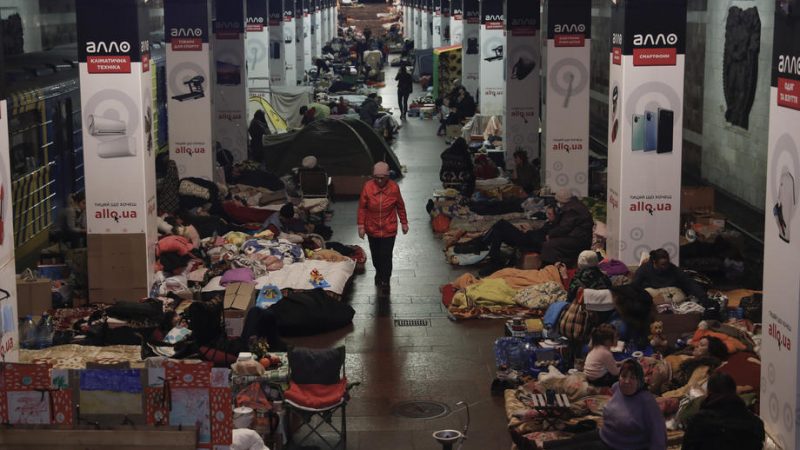 People take shelter in an underground metro station in Kharkiv, Ukraine, 8 April 2022, amid the ongoing Russian invasion of the country. [EPA-EFE/ATEF SAFADI]

The war that Russia launched against Ukraine completely changed Ukrainian society and made people reveal the qualities that they did not express in peaceful life, and one of these important qualities is sacrifice, writes Roman Rukomeda.

Roman Rukomeda is a Ukrainian political analyst. This is his 37th account of Russia’s invasion of Ukraine, which he succeeded to send to EURACTIV despite hardships and limited internet access.

The 45th day of war is coming to an end. Since the beginning of the war, tens or even hundreds of Ukrainians, military and civilian, sacrificed the most valuable thing they had – their lives.

It was the soldiers and officers who sacrificed themselves while blowing up bridges to hinder the Russian’s advancement. The pilots of helicopters knew they had zero chance of survival but still tried to reach Mariupol and other towns to rescue fellow citizens. Volunteers lost their lives trying to deliver food and medicine to the people in the attacked cities of Chernigiv, Kharkiv, Sumy and other smaller villages. It was those who were killed by the enemy while attempting to rescue pets that were abandoned and starving in their homes.

One of the stories of sacrifice is the story of a Ukrainian businessman. He left his home near Kyiv but spotted Russian soldiers on his property with the help of his remote security system. He saw that more than 10 artillery systems, MLRS and other armoured vehicles entered his yard and started to prepare for shelling the Ukrainian capital. Without hesitation, this man contacted the Ukrainian Armed forces, gave them the coordinates of his house and asked to destroy all Russian terrorists and his home before they attacked Kyiv. They did precisely that and saved the lives of countless residents of Kyiv.

Sacrifice performed by Ukrainians takes different forms. It can be financial support. For example, there are cases when older adults who receive their 4000 UAH pension (€125) donate about 3000 UAH of it to the Armed forces of Ukraine, retaining just the bare minimum for themselves. Or when small children who saved money to buy toys asked their parents to send all their saved money to the exact cause. Furthermore, many Ukrainians have voluntarily given their cars for the army’s needs during these times.

Extreme situations give birth to unseen and unexpected reactions, feelings and deeds. Such feelings as a personal sacrifice through finances, personal belongings, houses or even lives demonstrate the will of the Ukrainian people to protect their country at all costs.

Before the war, we, Ukrainians, often had internal debates, discussions, and even quarrels about politicians, internal development issues, or even defence. But never before did we know how heroic our people could be and how touching and noble their deeds and actions are.

It makes me proud of being Ukrainian and gives me firm confidence about Ukraine’s victory in this awful war against Putin’s Russia.

This war is a big revelation for the Ukrainian people about ourselves and our resilience. We consistently underestimated our character, readiness for mutual support and empathy for each other and our values.

It taught us that we are better than we used to think about ourselves. This new truth and self-understanding will help us build our new life, which will be different from the previous one, which ended just 45 days ago.